I have just got back from a very hot week on a small lake in the Champagne Ardenne region of France. It was originally booked in 2019 for May 2020, but with all the madness in the world, was delayed until now and on a different lake to the one planned. 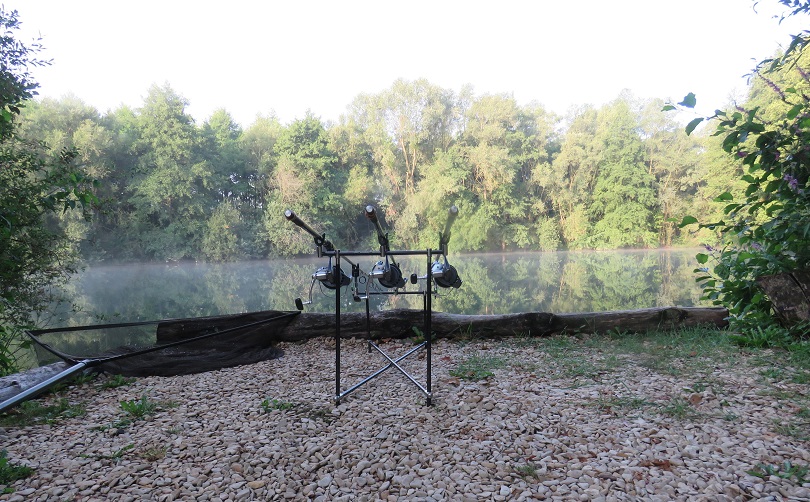 It was around 36 Deg. C when we arrived on the Saturday and the forecast showed similar, with every day for the next week being over 30 degrees C. It wasn't going to cool down much at night either, so hardly ideal fishing conditions,

On the first afternoon there was some “clouding and fizzing” in the middle of the lake (unusual on these venues), so being dog tired after the 17-hour journey and the oppressive heat, I lazily spread my rods in this area and lightly baited (not really expecting anything). I was pleasantly surprised by a 28lb 6oz mirror at around 4am. By lunchtime on the Sunday, I had not seen a sign of any more fish in the area, so it was time to try and find some spots on the far tree line. I found 3 likely spots where the depth was around 6 feet and where I could cast safely to the side of the overhanging branches. 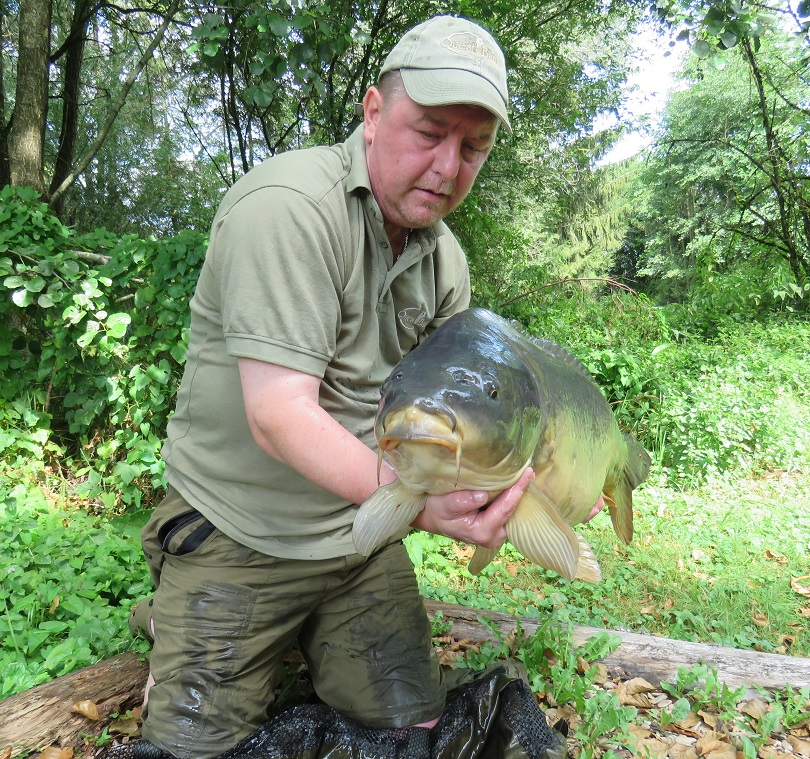 Now because of the conditions, I would be baiting very lightly (fishing for one bite at a time) and hopefully building the spots up as the week went on. I put 25 to 30 Rahja Spice boilies, 2 handfuls of pellets and 2 handfuls of particle over each rod (spread over an area of around 10 feet), This would be topped up after every bite. Also, the fact that I was fishing to features had an influence on my baiting approach. The carp will naturally patrol these areas, so just use enough bait to catch them, not feed them. Totally different when fishing open water, when you will use more bait to draw the carp in and the try and hold them in an area. 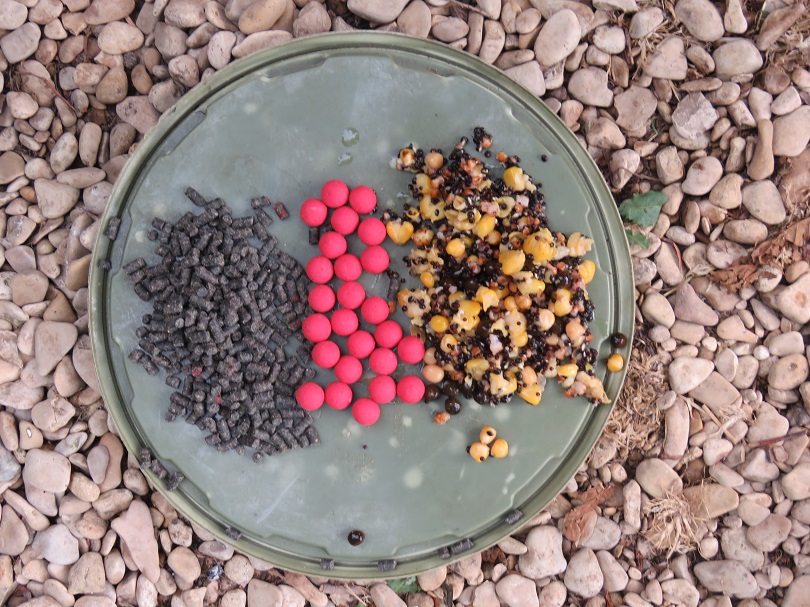 Just enough for a bite!

That’s the main reason for writing this piece. Too many anglers think you have to fill it in when going to France. I have always found this is far from the truth. You must consider many factors such as the weather, stocking levels, open water fishing or fishing to features etc. As I mentioned the weather was far from ideal (even at night, it was too hot to sleep on top of the sleeping bag, with just a t-shirt and shorts on)

I didn't think the carp would be that interested in feeding, so the baiting levels were kept to a minimum. Shaun once made the analogy of a human being not feeling really hungry, you put a big 5 course meal in front of them and they will ignore it. However, you put a small portion of something they really like, in front of them, they will pick at it and probably come back for more. The same can be seen in carp fishing in poor conditions.  You bang 5 kg of boilies straight in and they will probably be ignored. However, a light baiting over an area (with something they like) will get the carp picking at it and returning for more.

That's how this week turned out, with 13 carp and 2 bream finding the back of my landing net, They were a good average size (30lb +) with the biggest being 44lb 8oz. I was leaving the rods in for up to 23 hours without disturbing them. I would have left them in longer, but we had to reel in at 6pm to go for dinner. I didn't really mind this though, as the food package we had ordered was excellent throughout the week, with each meal being very enjoyable. 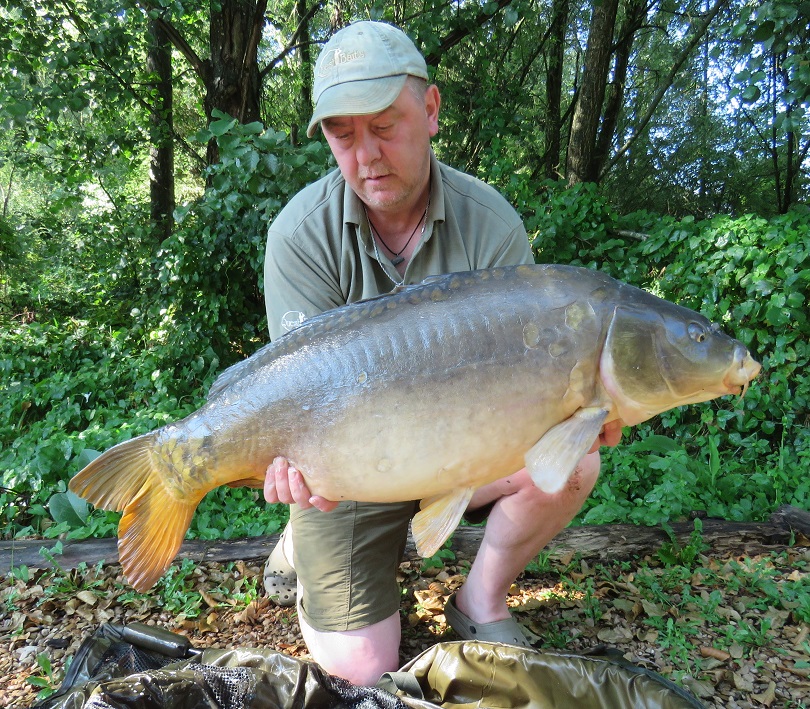 The bait had been in for 23 hours when this one had a munch.

Talking about leaving the rods in for a period of time, it always amazes me the number of anglers that reel in first thing in the morning, only to cast or send their bait boat out to exactly the same spot and deposit more bait into the swim. Why would you want to do this when you haven't had a bite? You know the rig is fishing properly on a spot you have already primed, so why fetch it in and place more bait on top of the bait that is already there?

To illustrate the point about baiting levels, the lad I shared the lake with had only had one carp by Wednesday and yet he had used twice as much bait as me (and I was catching steadily). I told him of my baiting approach, he changed his and ending up having 3 runs in the next 36 hours.

We didn't fish on the last night as heavy rain was forecast and we didn't want to be travelling back with a load of wet gear. But all in all, a nice peaceful and interesting week that came to an end far too quickly! 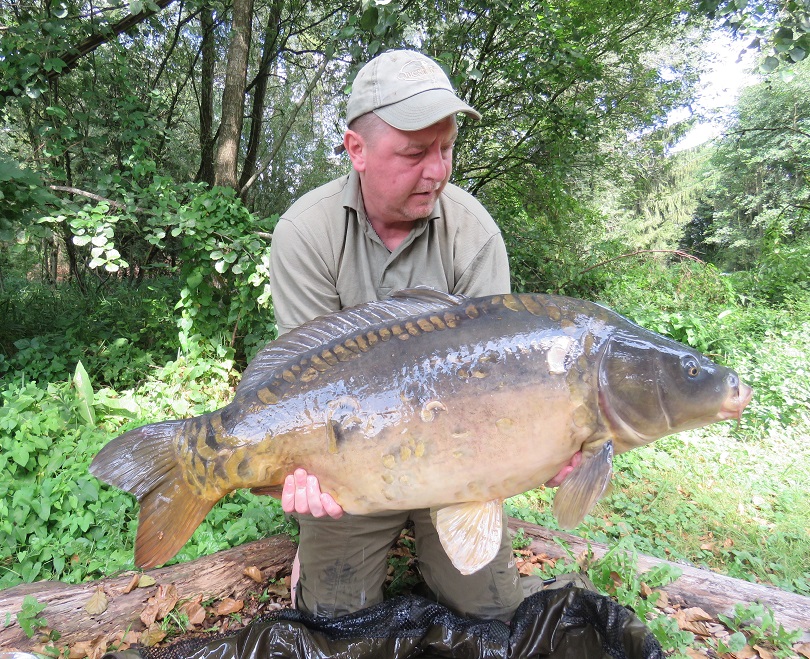 The biggest fish of the trip at 44lb 8oz, that couldn't resist the Rahja Spice!


About the Author: Pat Gillett 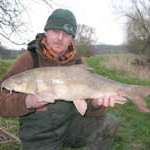