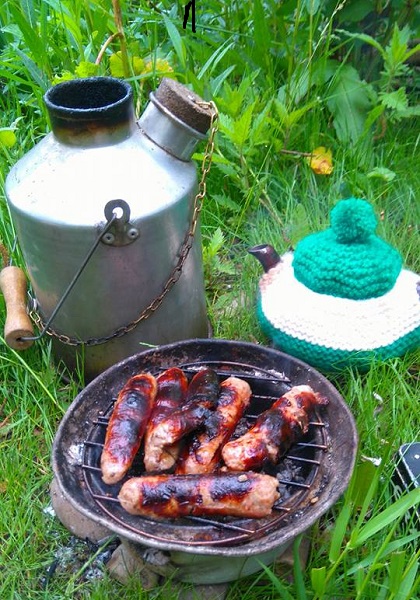 The sausages ended up being cooked longer than usual.

Saturday 4th June 2016 (actual diary extract)
I actually managed a lay in until 7.45 am! I needed it though; as this none drinking of alcohol throughout the old 3 month closed season has not been helping me in the sleep stakes.
I left the rods where I had cast them the previous afternoon and sat staring at the water through the regular smoke screen of the Kelly Kettle brews. Life felt good and by 9 am my mind had wandered to some sausages and the ‘Billy no Mates’ barbeque grill that fits the fire pit of my kettle. They were just about cooked when a drop back on a Rahja Spice pop up had me muttering very tongue in cheek…

“Typical, just when I was going to eat”!

I played it heavy as I needed to keep it near the surface. I’d hooked it in just a couple of feet of water but between me and it was a deep channel that ended 50 m out where the water became shallow again and a thick bed of Canadian grew on the ledge. The P.B. super Strong size 8 held as it always does and soon an absolutely beautiful scaly mirror slipped into the net. 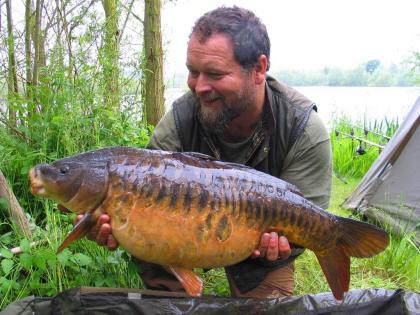 So here I sit now happily satisfied by my capture and a fell stomach too whilst the kettle fires away yet again.

Sunday 5th June 2016
Things hadn’t seemed right yesterday and all was to become clear. 9.30 am Dave Jacombs rang from the other side of the islands to say that the fish had started to spawn over that side. With that we both started a slow pack up in the hot, bright conditions.

I asked if he fancied a drift around in the boat, the water clarity was excellent and as he’d only been out in the winter during a work party he jumped at the chance. To say we both had our eyes opened is a complete understatement. We have a lot more larger fish swimming the depths than I had actually realised. I’m looking forward to meeting those fish on my mat.

It turned out that the fish never actually kicked in spawning properly. Most of the fish we had seen were just going about their everyday business and only around a dozen in total were having a bit of a thrash around. We left them to it anyway.

Back at the same B.C.S.G. water and despite finding some fish they really didn’t look like they were up for much of a feed and by Sunday morning I had moved my rods off my lightly baited spots in order to try and tempt one on a single bait. I think to be fair that by this stage they were well aware that they were being angled for so reluctantly I packed away in the rain and forced myself to pull my finger out and try and find some fresh fish in another area to angle for. 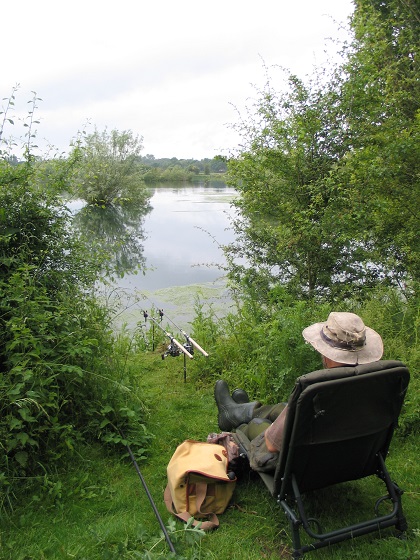 I pulled my finger out and found some different fish.

Suffice to say, a couple of hours in a fresh area produced me a couple of chances which saved the blank. Unfortunately I had my first hook pull of the year on this venue and typically on what appeared to be a decent fish. A smaller consolation prize comforted the blow a little and then not wanting to be greedy I fed the swim and left. 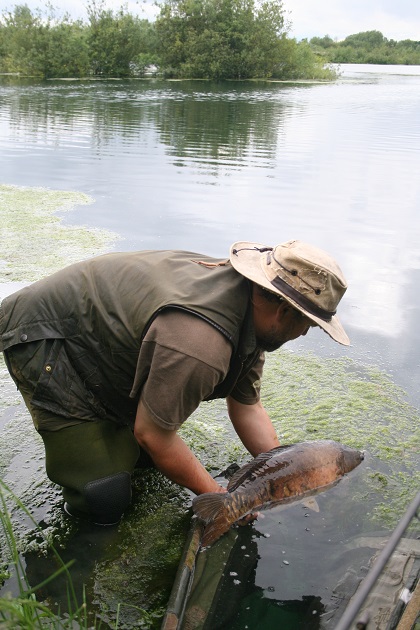 A few minutes in the right spot

At last, it’s here again, a very special day in the angling calendar, the ‘Glorious 16th’, the opening morning of the new river season. Well, I wrote about this here http://www.questbaits.com/blog/shaun-harrison-opening-morning-june-16th-2016/ so won’t cover it again.

Despite such an enjoyable start to the river season I very much still have my carp head on and after a couple of frustrating sessions at one of our B.C.S.G. waters where the fish still haven’t spawned properly, I decided to leave them to it for this weekend and returned to Stobbart’s.

A few were there when I arrived and I quickly chose a swim in terms of having plenty of water to tackle rather than where I saw the fish. Stobbart’s gets busy and as with all busy waters I try and choose my swim in the long term rather than for the immediate as it’s often not possible to move due to it being busy. I was content in the swim I’d chosen and typically set up with my rigs close in as it is the quietest bit of water on the pit. Most seem to turn up on auto pilot, get the marker out at 70-100m and then attack it with a Spomb. Each to their own, I guess but, I like to be different and it is so easy to be different there and not follow the crowd. 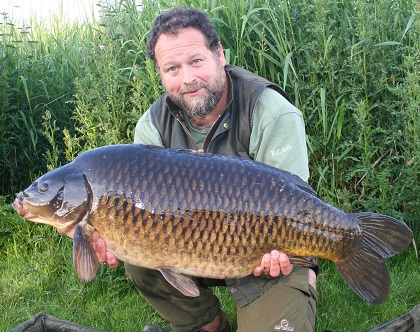 This was the first fish I landed but I felt I wasn’t really on the fish so moved for the afternoon in an area that had been left alone. 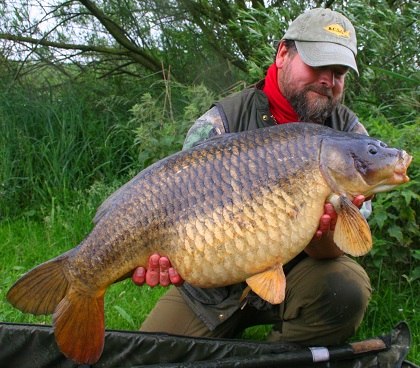 Another one out the edge!

It didn’t take me long to catch fish number two. It had been a great fight but unfortunately right on top of where I’d got them feeding on my broken Rahja Spice boilies. I was more than content with my two fish and with the rain starting to fall, I decided on an early pack up.

The British Carp Study Group social weekend and A.G.M. My favourite social of the year and as usual I simply set up my bed and shelter up away from the water after first attending a ‘Steering Group’ meeting and then got on with socialising for the Friday night, Saturday and Saturday night.

What legendary week-ends these have become. Late Saturday evening the heavens opened and the different groups of chat all scuttled off to find whatever shelter there was. I ended up in the back of a van along with Oli, Julian Weaver, Pete Springate, Dave Gawthorn, Robin Dix, Simon Hartop, Les Bamford and Alan Marenghi. 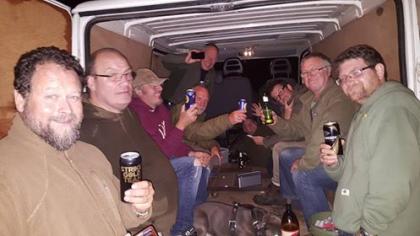 The rain stopped and we spread back out

Had you told me years before that I would be sat in a van at a B.C.S.G. social listening to the Sex Pistols through a Blue Tooth speaker. I’d probably have applied to join years earlier LOL!

Everything cleared and tidied up after the fun and frolics of the previous couple of days and already being in the Colne Valley it seemed the natural thing to do to stay in the area for a couple of nights angling on another of our B.C.S.G. waters I’d not previously fished and what a stunning venue it turned out to be. I take my hat off to the bailiff team that have managed to keep all the swims very natural looking. 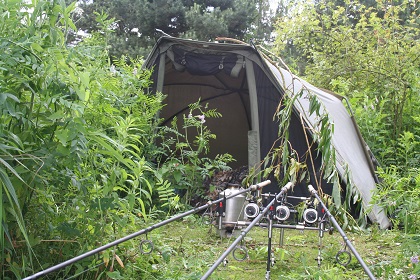 I take my hat off to the bailiff team for keeping most of the undergrowth intact.

I was there with Ron Key and it took us 2 x laps of the place before we spotted some fish and fortunately in an area that covered 2 swims so tossing a coin Ron ended up in the left (where I fancied to be fair) and myself to the right. I had a bit of a shock with the marker rod as I really struggled to hit the bottom anywhere so thick was the weed. Eventually I found a clear’ish spot for one rod and so sprinkled a nice little bed of Rahja Spice around the area and managed to get my lead to hit bottom so I knew I was fishing and not hung up in weed. My other rods were taken up with a presentation I’ve been playing around with for weed fishing and soon I was zipping up behind the mosquito mesh. I love the overgrown swims but the hour before dark can be pretty much unbearable when you get bit as much as I tend to be.

Monday morning and I’m sat looking at bubbles rising over my bed of Rahja’s when suddenly the alarm went into melt down and the tip dragged around on that rod. I was on it in an instant and for the next few minutes my heart was very much in my mouth as I coaxed my victim through weed bed after weed bed, playing my size 8 P.B. super strong would hold as they normally do. 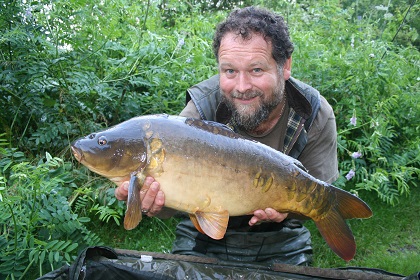 The next generation coming through in the Colne Valley.

It was with huge relief that I netted that ball of weed with carp encased. My first fish from every venue means so much to me. I walked up to Ron to pass on my news and soon we were picturing a young Colne Valley carp.

Back in my swim and re-cast, then an hour later Ron is fetching me for photographic assistance. Job done, we had both caught on our maiden voyage. Ron’s fish had fallen to a Special Crab pop up fished over a fair bed of freebies on a small clay patch he’d found. 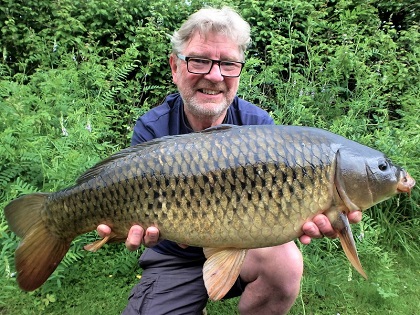 Ron found a spot to catch from too. Special Crab this one tried to eat.

We were obviously right in the middle of a feeding frenzy as within minutes I was playing my second carp, this one was out the edge so I never had the weed issues I’d had with the first fish and was able to keep it out of the weed all the time whilst Ron snapped away with his telephone, capturing a special moment. 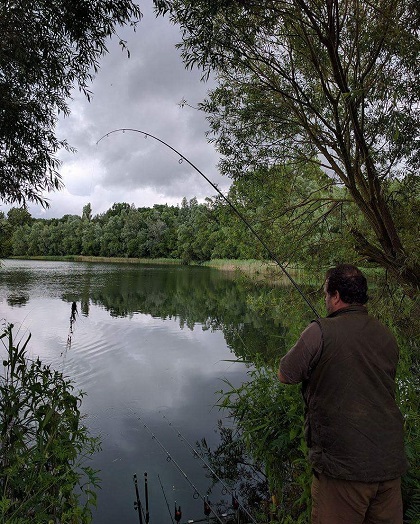 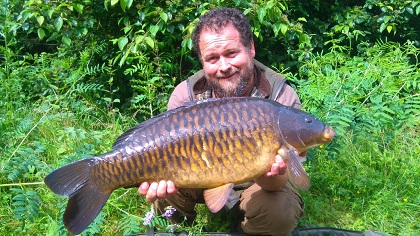 Colne Valley stunner, another I'd like to meet again in the future

Well, we stayed a second night but the fish had moved on and the following morning in horrible hot and calm conditions we both packed and started our long journey north. 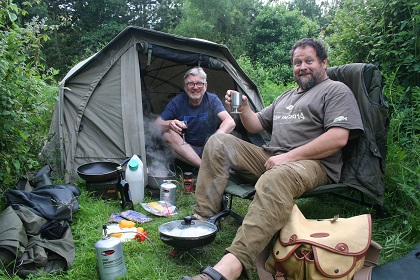 We celebrated our fish in our usual way. i was also still celebrating 100 days off the alcohol by drinking alcohol!

Well, once again another month has passed me by and rewarded me well. Carp from three different waters and some crackers too. It has very much been a Rahja spice month for me both on the lakes and for my river fishing. Why change something that keeps working? 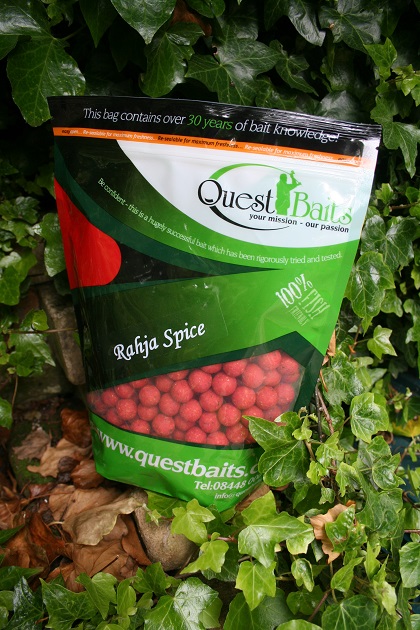 This month has been a Rahja Spice month 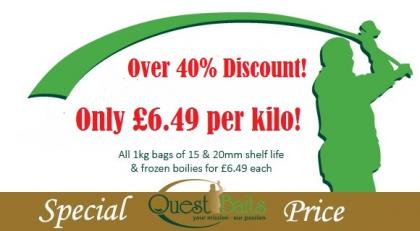 Our new promotional offer on all 15 and 20 mm boilies