Home Blogs Fire and a Bucket in a Bucket! 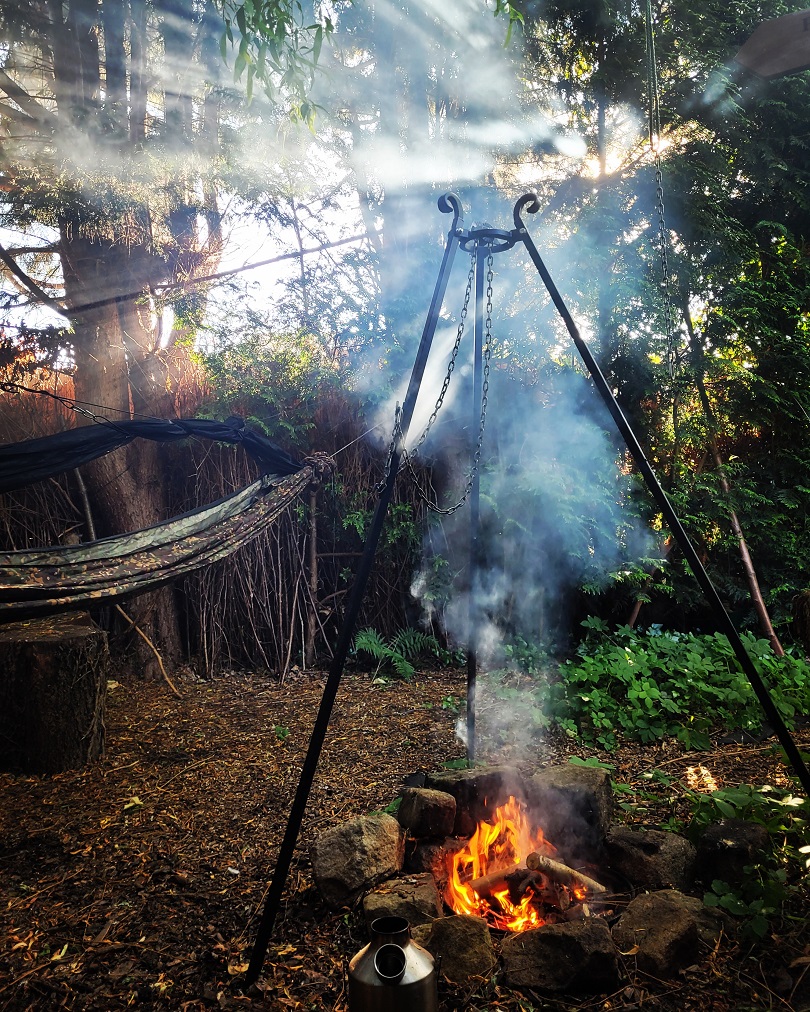 Always wet the area around where you intend to have fire 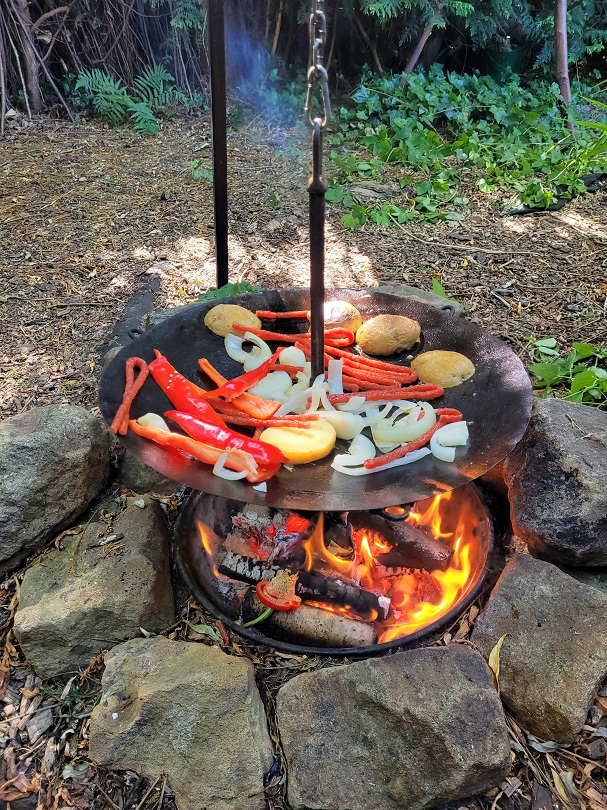 I love to cook over proper flames

My beginnings with cooking over twigs etc came when I decided to try cooking in the base of my Kelly Kettle. I had used the kettle some time, so it was a logical step to move things on further than just boiling water. I brought my first Kelly Kettle as a mosquito repellent as much as a real quick way of boiling water. I’d had an invite on an old historic carp water and the mozzies were a nightmare. My invite had come from Brian Capel and he was a keen Kelly/Ghillie/Storm kettle (I don’t think his was a Kelly but they all look similar and work to the same principal). It was whilst enjoying endless brews that I realised how the mozzies were giving our smoky swim a wide berth. On the back of that, I ordered myself a Kelly ‘Scout’ whilst still on the bank.

Not being sure how one would be accepted on the waters I was fishing; I was extra careful not to leave any burnt traces in the swims. It had wound me up for years people putting hot pans and kettles on the ground leaving unsightly scorch marks. Because of this, I would keep my fire pit off the ground. Initially with stones or dampened branches and very soon after I had a special stand made before Kelly Kettle started to sell their own. 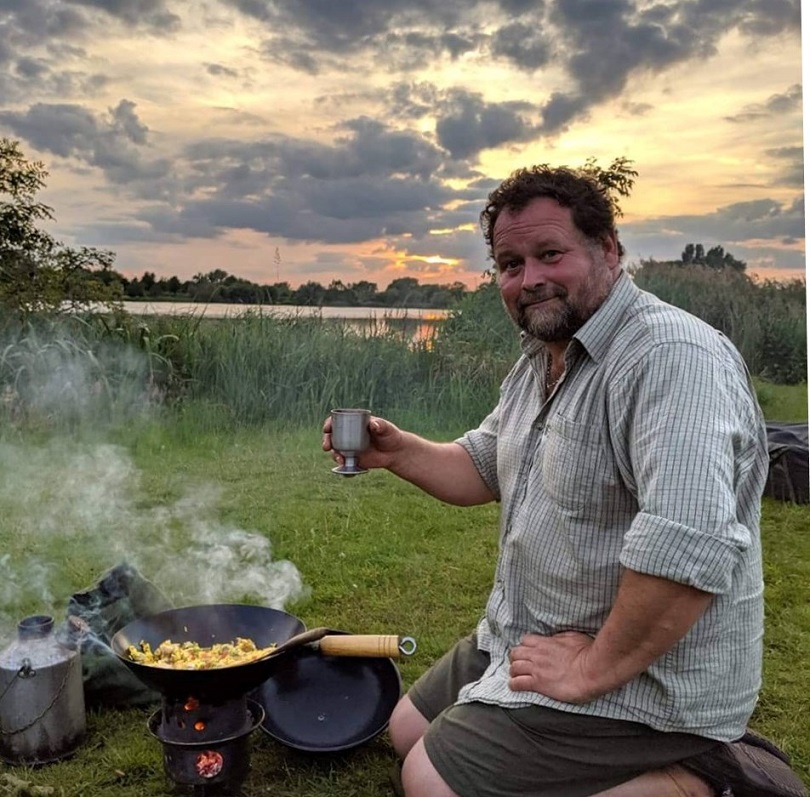 Cooking over the Kelly fire pit. It is on a three pronged stand to keep it off the grass.

To this day I have never been stopped from using my Kelly Kettle, or, more frequently these days, my Bush Box which creates much more flame. This is because I have always been careful in their use. Like I say, I have always been extra careful not to leave scorch marks or risk a fire in the advent of knocking something over. Because I am beside water most of the time this is easier than being anywhere else, which brings me onto my bucket in a bucket theme.

When the ground is dry it is a simple matter to pour a bucket of water over the area you intend to use your stove or barbecue before you start cooking and keep that bucket handy whilst cooking – just in case. I would hazard a guess that a high percentage of outdoor fires are started from those little disposable foil tray barbecues that seem so popular. I see more used direct on the ground than raised off the ground. The heat generated into the ground is intense as can be seen by the many burnt imprints left on the ground. These are all potential fire hazards, particularly when left behind to burn themselves out. 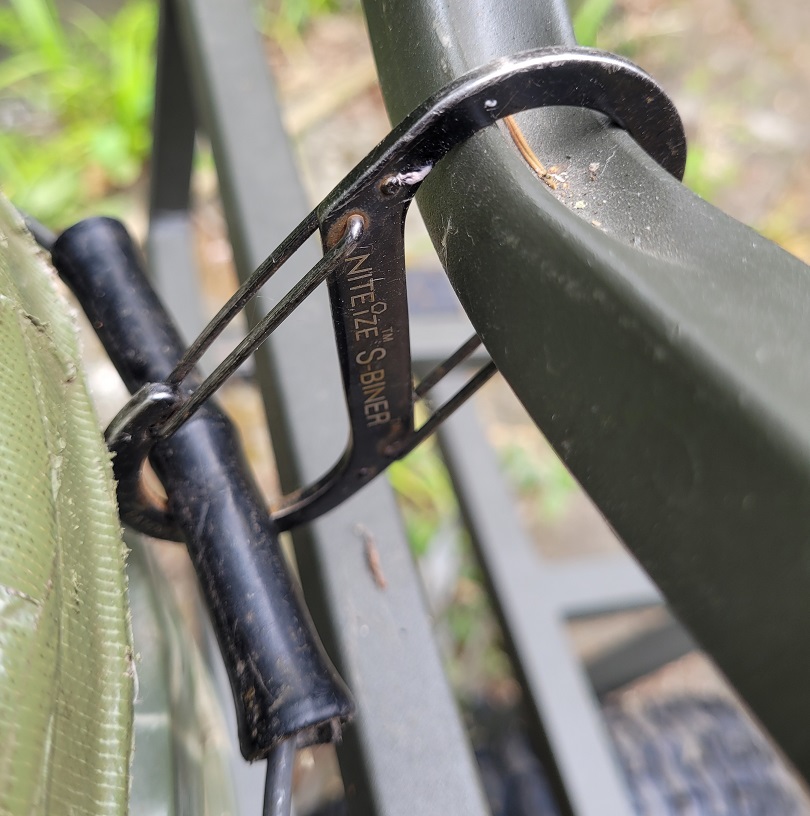 Years ago, to make my barrow feel lighter, I was looking at ways of really exaggerating the weight at the front. The heaviest thing I carry is liquid and it suddenly occurred to me one day that by attaching a large karabiner to the front of my barrow, I could hang a large bucket holding my water bottles and bait etc. The problem was though that it would catch the wheel because of the long drop from its swivel handle. This was soon got around when I realised it would fit/rest inside the buckets I used to supply 5 kilos of bait in and by using the handle of that, the main bucket was raised considerably and suddenly my barrow was easier to push with weight further forward than usual and with plenty of ground and wheel clearance. 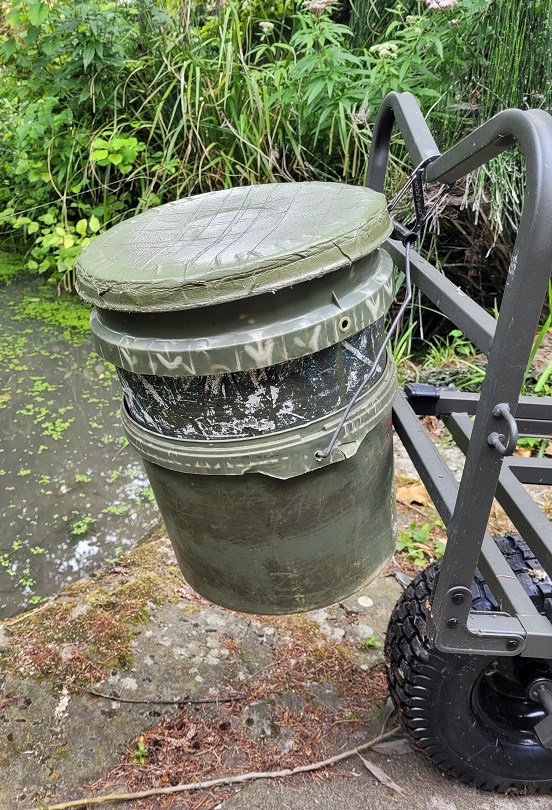 Bucket in a bucket

This led onto other bonuses as it meant I always had a spare bucket for when a fish was on the bank, to, a temporary rubbish dump, but the big bonus was that by turning the smaller bucket upside down and placing the larger bucket on top, I had a perfect height, baiting station to stop having to keep bending for bait when Spombing etc. 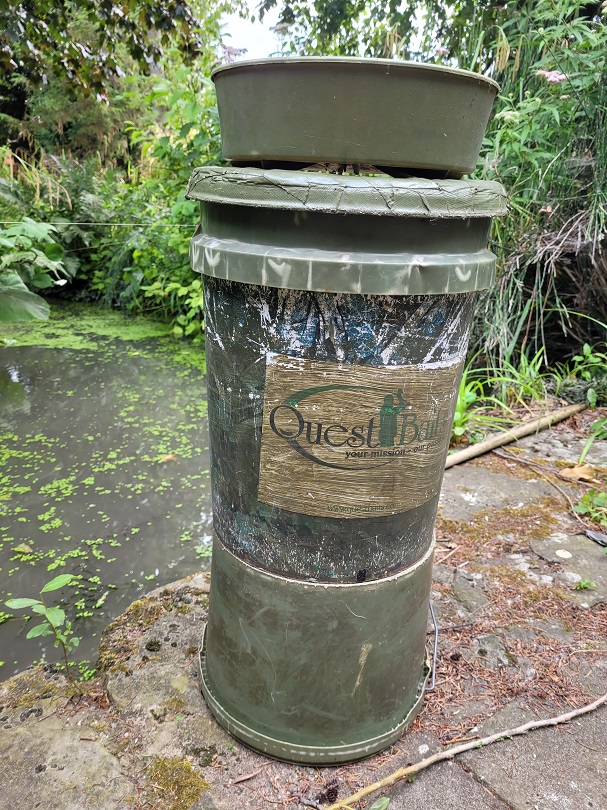 This not only saved time, but also enabled me to get a better rhythm going. That second bucket has been put to so many different uses over the years. I guess I had never realised how handy a spare bucket can be. Plus, my barrow became easier to push. 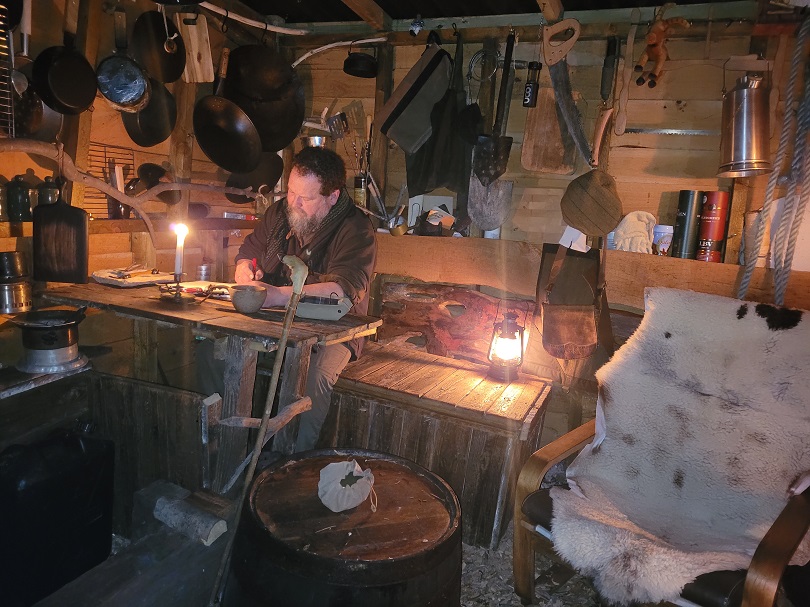 I spend a lot of time here

Back to the fires and the cooking, I have an oak building I call my ‘Dreamers Hideaway’ where I spend quite a bit of time when not angling. It is a great little quiet escape that is lovely to simply sit and chill, read or as is the case at this moment in time – write. Outside I have a fire pit that is used a lot for fires in the colder evenings, or for cooking on. The ground around that is always kept damp with buckets of water. I get some nice comments on social media about my little hideaway, but something I never show is the red bucket sat just out of camera angles all the time. I have thankfully never needed it, but it sits there ready loaded with water. I am only a few paces away from a pool, but looking for a bucket, then filling it, can give an accidental fire just enough time to spread a bit too much. 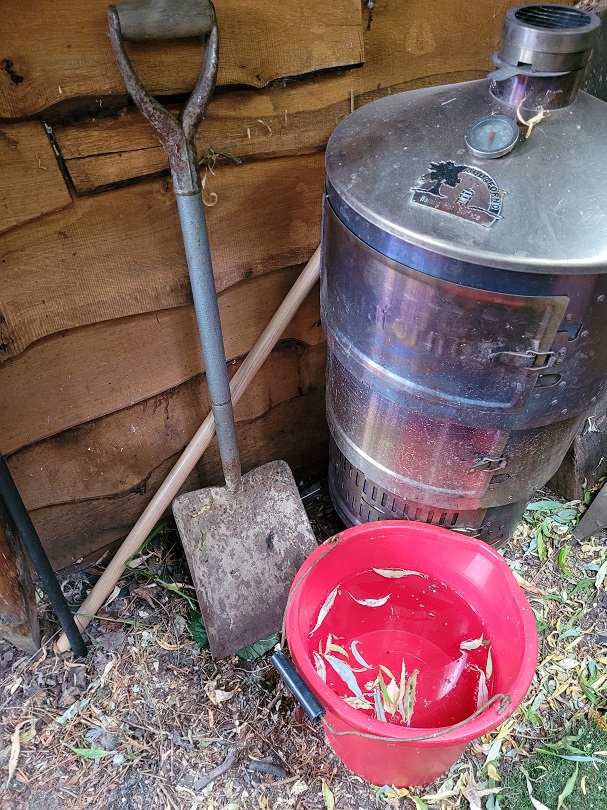 Always emergency water very close. I can refill this again in seconds from a pool within a few paces.

It was awful seeing those houses on fire on the news last night, the wind soon had those flames spreading across multiple houses. Please be careful and think seriously about if you are in any sort of position to act fast if a fire starts. The start of a fire is much easier to deal with than one that has picked up momentum whilst you are thinking of what to do.

I have seen several bivvies go up over the years. So many things can suddenly go wrong. A friend had a pipe split between his stove and gas canister. It surged fire everywhere and a lot of his kit was ruined in seconds. I had a connector I had brought from EBay with crocodile clips to connect to a small battery to recharge my phone simply melt and catch fire. Fortunately, I was in my bivvy with it and was aware quick enough to drag it out of harm’s way before much damage was done. Had I been next door having a cuppa…

Another fire hazard and something anglers have used for years, especially wintertime, is the small T-Light candles. I have had several simply ignite totally and you can’t easily put them out. The first time it happened with me was when using one in a UCO type lamp. I guess it simply got too hot behind the lens and simply burst into flames. Again, it was lucky I was there but did burn my hand trying to get it out the bivvy. This has happened more than once with me, and I will no longer use them in the close confines of a highly flammable bivvy. If you have never seen a bivvy go up, you will be shocked how quickly they melt and drip when you do. 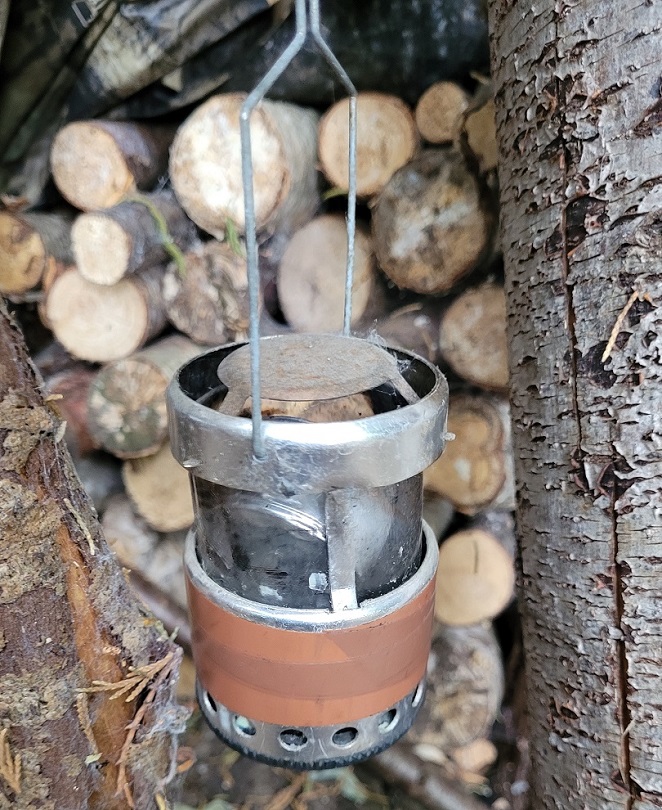 The other time I have had T Lights go up is when I have put more than one together. They simply get too hot and the cheap supermarket ones simply burst into flame, so that all the wax is on fire.

We are all at risk from fire. Please start to expect a fire, rather than think it has never happened, so never will.

Keep as safe as you can.