Home Blogs I'd rather forget July 2020 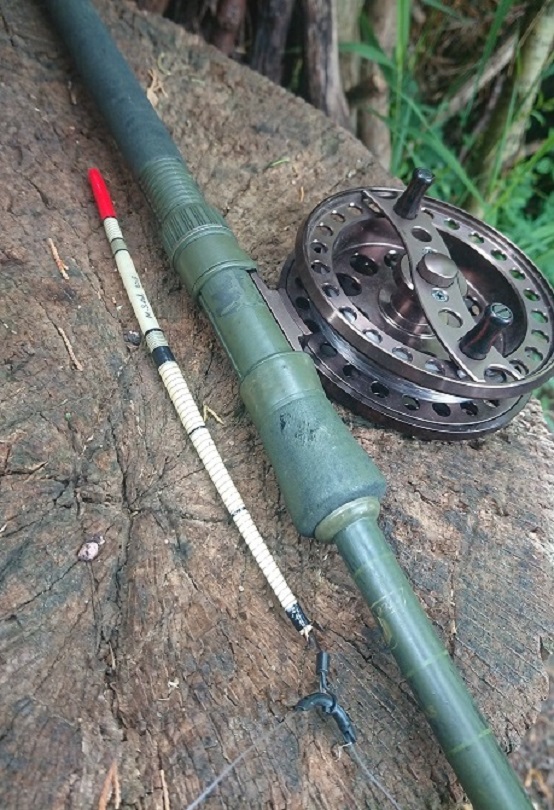 I ended the previous month on a high 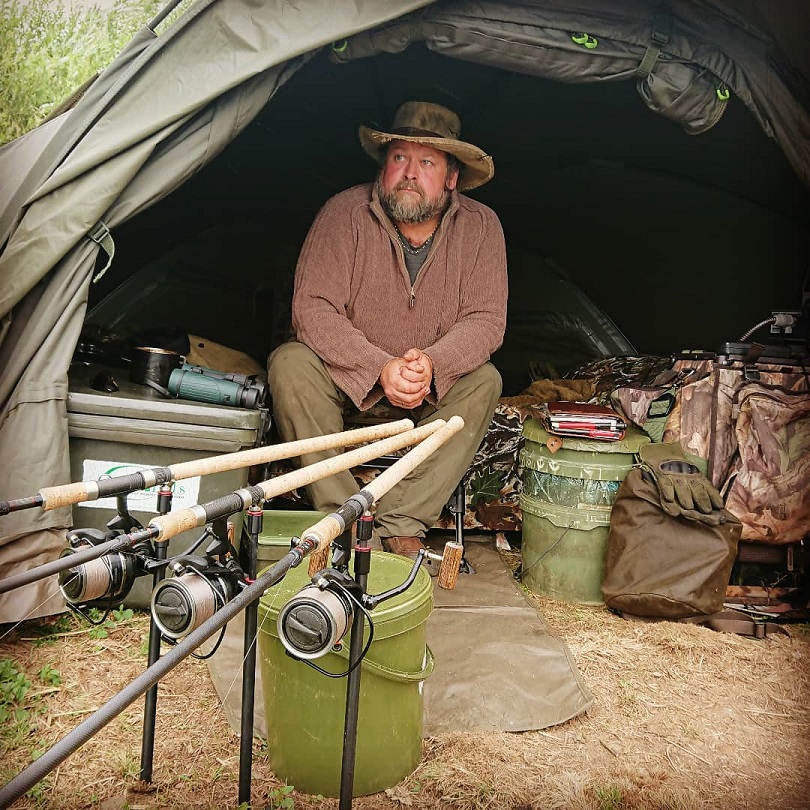 First trip back out on the bank I found myself a few hundred yards away from where I had stalked the Coelacanth looking carp (ancient with two dorsal fins) and angling in a totally different manner behind 3 idle rods awaiting a carp to make a mistake. 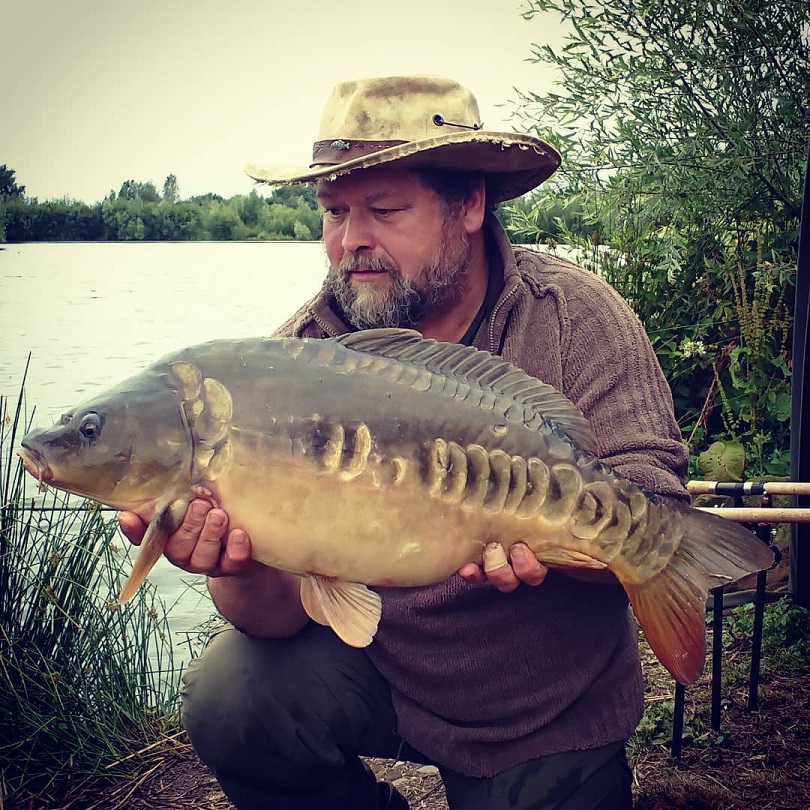 A mirror slipped up first

A mirror slipped up at first light and 9 am the next morning just as I was lighting the Bush Box for a brew, the same ECU alarm screamed for attention and a fast moving carp was on. Out in the pit the water bulged as the fish tore along the top of a shallow bar. It did all the usual things a furious male tends to do when hooked and my first glimpse of it as it charged by in the crystal clear water had me instantly recognising it as the ridiculously long common I had stalked the previous week with a lump of Spicy Spirulina paste. This time the Rahja Spice had tempted it and a pop up at that. It is incredibly rare for me to use a pop-up. 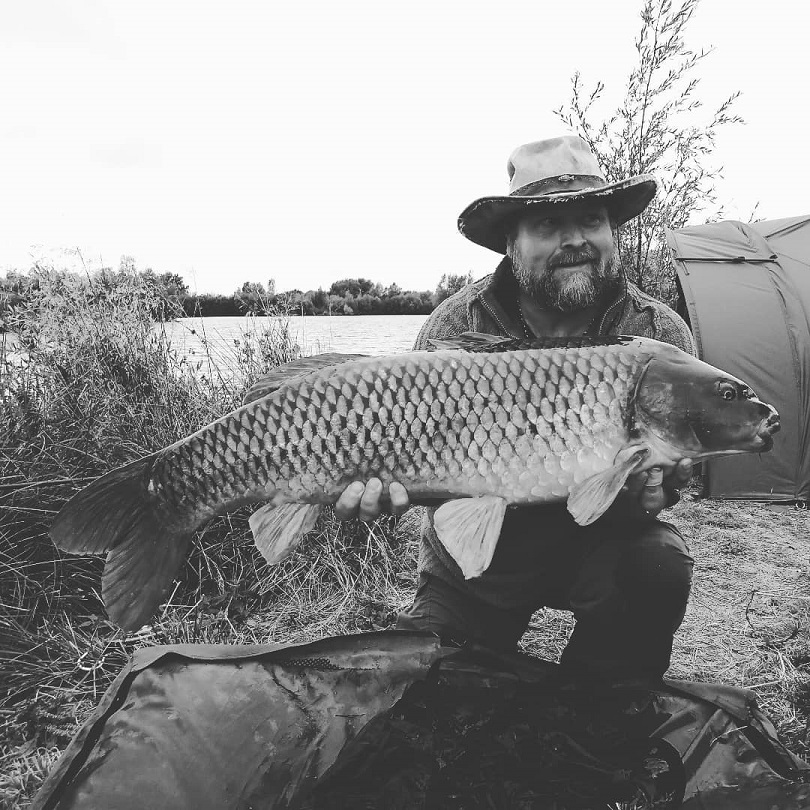 I was there for my usual 2 night week-end session and the second night produced a third fish for me so a pleasing start to the month on a pit that had been a little moody over the previous weeks. 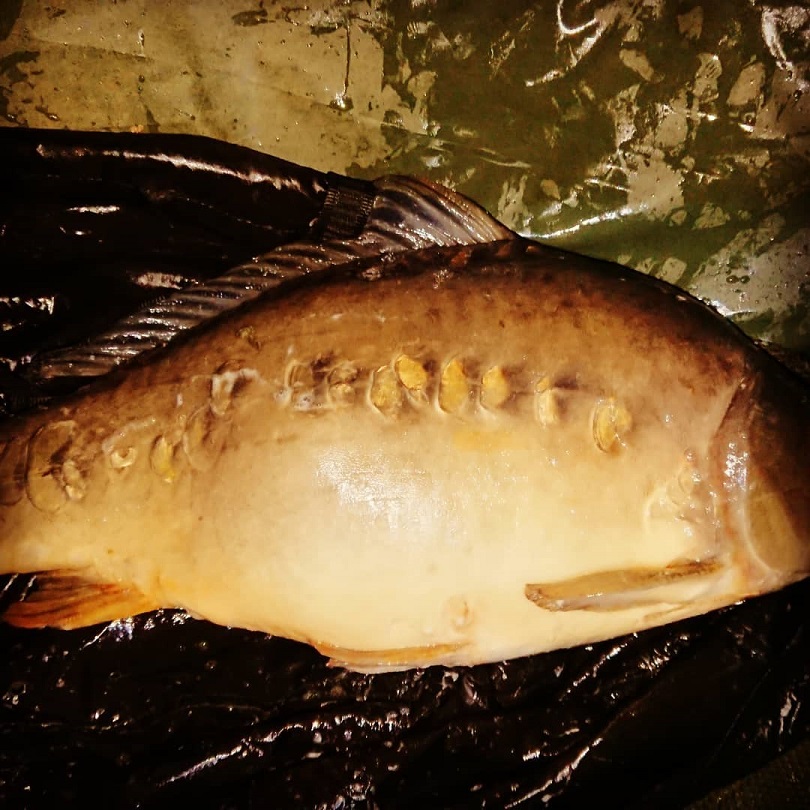 Headless and tailless on the second night

Through the week my lower back still gave me gip and I even ordered myself a posh new office chair hoping that would help me. So life was a little miserable stuck in my office away from the world I prefer to live in and trying to fit in my quarterly tax returns as well.

It was a strain motivating myself to get loaded for the following weekend, but I work on the principal that I would rather be away in nice surroundings than suffering in the same enclosed walls I know so well.

Eventually I was set up in a convenient swim that hadn’t required much humping of gear. It was then I realised I had something a little more serious than back ache. I had tried to pass water and had a total blockage.

Straight away I thought kidney stones and it dawned on me that my back pain had been in the kidney sort of area. Eventually I was able to pass a bit of water but very painful when I did and to be honest, it looked like best bitter – not good at all.

That first evening not long after starting I hooked a really big feeling fish, a proper chunk that plodded around where it wanted before the hook hold slipped and we parted. I was real gutted about that one as I have fished the place hard for one of its larger residents that I have seen but no-one has banked. It was to be my only action of the trip. 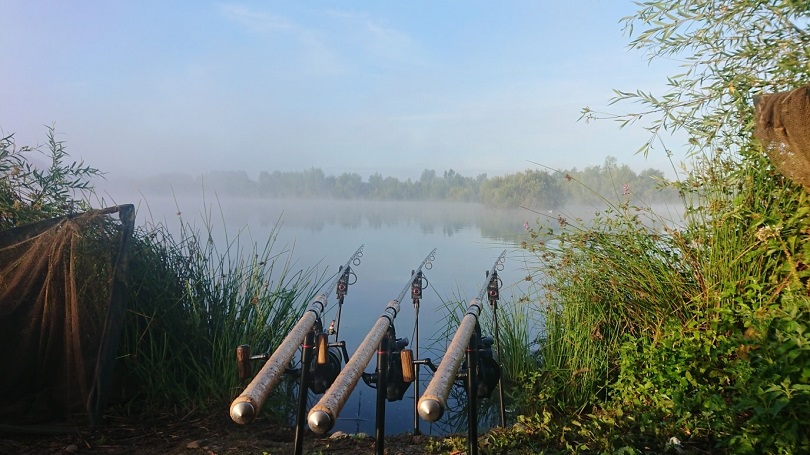 I spent most of my week-end sleeping.

I spent the Friday night until Sunday afternoon basically sleeping a lot and generally suffering. I was in a bad way by the time I left Sunday, but thankfully had managed to get myself home safely. I crashed out as soon as I sat down and was then in and out of consciousness for the next 36 hours. Whilst awake I felt totally drunk and it seemed every joint in my body hurt. It was a massive effort to do anything at all. On top of that I was ringing wet through, I guess the liquid inside me had been forced out through my pores with the problems with the usual route.

It wasn’t until Tuesday that I actually managed to motivate to pick the phone up to the doctors and the following day I was told I had a water infection as well as the obvious stone. This was really worrying for me as my father had a water infection that moved straight to and affected his brain. I knew I was not totally with it, but fortunately that side of things cleared from my head in a short time although 3 weeks on I’m still very tired.

Anyway, this is supposed to be an angling blog, not a sympathy reaching out medical post, but this really did see me off for the month. Two weekends I forced myself onto the bank craving fresh air and a different scenery, but to be fair I cast out and basically slept for the most part, at least I did sleep well in the fresh air. I never caught anything and never really deserved to. I was very much playing at it. I could see where fish were and couldn’t be bothered, or more to the point wasn’t up to packing and moving.

Now during this time my parents who are both in their 80’s have been moving house after living in their previous one for 60 years. The stairs were getting a little too much for my father, so now they have a lovely bungalow that has been totally refitted for them. In fact as I write this, they have just spent their first night in their new home. I took a lovely walk this morning before work to go and see how they had got on. Just a 30 minute walk through a nice rural landscape taking in fields and a canal. Although their previous house was only 3 mile away, it wasn’t a quick 3 mile and walk wise was pavement stomping which I dislike. They appear really happy with their move and it is certainly nice being able to have a pleasant stroll to go and see them without needing to fire the Land Rover up. 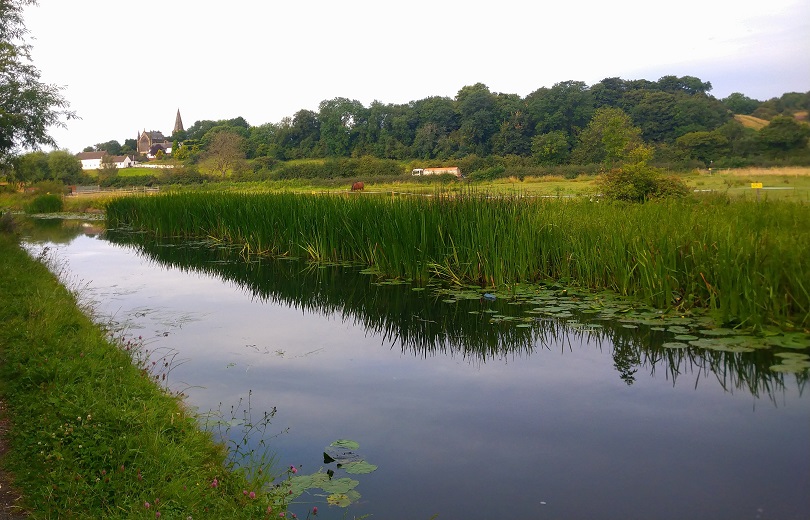 So, with my personal health issues, plus an attic and shed with 60 years of collected ‘might need one day’ items to try and reduce and move, along with everything else in my parent’s house, I am taking it as the perfect excuse for the fact that I have not caught much this last month. Thank goodness my sister and brother in law gave life to my nephews. There is no way I could have done what they have done whilst feeling how I did.

I’ve still got the stone issue but feel much better in myself than I did at the start of the month. I guess I’ve learned to live with it for now. Once the current pandemic looks much clearer I might finally be convinced that I actually have to go to hospital.