During my last blog I explained that due to the current lock down situation I had been unable to fish. I had drawn a 5-mile circle from my home, a distance I felt was justifiable to drive beings I have only been driving 1 to 2 miles a week to do my food shop once a week these past 2 months. Lots are driving many more miles each day for work or whatever, but I have been able to work from home so have done to minimise any risk. 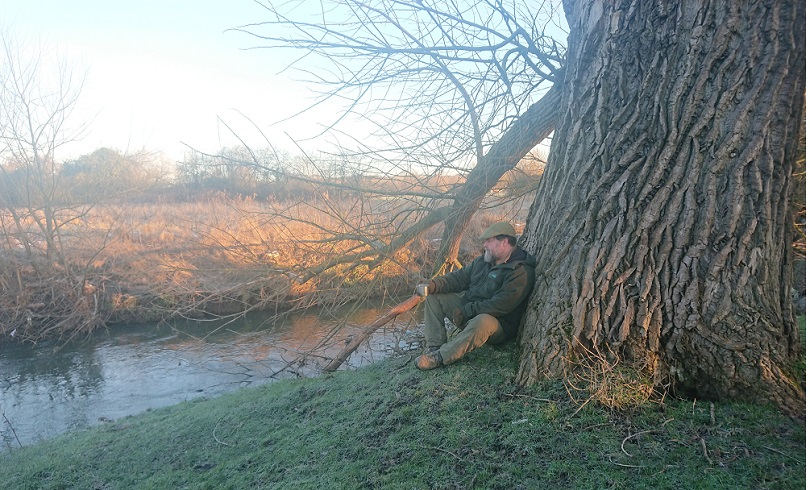 I have sat down the river a few times for an outdoor brew, but haven't taken the tackle

To be fair I have had options to fish. I have a river within casting range of my home. There is nothing large in it and the fish population was extremely low and now even lower still after the otter and cormorant scenario. I do sometimes pop down as the low stock is a challenge, but with the bitterly cold weather and the way it has been flooded, it just never inspired me to struggle even more than normal for relatively small fish. I enjoy fishing it, but I do pick the times when I feel I have a realistic chance of a bite. 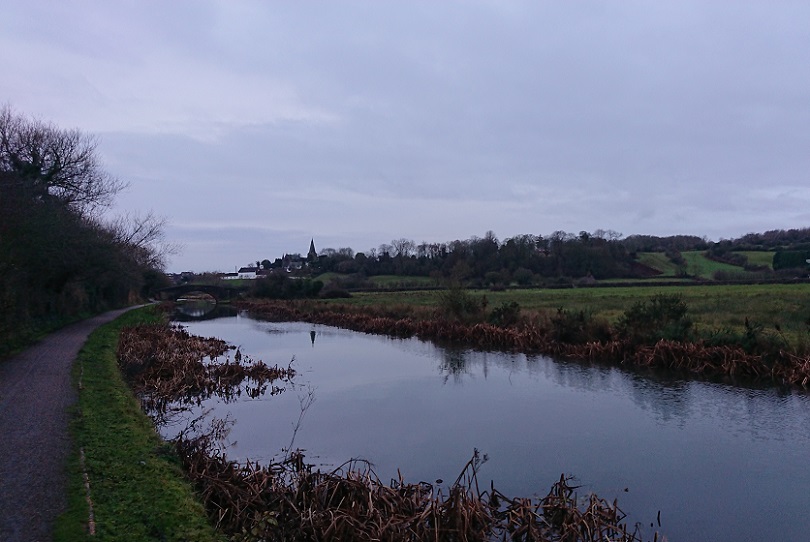 Just out of casting range of home

I also have a canal just out of casting range of my home but sitting on a footpath inches away from potential Covid carriers walking by just was not an option. It’s my duty with both parents in their 80’s to try best to keep myself healthy. They live a couple of miles away so naturally I am in their ‘bubble’ should they need me around there.

The still waters, well, there are only really a couple that I can fish that hold any interest to me these days. My main local venue has been closed all through lock down or else I would most definitely have been doing days there. The ones I could have fished just didn’t appeal either due to lack of previous winter form (I know my local waters well) or too much weed which I avoid during the winter months. 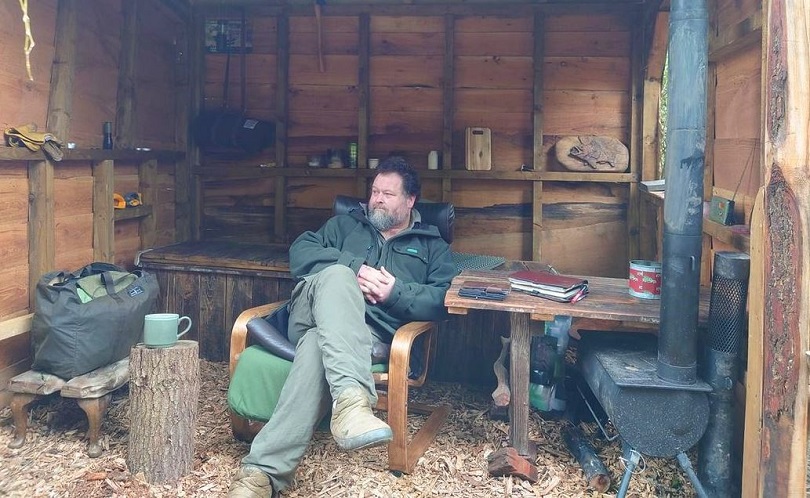 Idling in my 'Dreamers Hideaway'.

So, the last day in February I was sat in my ‘Dreamers Hideaway’ reading with the background sound of birds and a gentle breeze on my face. Eventually the sun cut through the thick canopy of trees and the warmth of it was surprising. I put down my book and closed my eyes and let my mind wander. I knew the carp would be near the surface or on the shallows at a couple of the venues.

After daydreaming for a while, I loaded the Bush Box with twigs, prepared some larger bits of wood and started to cook a mid-day dinner. Outdoor cooking as anyone who follows me will know is another passion of mine, one that I can combine with my

angling, so at least I have not had every pleasure denied during this lockdown.

Whilst cooking and eating my dinner I could not stop thinking about the carp and after a wander around my pool in the garden and seeing just how churned up it had become with my fish rooting for food in the silty bed, I realised I simply had to get out.

After 2 months off I should have been well prepared but I wasn’t. I had not touched my gear since the Xmas break. I went rummaging, grabbed a couple of 10 ft rods and chucked the essentials in a rucksack, strapping a mat to the outside as I intended to keep walking with the gear until I spotted a chance. It seemed to take forever sorting out just the essentials but eventually I was done and on my way to the water which had been playing havoc in my head.

I was delighted to find no-one fishing. First lap I saw nothing but scattered a little bait in different spots I could observe. This was mostly the soon to be released Rock Pool Rahja and a few Spicy Spirulina’s. Second lap I went much more slowly, spending much more time staring at the spots I had prepped. I was beginning to think I’d had too much of a case of wishful thinking and that a third lap would be in order when I spotted some fizzing on one of my small beds of bait. I froze to the spot and lowered myself down trying to be as inconspicuous as possible. Was it a fish or was it gas bubbles?

From my crouched position I saw more fizzing and lining it up with a far bank marker, I stared hard at that spot. The next two bits of bubbling came to the left of the patch I lined up and a few seconds later more so to the left. I was convinced it was fish and not gas bubbles. I just hoped they were carp. I carefully backed off and started to prepare the rods.

First one in was a 15 mm Magnum Maple where the free bait had been put in. Although I had not fed the Magnum Maple, I have always liked fishing a totally different hook bait among bait. My other rod I put a Rock Pool Rahja on, the same as I had fed but put that more to the left off the bait as that was the direction the bubbling had been going.

At last I was fishing and not only did it feel good, it was also incredibly exciting knowing

I was just feet away from a potential carp. I was absolutely brimming with confidence but around 45 minutes later this had started to wane thinking I had spooked them and cursing myself for putting 2 lines in when one rod should have been enough. I should listen to my own advice more. I put it down to 2 months away.

A definite carp then showed but 15 metre or so away from the rigs and where the bait had been. I had not put any bait in relying on some of what I had put in on my first lap still being there. Perhaps I was just fishing single hook baits. My mind told me to ether wind one in, put the smallest lead on I have and risk a cast to where the carp had just showed, or just leave the rigs in place and lightly bait over them. I opted for the second option and to lessen the disturbance I split my 15 mm baits in halves and quarters.

I introduced some quarters first just 3 bits of bait at a time with a mini catapult, then followed it up with some half baits. Five minutes later I could hardly contain myself, the fizzing was back over my hook baits. It’s amazing when fishing so close, eyeball to eyeball (well it would have been had I stood up and spooked it or them) when you suddenly need to scratch an itch when really you know you need to remain totally still. Then whack! The plastic indicator slammed into the rod butt, the rod curved in the rests, the water erupted, and I was into a carp. I can not tell you how good that felt after the longest lay off from angling I have had in over 40 years.

Playing fish becomes an instinct but this one the nerves really kicked in. I so desperately wanted to land this one. An eruption on the surface out in the lake and the heavy head shaking told me if was one of the larger residents. I guess the big bow wave as it charged along just below the surface was a bit of a giveaway as well. Eventually at the net I missed it!

Yes, no writers licence here, I totally messed the netting up. It was in, but I pilled it too far and it waddled over the arm near the spreader block. I couldn’t believe it and all I could tell myself was...

Fortunately the Gods of Sir Izaak smiled on me after teasing me and my prize was landed safely on my second attempt.
I took time to compose myself and let the fish get its breath back then gathered the unhooking and photography gear together. The width of its back told me I possibly had the largest fish I knew of in the lake sat in my net. What a welcome back.

With everything ready, for it I lifted the old warrior from the water, laid it on the mat and said out loud to no-one. “I don’t know you”. It looked as big as the largest resident but a fish I simply did not recognise at all. It had a real distinctive flat face that I would not have forgotten. 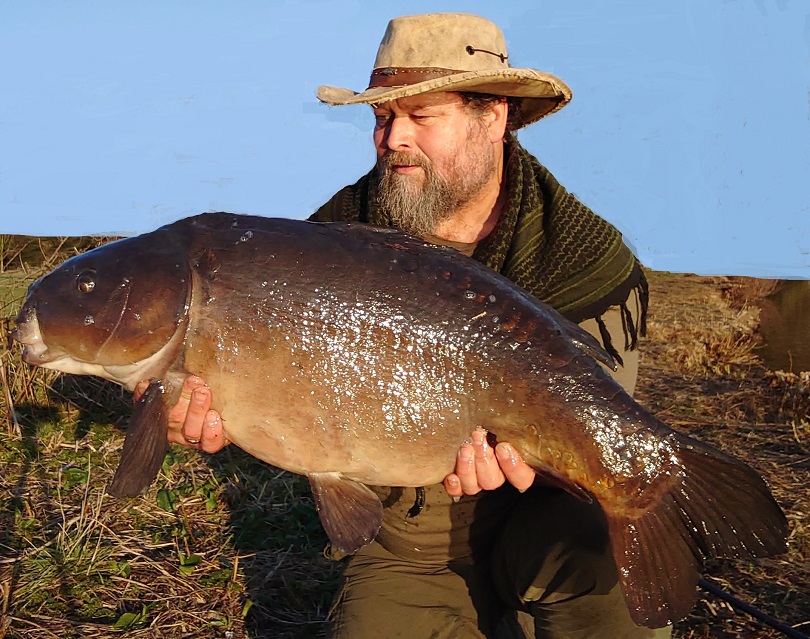 With the formalities done, the fish powered off probably disgusted for making a mistake. With that I simply say back in my chair with no rods cast out as I’d wound the other in before I did the pictures of my capture as there are a fair few snag’s in the lake and I didn’t want the risk of another going whilst I had a fish on the bank on my own. A silly grin was stretched across my face. Just a few hours earlier, I’d had no intention of fishing anywhere at all, yet here I now was after meeting a very special fish for the first time.

Oh yes, before you ask, the bait that tempted the mistake was the alternative hook bait, the Magnum Maple over Rock Pool Rahja, I had not put any of the Spicy Spirulina in on my second baiting as I just wanted visual baits on top of the weed and silt.