I know that I have been rather quiet of late, but I reached the point in life where some things had to take priority over other things.

Dad’s health had deteriorated quite rapid over these past 12 months and this past winter my mind has not really been on my normal course of life at all. Yes, I escaped and fished and up until the start of this year, my winter was going well. But, with dad struggling, my mind really wasn’t tuned in to the extent I like it to be. I found myself very much going through the motions rather than turning up with an evolving plan. To be fair, I was always expecting a phone call for my assistance. 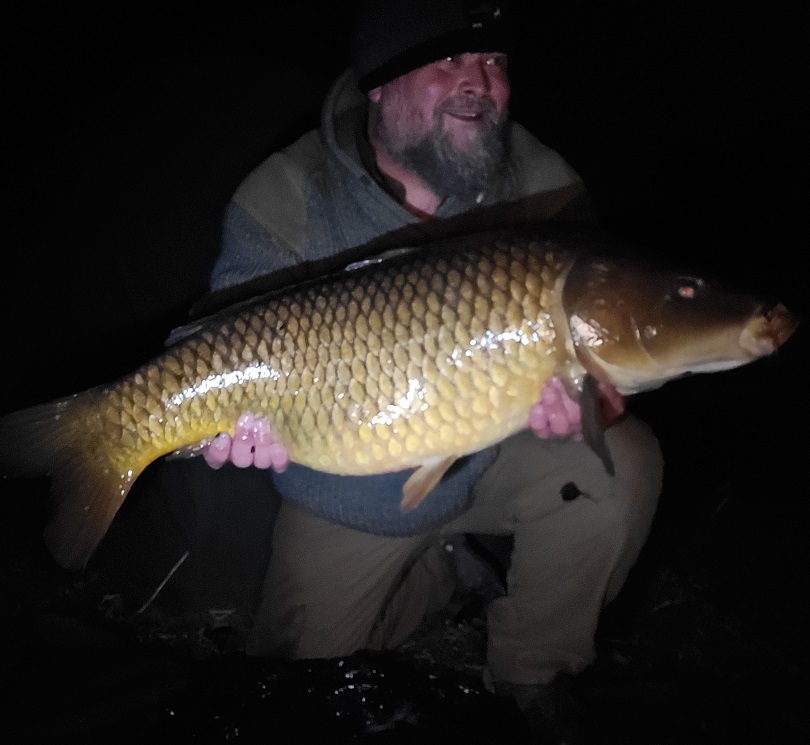 I seemed to just be going through the motions this past winter.

Sadly, a couple of day before my birthday, dad lost his strength to keep fighting and passed away in hospital. Although expected, it still hit me like a brick, but at the same time, it felt like a pressure valve had started to release. The family gathered supporting each other for the night and day before I returned to my office. I was unable to concentrate at all. I was alone, it was my birthday the next day so I did exactly what Dad would have wanted me to do. I shut my office after diverting the bait and the holiday phones to my mobiles, chucked my gear in my Land Rover and went fishing.

My mind really was a blur, I wasn’t ready for office life just yet and to be fair, I have always tried to fish on my birthday. I stopped at the supermarket on the way for food and decided upon cooking a surf and turf, so with steak, raw prawns and so on in the trolley and some cereal for breakfast, I was on my way.

I felt so much better alone outdoors than I had in my office. I always do, but the difference this time seemed massive. Finally, I had time to sit and reflect about what had happened. Deep in my personal thoughts I had my moments that I am not ashamed to admit to. Dad had been such a great role model, totally dedicated to my mum, my sister and myself. A totally calm and chilled out character, of which I like to think I carry his genes on, through me. He never asked for anything but was always there for everyone.

Dad had the last laugh; I am sure he was there with me whilst I cooked the surf and turf and sat down to eat it. I was really looking forward to it and had only taken a couple of mouthfuls, when one of my Shaun the Sheep indicators hit the ECU alarm. The fight went on forever, as they always do when you have warm food needing eating. I remember smiling to myself, thanking dad for ‘having a word’ and imagined his mischievous smile, knowing my meal was going cold.

“Thanks dad”. It was a perfect birthday present.

A couple of days later I was back and amazingly, I managed to get back into the same swim as I’d fished on my birthday. So, repeating my tactics with a Magnum White hook bait and a mixed bait stringer, I was away, shortly after settling in and a lovely common, found itself being added to my photo album. 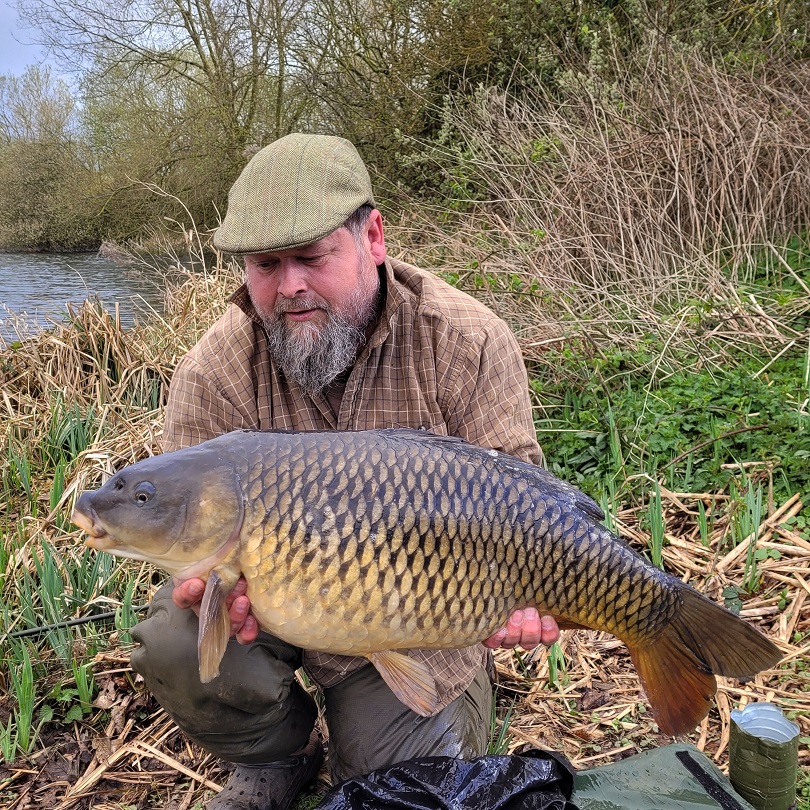 I was back a couple of days later

I had found myself making these past two trips out of habit. I had felt unable to travel anywhere other than my immediate locality before my fathers passing, because of putting myself on call, should I be needed for him. Now I was a little freer to start to fish some of my other quieter venues I like to spend time at. Venues which require a little longer in the motor to reach, venues I had felt wrong thinking of going to whilst dad was at his worst.

So, next trip I was off to Paradise Pit, a gorgeous gravel pit off of the beaten path and one of the few that has enough suitable trees to make sure I had my hammock and tarp with me. I have used a hammock a lot over the years on the venues that are suited to them, I love sleeping in them and love even more the minimalist amount of weight and bulk you carry, instead of the bedchair and bivvy. My previous hammock, I’d had for 20 years, so thought it time to ask my parents for a new one for my birthday. It ended up being the last item my dads debit card brought. Naturally, I was keen to christen the new one. 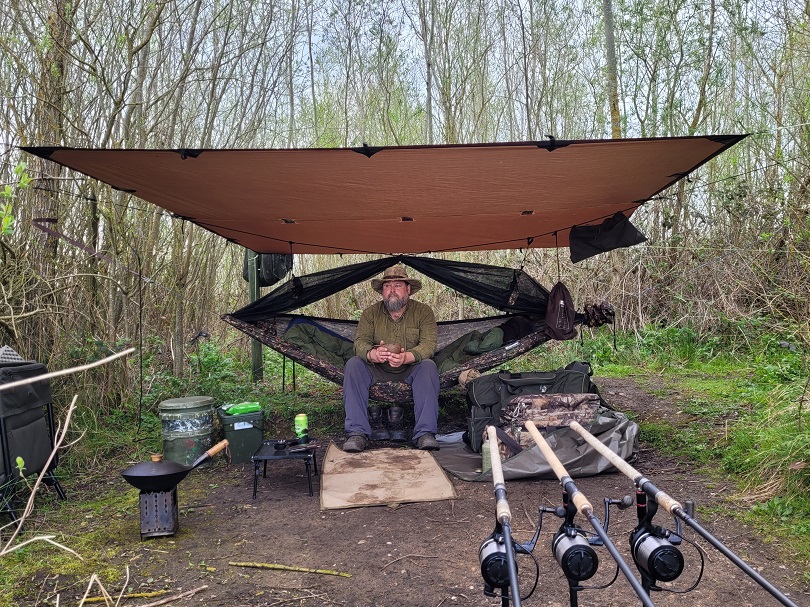 First trip for the latest hammock

Two great nights sleep and two great carp fell to my rods on my welcome back to the Paradise Pit. Dad sure did seem to be having a few words in a few ears. The first fish, a beautiful zip linear was a classic capture. I’d introduced a catapulted bed of Magnum White with a few Rock Pool Rahja’s for good effect into a silty gulley and around 9 am noticed some bubbling start over the bait. Naturally, my eyes were drawn to this as I sat motionless with a smug feeling rising inside. The water is very clear and with me fishing quite close the atmosphere was electric, particularly when a good fish rolled at the very spot I was staring at. More bubbles came up as it sunk its snout back in the silt and then everything tightened, the water bulged, and I was doing battle. It felt so good to be back. 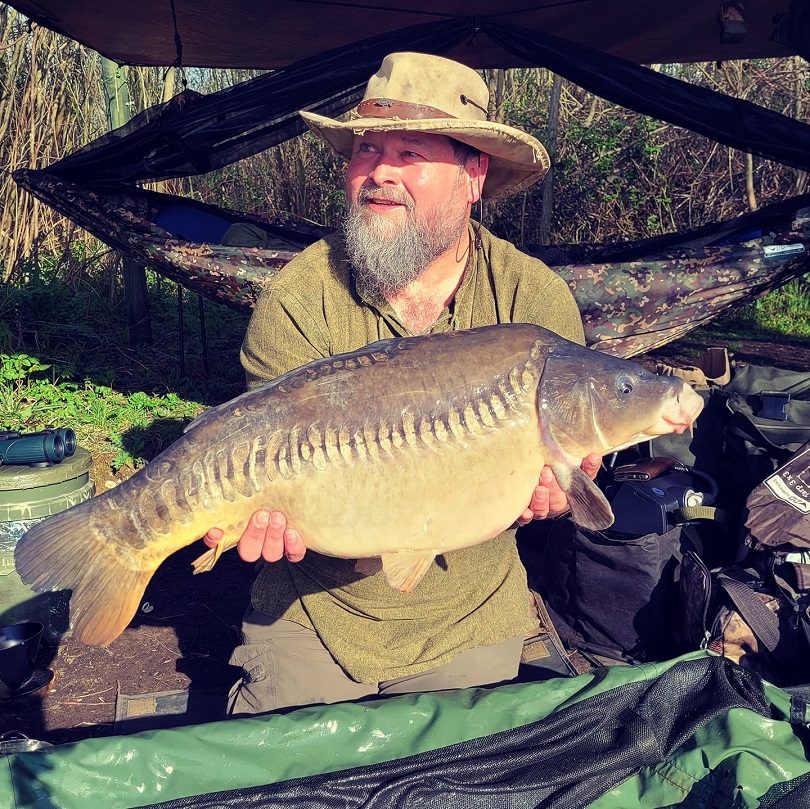 It felt so good to be back

The following day at a similar time, a rod cast to a totally different part of the swim, on a Rock Pool Rahja with a simple Rock Pool Rahja stringer was more than the next carp could resist. What a carp that turned out to be. Happy Easter Shaun. 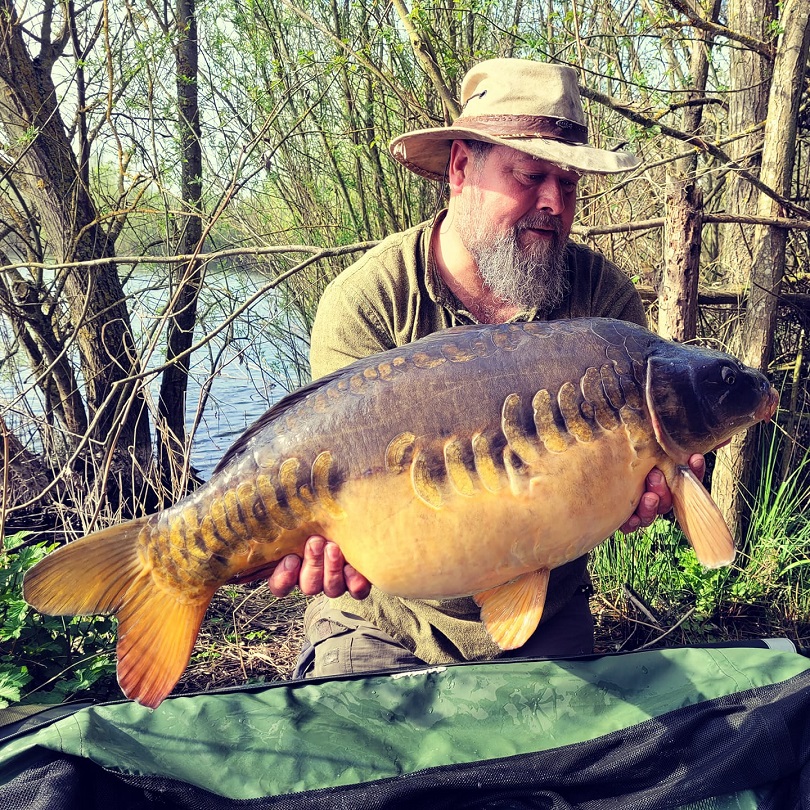 What a carp that turned out to be

The following week I was needed for work party duties at another venue. The Country Retreat. The work party was Sunday, so it made sense to me to me to fish Friday and Saturday night there. I really wanted to be back at the Paradise Pit after the welcome back the previous week but going to the Country Retreat would mean I could spoil myself with two, rather than the one single night.

I was amazed to find myself to be the only one there when I arrived and the swim, I fancied spending a couple of nights in meant I could use the hammock again, rather than my bedchair.

Well, what can I say? A wide baiting of Rock Pool Rahja, with the same cast among it, was just the approach I needed to land myself a new lake record common. Happy days indeed! 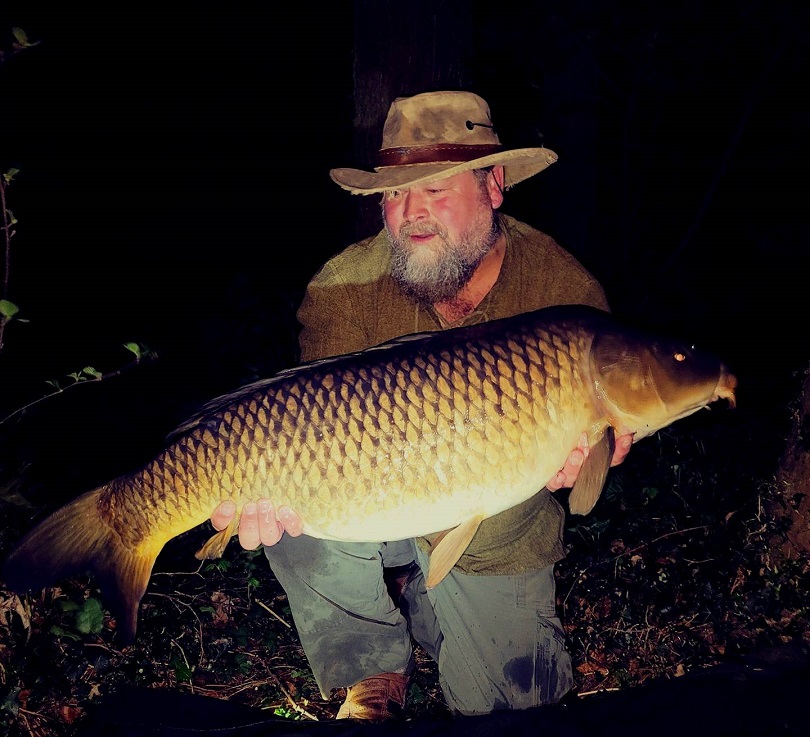 The following morning, Rob, one of the other members had turned up and was chatting away when my ECU sang its sweet song yet again.  Would you believe the largest known mirror in the lake was on the end, 12 hours after the largest common? 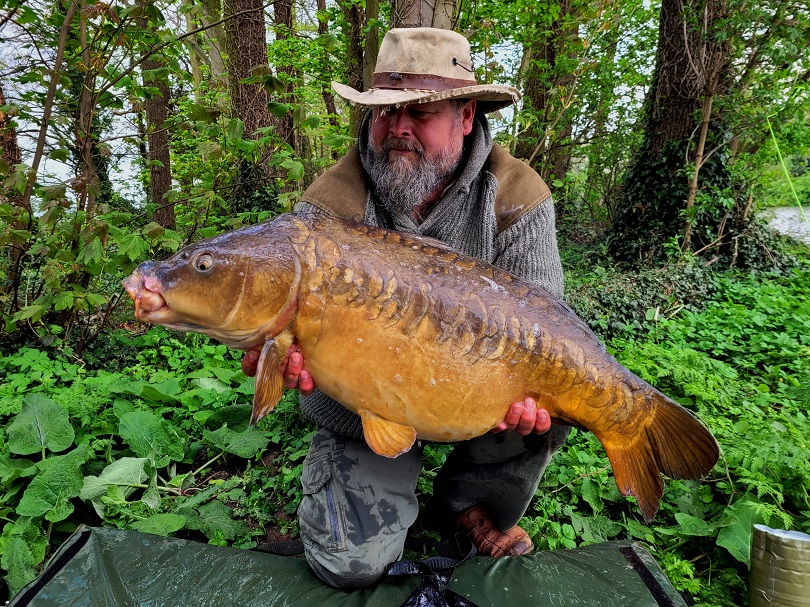 12 hours later and the big mirror

I’m either a very lucky angler or dad was really making it known to me he was still doing what he could for me.

Saturday afternoon, my good friend Fennel turned up and slotted in next door. It was so good to catch up with him, but it really was bitterly cold. It didn’t stop us creating a feast between us though and the 19 Crimes wine we were celebrating my captures with, had to be warmed.

So, April had seen me in very mixed emotions for obvious reasons if you have read through.

Life moves on, I am still fortunate to have a wonderful mother who is in her 80’s, fortunately still very active in both mind and body.

Thanks dad and rest in the paradise you so much deserve. 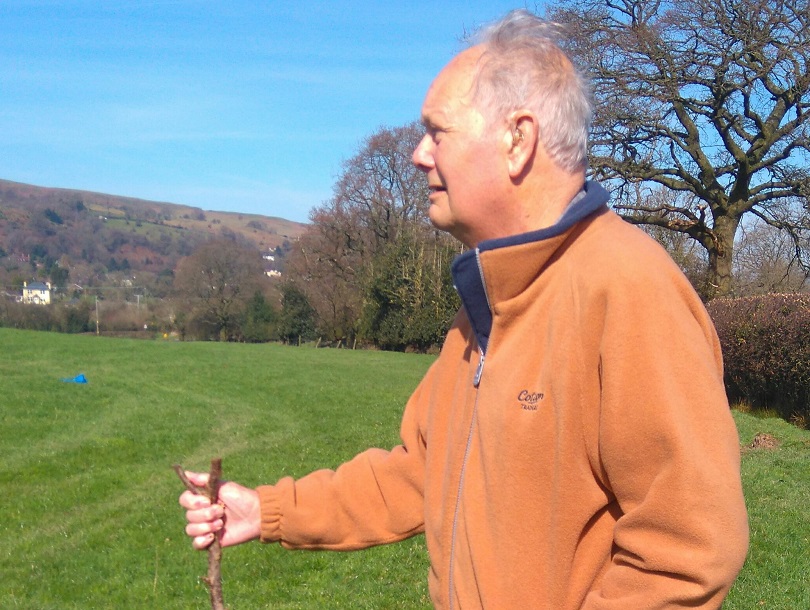 In calmness and loyalty, your genes live on in me. Love you dad, from a proud son.