Home Blogs The fish were on naturals (and avoiding the bird life).

“It’s fishing hard, I went at the week-end and everyone was blanking”. James said apologetically.

We’d had to shuffle this date around the diaries a couple of times already, so I replied with my usual…

“Don’t worry about it, we’ll sort them. I don’t want to be up all night catching fish anyway”.

I’ve known James for years, right back from him being a customer at the shop. We had only fished a couple of times together though, after he had wanted to pick my brains and swat up on a couple of aspects of carping. This one was meant to be a more chilled out affair though and the promise of being cooked for and looked after on the bank was something I could not resist, it would be a novelty for me as I’m usually the one doing all the cooking. In hindsight I’m glad I took my own brewing gear too as I think James must have some sort of tachograph on his which prevents it being used too often.

Anyway, with poor angling on the cards and Storm Hector starting to brew we met up and I followed his new carp mobile for the last couple of miles to the lake through beautiful countryside. Just the sort of setting I like. The lake was rather pleasing to the eye with a castle, seemingly in the sky.

For a couple of weeks the wind had been stuck blowing mostly from the north and easterly directions but finally Storm Hector was going to blow the whole lot back the other way and I said to James, regardless of what we might spot, we need to get on the end of this totally new wind. He never argued so we were setting up sooner than I normally would have done on a new (for me) venue. 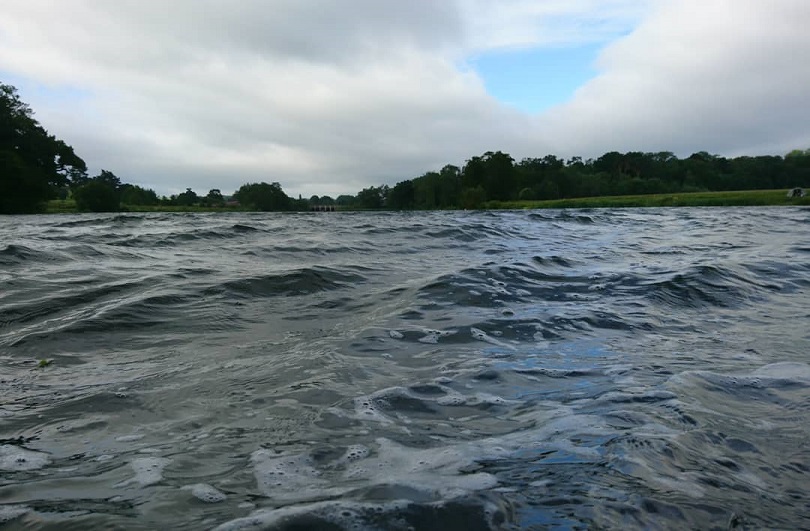 I set up with my rods going to the left and James to the right. I remember commenting to James that the birds were seemingly sat their waiting for bait and sadly I was not wrong. All through Wednesday I was getting plagued by coots, mallards and swans eating everything I introduced. As has been the case for a while now this was a mix of Rahja Spice, Questrami and Spicy Spirulina. It was futile trying to put more feed in so I reverted to just stringers on a couple and single hook bait on the other but still the birds found me.

Late afternoon I needed to do something as we were only doing one night and I really didn’t feel like I was fishing yet. I decided to fish a bait real close, in the hope that I could keep the birds away and at least be fishing to my edges with bait working and set ups fishing effectively.

I started to feel around close in and found 3 different types of weed in abundance. I wanted to see more so went and got my long handled rake out the Land Rover and raked in more. Now as soon as I started to do this it was obvious why it was fishing so poor. This weed was totally alive, absolute masses of shrimp, snails, mussels and caddis. I had also noticed a fair few damsels emerging.

One of James’s mates then turned up for a chat and it threw me a little from what I was doing but a new plan was coming along in my head whilst we chatted.

Every natural food item I had seen had been semi camouflaged. Very drab in colour, hardly standing out at all unless you were looking for it and it stood to reason to me that a well-stocked lake like this one, the fish had to be on a natural mind set for them not to be caught.

So, time to ‘match the hatch’ as best I could. 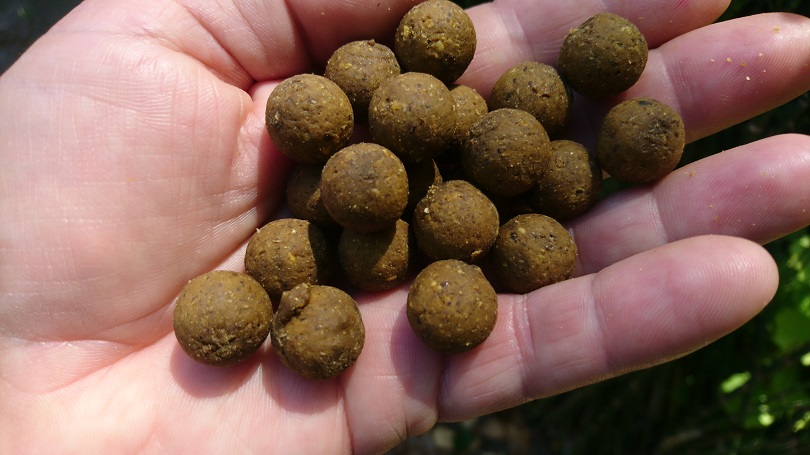 Time to match the hatch as the trout boys say.

Into the bait bucket I started to pick out the Spicy Spirulina from the Rahja and Questrami. It is dull olive/brown in colour and isn’t dissimilar in colour to a few of the natural bits I had been looking at and certainly over the weed and silt it would hardly stand out to the birds. Plus with all the freshwater shrimp and daphnia it contains, I had little balls of naturalness.

Eventually I had got myself sorted with plain simple bottom baits straight out the bag, with a small cluster of baits PVA’d to it for extra for the carp to home in on and I was away.

All three rods the same and now finally, the birds were leaving me alone. The first carp didn’t take long to catch after the change in approach, neither did the next or the big bream that wanted to join the action.

I turned in that first night quite content that I’d come, struggled, but quickly turned things around rather than sit it out with my approach that works everywhere.

Storm Hector really started to rage with winds up to forty miles an hour and I enjoyed showing off dropping my rigs back in bang on the spot despite having to compensate for massive gusts. James seemed rather impressed by this but to be fair I was only fishing around 70 yards. 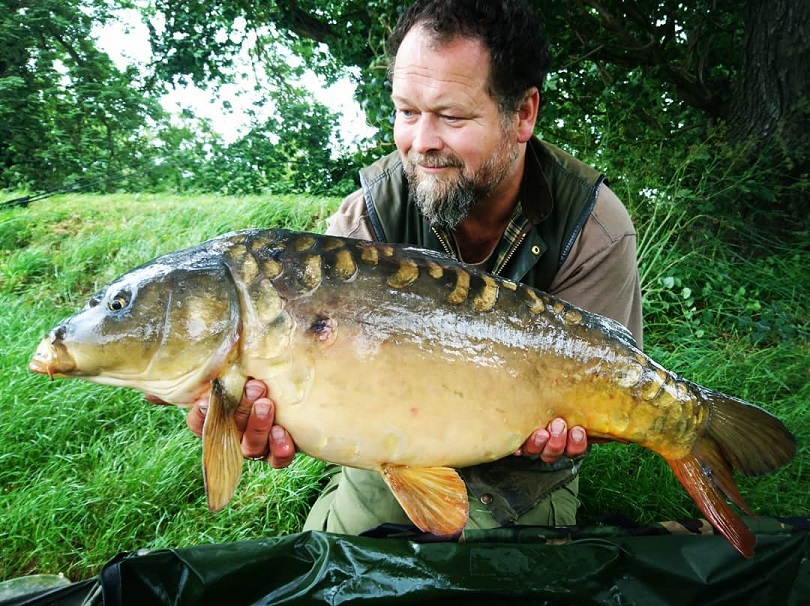 I ended up landing 5 carp after my change of approach.

I ended up landing five carp which I felt was a great result from a lake that wasn’t producing and all from simply taking a step back and re-thinking my approach.

By far the highlight of the session for me was James hanging his nose over the Spicy Spirulina’s after I had landed my third fish. Mockingly I gave him just one. He launched it out to the spot he had been fishing from the start and was soon playing a new U.K. personal best common. I did let him have a couple more to use. 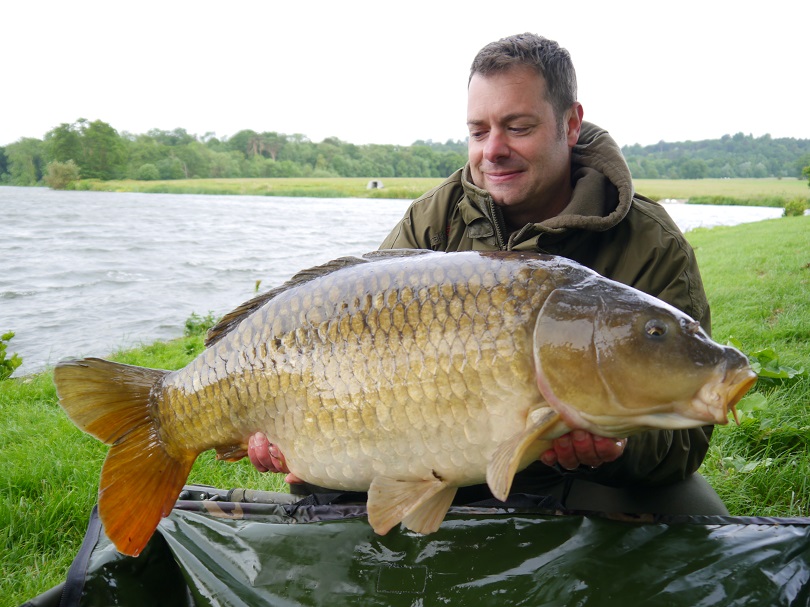 James bagged himself a new U.K. personal best common on the one bait I had given him.

Oh yes, I even ended up with a personal best myself. I’m told it is a much sought after fish on there and that too decided it couldn’t resist my little camouflaged baits. It was to be the first Koi over 20 lb I have landed. I have never really fished anywhere with Koi so that was a novelty to say the least. 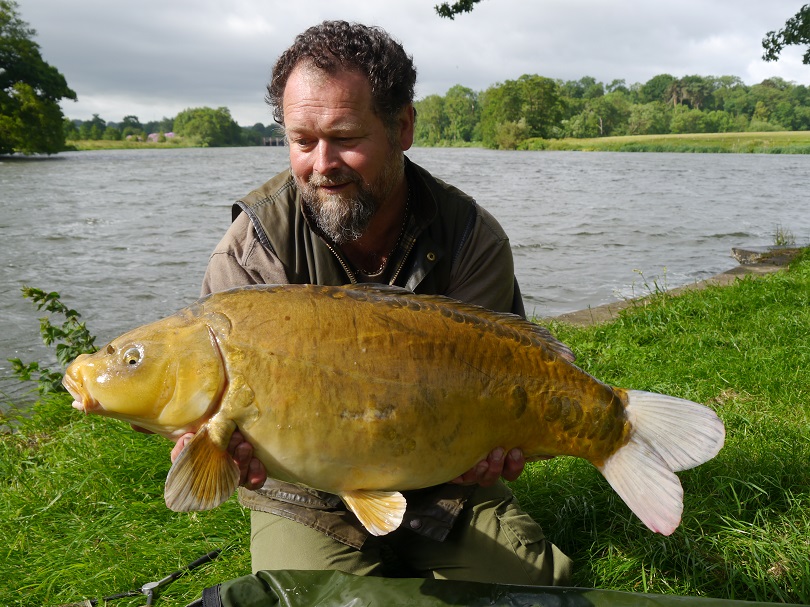 I even had a P.B. myself, my biggest Koi.

We ended our ‘one night session’ with 7 carp between us, a big bream, plus a couple of carp that got away with it. Every take had been on the Spirulina’s other than one to a Magnum White that James had pushed out into the wind. A total start contrast to what the fish appeared to be wanting, but that was the only take on that one.

Finally the birds had been defeated and the carp had been kind.

As a footnote, my local was fishing real poor this week-end. Thinking back to the session with James, I replicated what had caught there on one rod and within thirty minutes I was playing a fish.