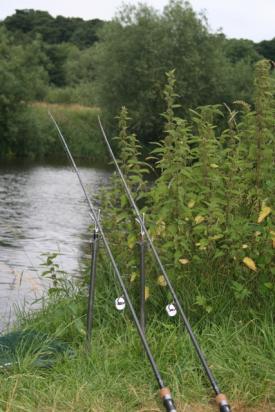 Thwackers in position gripped to the line so they will still move with the rod tips up.

This season I have been spending quite a bit more time barbel angling than I normally do so have subsequently been adding a few barbel type pictures here there and everywhere.

Now try as I might, I cannot bring myself to using bite alarms when fishing the river, it just seems too carpy to me and the reason I barbel fish is for a change of angling, not to emulate what I would normally do for carp. Besides, most of my river sessions only go on for a few hours so it isn’t as though I need waking up half way through a 48 hour session. But, I do like to take in my surroundings and generally blend in whilst watching the natural world go about its natural life. Because of this my eyes will wander away from my rod tips quite regularly. If something is scurrying through the undergrowth I want to see if I can see what it is as it sticks its nose out. Or sometimes I feel compelled to make a diary entry.

A few have commented wanting to know what the white plastic bits are that I connect between the butt guide and the next one up. Well, they are nothing new at all simple wrap around visual indicators that I used to use in the late 70’s whilst carp fishing. It isn’t my original idea to incorporate them into my barbel angling but was inspired by my good friend Dave Booth. He was always using them clipped on his barbel lines and it wasn’t until I sat chatting to him one day with both of us distracted from watching his rod tip when suddenly out of the corner of my eye something moved quickly and was followed by a very clear ‘THWACK’ as his cylinder hit his rod guide. Several minutes later I was netting a rather nice barbel for him.

A very short time later it was a reverse situation where by Dave was having a chat whilst I was angling and as I looked back to my rod I was suddenly aware the line was much slacker than it had been and whatever had picked my bait up was now firmly snagged.  I got everything back without the fish but vowed then to start using a secondary visual indicator to exaggerate a drop back as sometimes the upstream rod can often only have a slight bend in its tip and a drop back isn’t always as noticeable as it could be, particularly in the dark.

So, having encountered a possible issue I immediately worked at finding a solution and Dave’s method seemed the obvious thing to do. 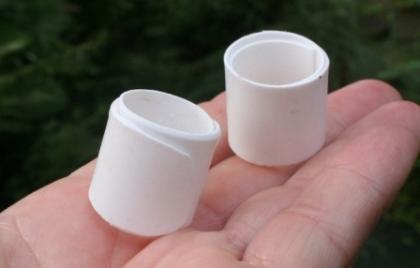 I would be lost without these on the river

Now here I am several weeks later and now find myself lost without my little ‘Thwacky Racers’. Not only do they give a very clear and audible ‘Thwack’ against the rod (my small free spool reels are relatively quiet) the small cylinder moving seems to catch your eye even when not actually watching them.

How to make your own ‘Thwacky Racers’

Dave’s were made out of the old wine bottle shrink caps we used to be able to buy easily but the modern ones are much too flimsy so I looked around for what I could make some new ones from and the answer was staring at me from my bait bucket as I found our Quest Baits Boilie Dip Pots to be perfect for the job. 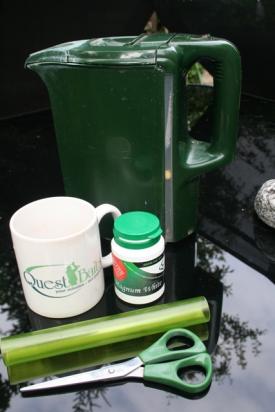 All you need to make your own

Step 1 – Fill the kettle and boil some water

Step 2 – Whilst waiting for the water to boil cut the top and bottom off of the Dip pot.

Step 3 – Cut a slot up the tube you are left with.

Step 4 – Cut the plastic to the size you feel you need. I have simply been cutting my strip of plastic in half to produce 2 x Thwacky Racers from one Dip pot. 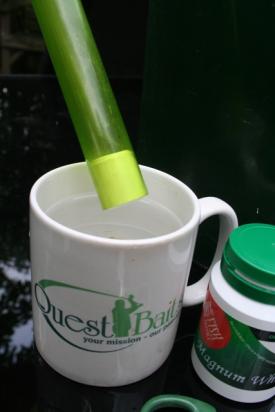 Step 5 – Roll the plastic into a tight coil and then insert it into a tube of appropriate size. You could use a wide diameter bank stick, a tube of similar metal or in my case the thing that came to hand first was a tube from one of my PVA Stick systems.

Step 6 – Dip the tube and rolled up plastic in the boiling water and leave for a minute or so. 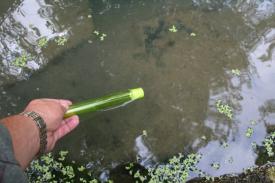 Step 7 – Remove from the boiling water and plunge it into cold water or simply run the cold tap over it.

Step 8 – Remove from the tube and here you have a newly formed Thwacky Racer. 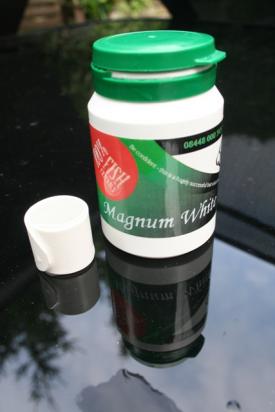 From a Dip pot to a Thwacky racer

I will end this piece by explaining why I prefer to use them rolled tight like a mini spring. Sometimes I need to get my rod tips up high  and with a simply cylinder on the line the line can be taken without the indicator appearing to move so defeats the object a little. By using them in the pre-formed coil you can trap the line between two coils so even with the rods practically vertical you will still see them rattle off up the rod and give that lovely sounding ‘Thwack’.

These secondary indicators also come into their own in foul weather when you sometimes need to shelter from the rain and can’t always see the rod tips properly without getting soaked. There is no issue watching the little white racer though.

They can be used between the reel and the butt guide but tend to get thrown off when you wind which means you then need to go and look for them. Between the butt guide and the next one up they can be left in place whilst you play your fish.