Home Blogs Catching back up Blog - a Diary entry.

Work has really got in the way this year taking on a lot more than I had possibly intended to, but I have still managed to retain my lucky angling streak. So, what has happened since the beginning of August where I left the last piece?

Well, the following weekend I found myself fishing the deep pit and must admit to finding it pretty hard going. I never really felt that I was on the fish and had very few options to move, so I dug in and played the waiting game. I had chosen the swim and set up with fish out in front and certainly within easy casting range, but between the carp and my pitch there were snags and I won’t do that to the fish, cast over snags and hope they fight high in the water.

I had banked on the fish moving closer but they seemed loathe without enticement so I trickle fed bait out to them in an effort to draw them. Eventually one followed the trail and after a great deep water fight (I find they all feel larger in deep water with the extra weight of line drag) I was finally to see a glorious golden common in the net and my feared blank was saved in style. 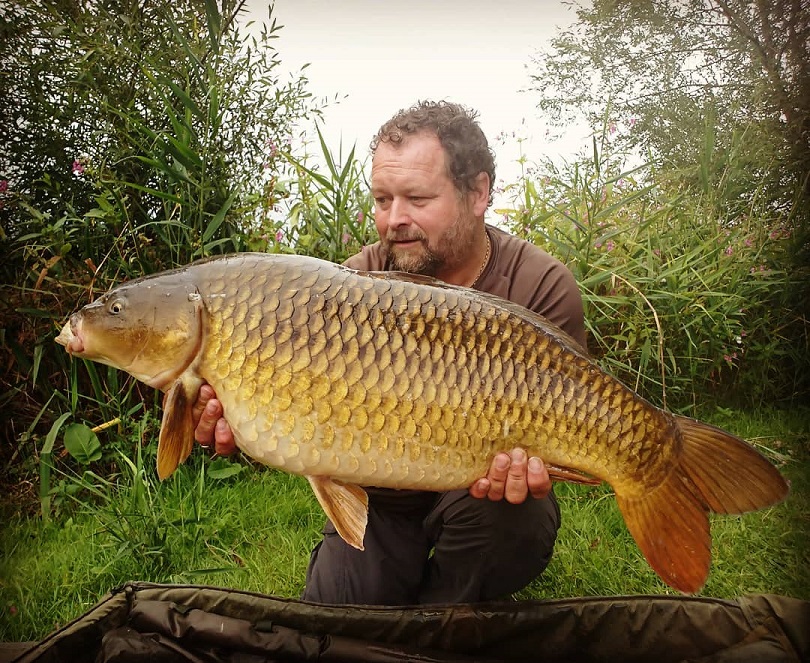 A glorious golden common from the depths

That capture ended yet another of my handwritten angling diaries, so now I’m reaching for my current one to see where my angling took me next. 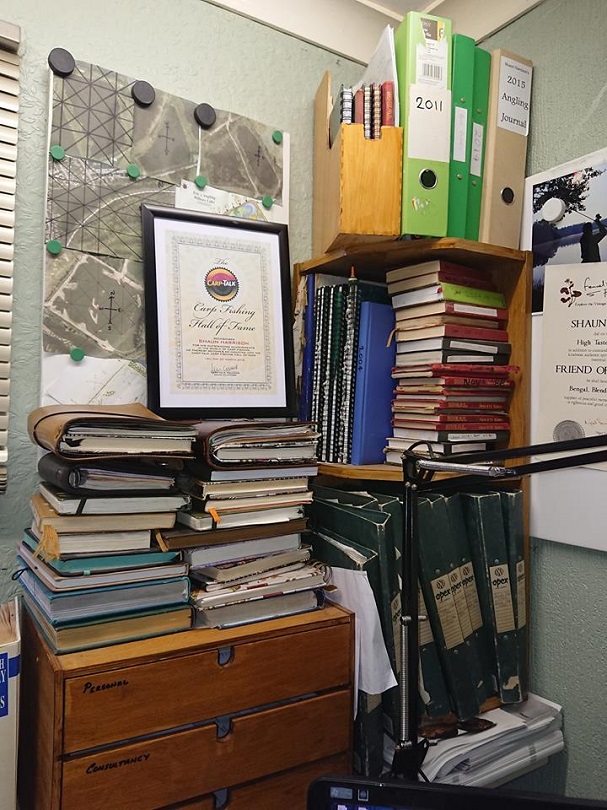 Ah, that’s it I was off on a rare trip for a social on a gravel pit that I have dabbled on for the past 35 years. I was meeting up with a mate on the Saturday morning, so Friday evening I decided to have a couple of hours after work elsewhere and so pleased I made the effort when a glorious old black mirror took a liking to the Spicy Spirulina which had been fished just inches from the margin on my lovely forgiving 10 ft Bank Creepers. I would guess the carp’s mouth and my foot were no more than 10 feet apart when I hooked it, so as you can imagine the fight was rather spectacular to say the least. 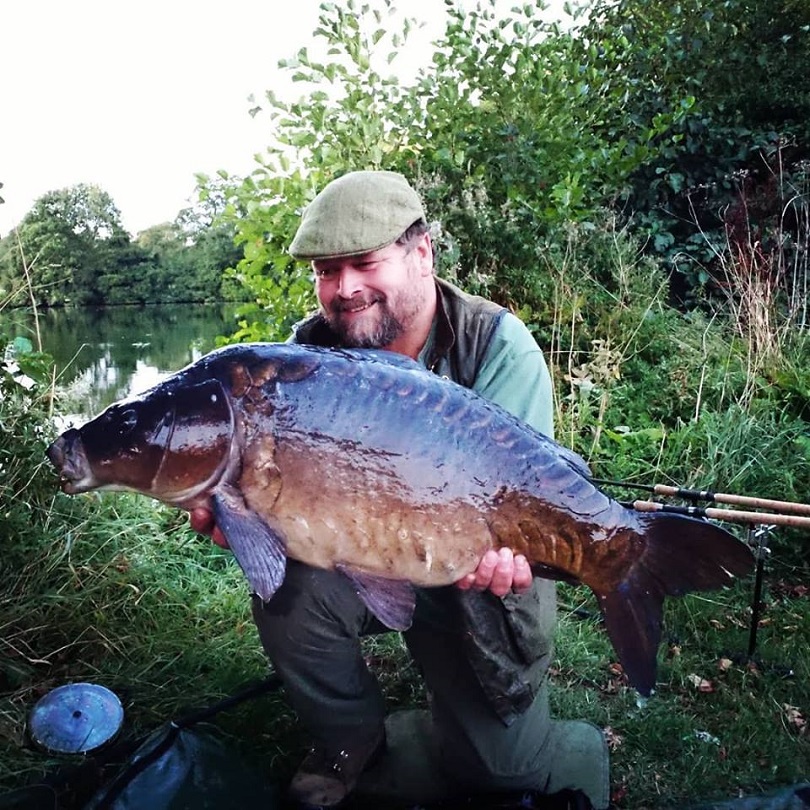 I was more than content with my evenings work so packed away after a couple of quick self takes on the mobile phone and then back home to sort my final bits out for the social the next day.

I arrived at our meeting point at first light and marveled at that damp feel you get in the atmosphere as the summer slowly starts to lose its grip. It was September 1st, the weather was warm but the grass and surrounding abundance of vegetation was shining silvery, wet with dew.

We did a lap of the pit and then another and I then did a third alone before I could make my mind up where to angle. I only had the one night to try and make something happen.

As it turned out, apart from our two laps and a good old chin wag after we had packed up. Well, that was the only social we had as we ended up fishing in totally different parts of the pit, not even in eyesight and certainly too far to go wandering with a mug. This suits me fine, I love the odd social but sometimes it just doesn’t seem right to double up in an area and this was one of those times.

The water was very clear and the odd fish were easily seen gliding in and out of the bay I had chosen for the night. So, rather than risk the fish seeing me, I decided to opt out of messing around setting a bivvy up and simply tucked my bed behind a natural screen and kept movement down to an absolute minimum. 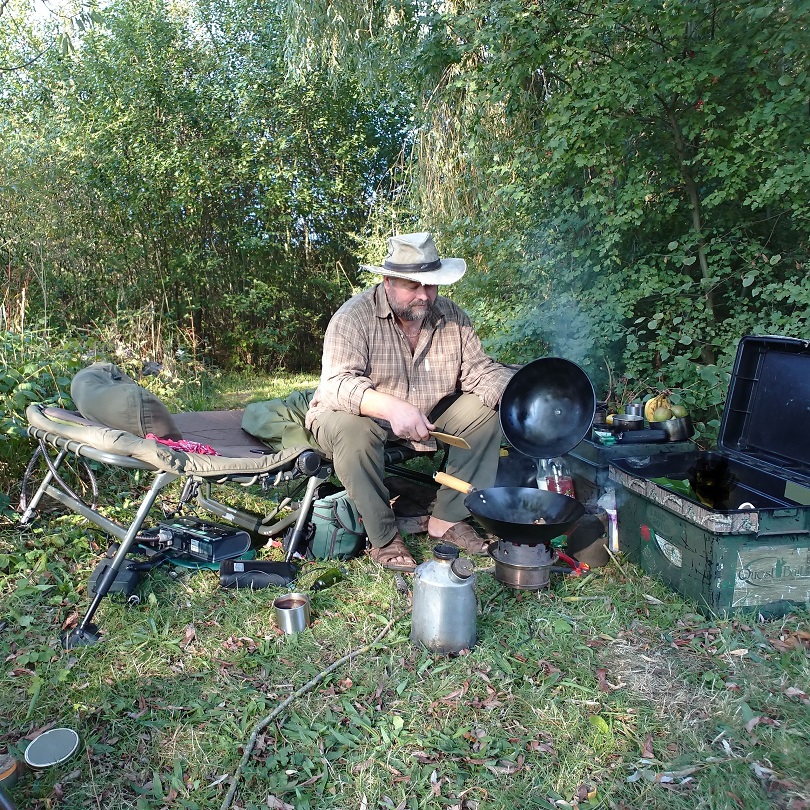 I kept out of sight

Old style carping which was always the natural way, but somehow or other the fact that fished for carp can be very spooky and the importance to remain concealed on some venues, appears to have been forgotten about by many. I stopped fishing another lake last year because other anglers were spooking the fish in my swim when they came visiting. Hours of work getting an area primed and ready only to see it unfold within minutes of a social visit, or more to the point… “I’m bored so let’s go stumbling clumsily around the bank and see what others are doing”.

So a night staring at the stars and getting bitten by mozzies it was to be. I seemed to have got it right though as at first light I found myself into a carp whilst I could see another in the bay too. I was crouched so low playing that fish that I was almost laying down trying not to spook the other one which I could clearly see on my bait. Suddenly there was less need for stealth as the other fish suddenly bolted and my ECU alarm told me what I’d seen with my own eyes. Two carp on and just one landing net, suddenly I was very busy. 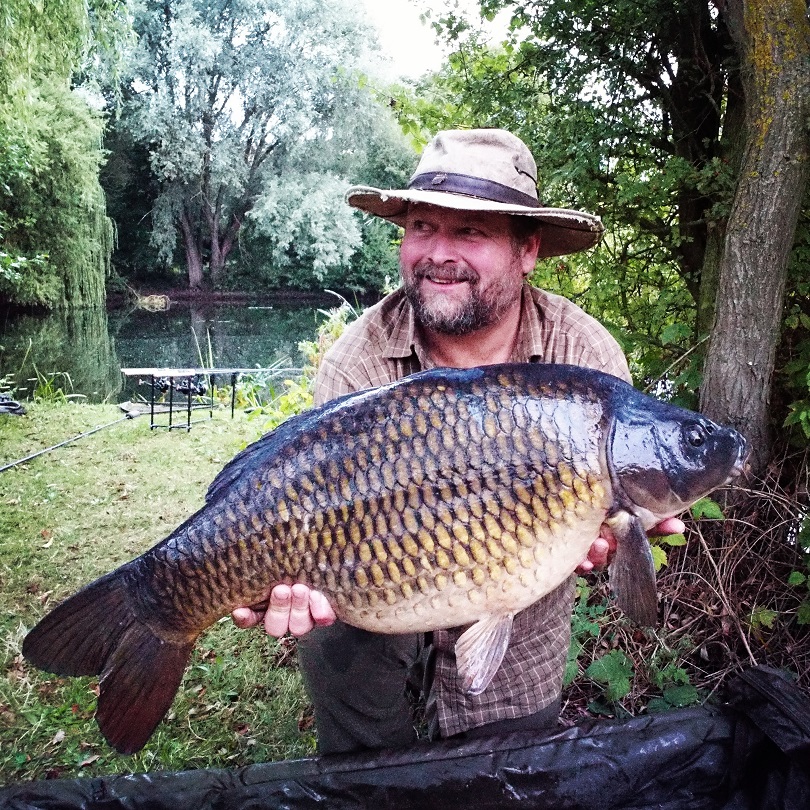 Everything went well though and a bit of juggling around with the rods saw a common and a heavily plated mirror sat side by side in my net. Another mission accomplished.


Both fish had been over separate beds of Spicy Spirulina although the second one was on a Magnum White hook bait (bottom bait straight out the bag) gleaming among the freebies.

All of the captures above for what it is worth have been small 1 and a bit ounce lead captures with straight out the bag bottom baits. During the solitary confinement social session Bob had been surprised that I was casting bottom baits into silkweed. I mentioned that he had said the place was fishing hard and the fact that every ‘totally  safe’  bait the carp pick up are hard on the bottom, not popped up and hovering.

Not wanting to or having the time to write a ‘War and Peace’ length blog, I will finish this one here as I have quite a few more captures to add and will hopefully get them down on paper translated from my diaries soon.

Thanks for reading and best wishes as always
Shaun Harrison