I had a photo shoot with Steve Broad and Mick Rouse in the morning for Angling Times ‘U.K. Carp’ magazine where I was demonstrating my line marking method on my marker rod where I can tell exactly how far the marker is by the dots on the white braid that I use.

Fortunately we had arranged to do the photo shoot at a convenient venue for all of us to meet up at. Convenient for Steve and Mick as it was close to their headquarters and convenient for me as it was within 20 miles of Grenville!

Everything went fine first time so I was able to get away in good time to arrive at Grenville during the afternoon before I hoped the main crowds appeared. I was wrong – Grenville was thronged with anglers leaving very little choice of swim. I opted for 34 in the South West bay. Not because I felt the carp were there but more because I felt the carp may end up there and at least I had plenty of my own water to go at.

With strong West/North West winds I was able to reach a spot I had caught well from before but I hadn’t been able to reach for a while as I needed wind assistance to stretch the cast those last few metres.

No action and nothing seen in this bay but little option for moving. The few swims available don’t look as inviting as the one I am in. 25 has produced a 43 and just odd fish elsewhere. 25 is actually situated similar to myself in as much as how the weather is affecting it. Perhaps I am in with a chance?

I am now pretty certain nothing is in or coming into this bay. I say bay I have fished a lot of carp lakes much smaller than this bay!

I have just had a bit of a walk and spotted fish out from 32 and 33 looking as though they are heading up towards 25 which was vacated yesterday in the Noth West corner of the lake.

A quick pack away and 3 rods baited with a mixture of Fluro’s and Pimple Pops soon found there way out into the distance to await the arrival of the fish I had seen.

Within the hour I had a gorgeous scaly mirror in the net that had fallen to a Ultrabrite Fruity Trifle pop-up shotted down to the deck. The move for the last hour had been well worth it and with the skies starting to blacken with an expected down pour I decided to call it a day quite content with my blank saving scaley. 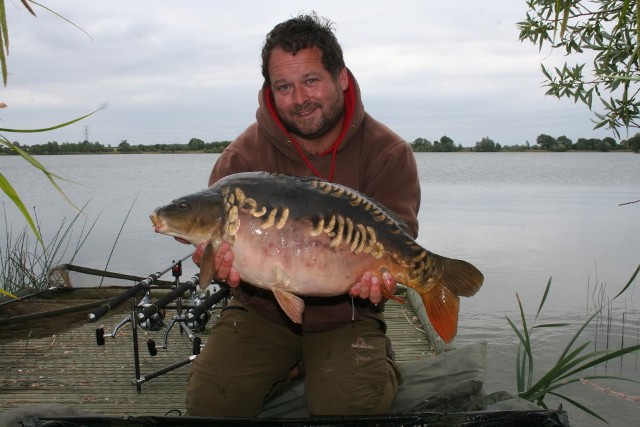 Well worth the move

An early start saw me walking the banks of Grenville once more and having allowed myself a couple of days off work I went in with a plan to bait heavily and sit on it. Ron Key was going to join me for this joint exercise so swim choice was important as to allow both of us to fish the same baited area. This proved more difficult than we thought. Although Grenville has 37 swims (numbered up to 38 but there is no swim 13) they are very sensibly spaced apart along the 1 ¾ mile of bank so shared baiting isn’t possible everywhere. I had the other problem that since planning this trip with Ron, in fact last night he had a telephone call that a member of his family had taken ill and had been in a  Spanish hospital but was now on a train heading home. Ron’s car was loaded to come but he couldn’t shoot just yet as he had to drive up to Yorkshire to the rest of his family to offer support and collect his nephew who had taken ill from the railway station. This meant I needed to choose a swim which could be shared from either side not just one side.

I started the baiting alone with a mixture of boilies how I prefer to fish. The weather is far from ideal with quite high air pressure and calm conditions. Still, I have 4 days ahead of me for the carp to turn up.

Although I have kept this detailed diary since I very first started angling I have been guilty over the years of going periods of not filling it in and now is one of them so catch up time again. 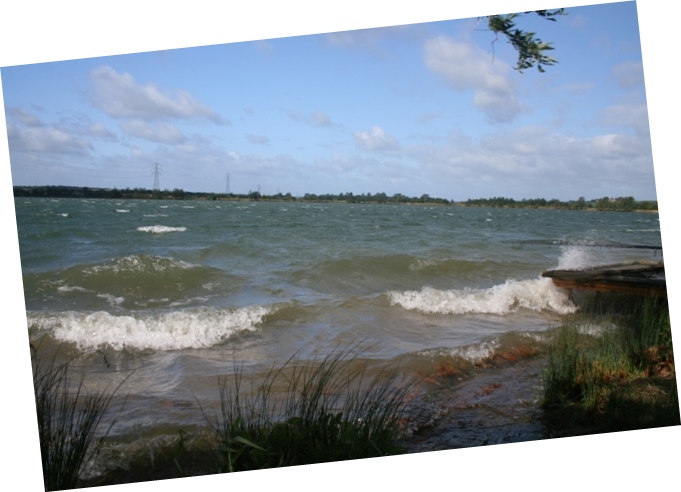 The wind and undertow made fishing impossible with the maximum 3 oz leads we are allowed.

Here I am a week on realising I didn’t keep the diary piece going – again!

….Saturday a very tired looking Ron finally made it and slotted into 14 which was still available. The wind started to kick up as anyone knowing Grenville will know just how bad it gets and by Sunday we were no longer able to reach the bait despite it only being at 110m and neither could we hold the bottom with the maximum lead size which is allowed. Our 3oz leads were simply dragging along the bottom in the undertow and allowing the hooks to grab the weed making the fishing a pretty futile affair. In the end we both decided to call it a day despite a silly amount of bait being out in the swim. This was the first really heavy baiting I had done in years and the weather had come and kicked us in the teeth. Hey ho! 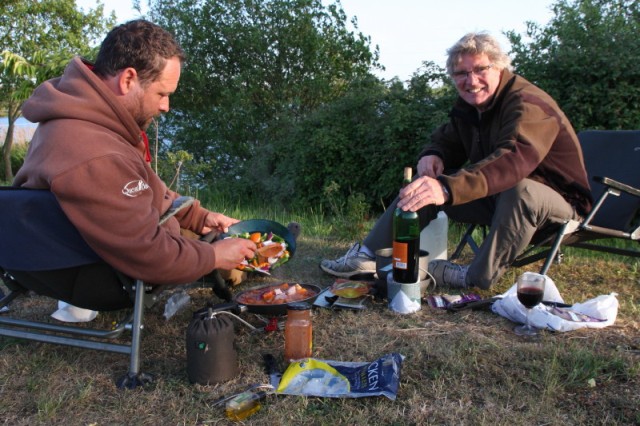 Cooking the evening meal in the shelter of the bushes

As a footnote to this the wind continued the whole of the next week and fish turned up on the bait big time. Although we weren't there more than one angler told us later that at one point you couldn’t look out without seeing several fish rolling on it. The carp benefited big time as no-one else could reach them against the wind either, so with a load more bait down them they should be more confident the next time they come across my mixed bed of boilies.

During this session I did start to hatch a plan about starting to fish the deeper water. So many of the members avoided the 30 ft plus areas but I had come up with a theory about the colour of the fish which seemed to suddenly make so much sense in my mind. The scaly from the previous week from the shallow water of 25 was very dark in colour compared to a lot of the Grenville fish. Some of the fish are darkening off nicely but many are still quite pale by comparison. Grenville is incredibly clear and you would expect all the fish to be dark. It suddenly seemed obvious to me that the dark fish were living most of their lives on the plateaux and the paler fish were living in the deep water and some of the big fish were still quite pale!

I spoke to Ron about this and said I was going to start fishing the deep swims to try and prove it one way or another. The beauty of these was that you can generally get in them on the week ends even when it is busy.

As I drove out Paul Allgood was returning a 35 from swim 33 and yes you've guessed it caught from deep water.

A couple of days later the wind had made it practically impossible to fish into it and Dave Gowling being forced to go behind the wind found himself playing a 40 lb mirror from 31 in the area I was intending to look at next trip. Dave moved out, Ian Warner moved in and had a 38 from the deep water.

Best laid plans eh – I was a few days too late but nice that my theory seems to be not too far out.

Friday May 27th 2011 and the last week-end of the Grenville season.

With over 20 anglers here when I arrived I had no choice but to slot between other anglers. Ian was in 33 and Gary Mills in 31 I okayed it with them to slot into 32. Gary was to be off in the morning so I could move up a swim in the morning if I wished.

2am and the sweet sound of the ATTS dragged me out of bed to a take at extreme range. The fish powered off and took quite a lot of line even at the range I had hooked it. Unfortunately I pulled out and felt afterwards I had been a little gentle on it and should have pulled harder.

3.30am and Gary came and woke me to ask if I would weigh and confirm the weight of a big fish he had just landed. I weighed it on Gary’s scales at 45lb 2oz so telephoned Paul who runs this incredible lake who likes to weigh the 40’s himself on the official Grenville scales. He didn’t mind being dragged out of bed for this one and soon his van could be seen driving down the track. I filmed the weighing as it was daylight by the time we were ready and imagine our surprise when the needle spun around to 45lb 5oz a new lake record!

Gary left mid morning in a bit of a daze and Ron turned up just in time to take his place which meant I was still in 32. To be fair I was quite happy here having had the chance earlier in the morning and more proof that these big fish were living in the deep water as Gary’s 46 had also been from 30ft plus. 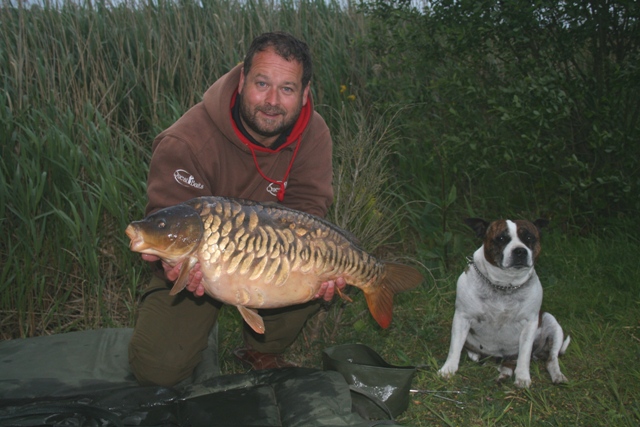 First light and a double Pimple Pop fished at 173 yards produced a take resulting in another one of the gorgeous Grenville Scaly’s.

That evening Ron and myself sat and celebrated his birthday which was about to come around. 4 am and 4 hours into his birthday we decided it was time to hang the wine bottle up for the night and get some kip before it turned light.

8am and Ron’s birthday present turned up in the shape of a 30lb plus mirror. What more could a man ask for?

Well another season has run its course on Grenville and with a fair few members leaving for good, but new members slotting it to take their place, next season will be a whole new world again. I can’t wait!