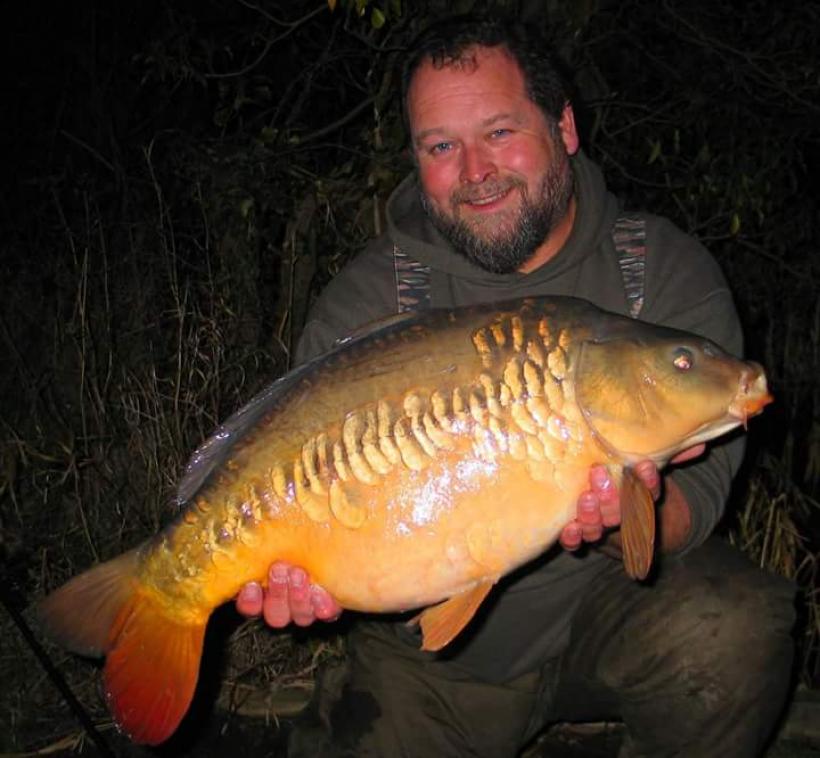 One of the two in the net at the same time. 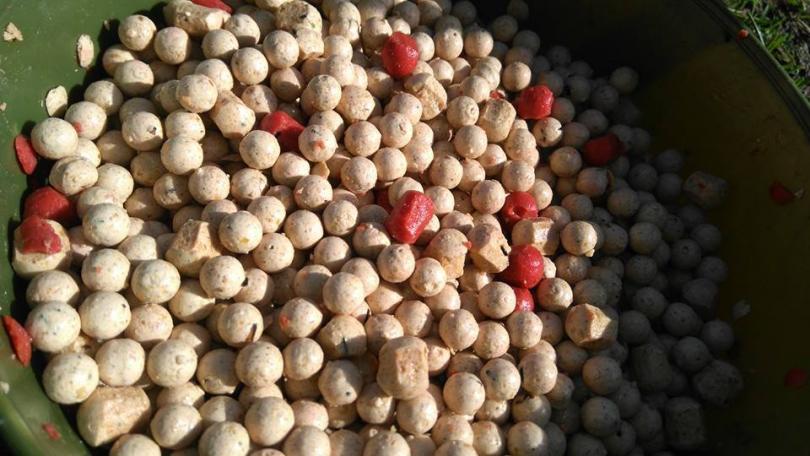 Carp wise my tactics have been simple no nonsense winter stuff that has worked consistently for me during the winter, year in and year out. Basically fishing over a small amount of soft and easily digested bait, just recently this has been consisting of 10 mm Magnum White with a handful of trimmed 15 mm Fruity Trifle and Magnum White too but sat in a diluted glug for a few days before use to really open up the pores of the bait and allow it to work so much quicker than a sealed bait out of a bag.

I was feeling a little un-motivated at the split between January and February despite me catching well on previous short day time sessions. I drove out to 3 of the waters I have been fishing and neither really looked right and I was starting to consider the river when the 4th venue just looked good for it. I can’t describe that, I saw nothing and this particular water has a real poor winter record not giving its fish up too easily, but for some reason it looked better for a fish than the 3 easier venues. So, it was to be a early morning start there. 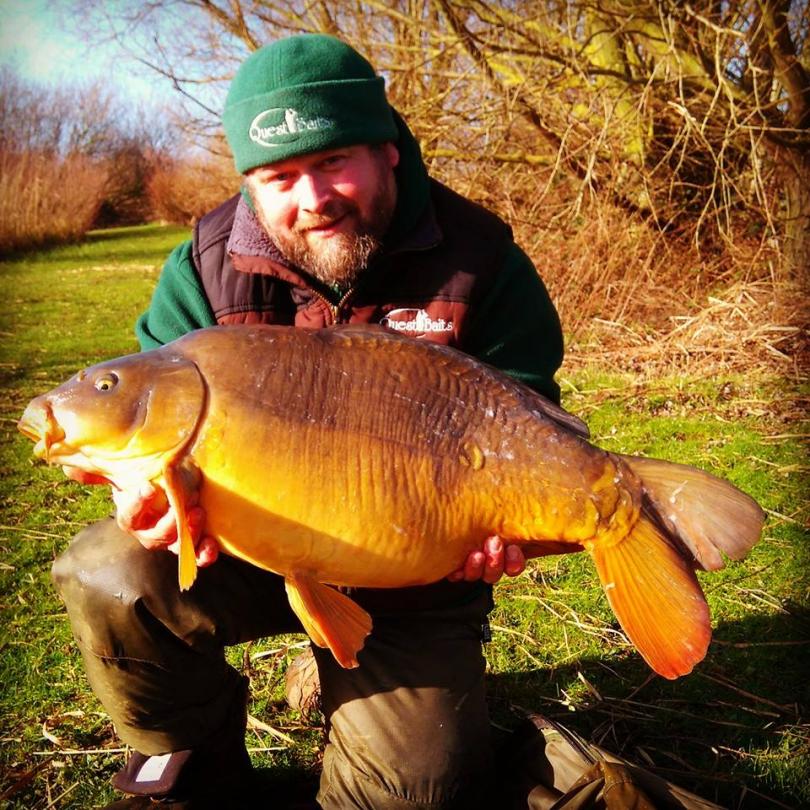 I only baited lightly with halved 10 mm’s so as to hardly make a disturbance but to offer something and spread some underwater attraction. The 1 oz (and a fraction to keep them legal) bombs went in relatively silent and it was obviously to the carp’s agreement as it wasn’t long before I was slipping the net under another glorious winter fish. 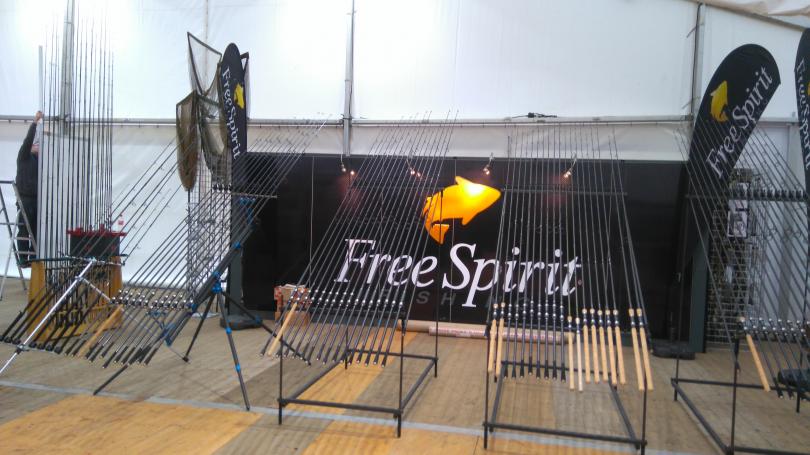 The show weekends are real hard work but very rewarding too.

The Brentwood Carp Show was looming and I was required to attend Friday until Sunday in my long term role as Free Spirit Fishing consultant, so because of this I slotted in a cheeky mid week after work session on Rosehip. Setting up and casting in the dark was well worth the effort. Two baits out, 6 Mini Spombs over the top, flask lid off and the left hand bait was grabbed by a carp. It was a great fight on my 10 ft ‘S’ range Bank Creepers I use for my semi mobile carping and i was just starting to get the upper hand when the right hand rod came to life as well as another fish had taken that bait. I picked the second rod up in my other hand and held it hard to make sure the hook was set before laying it back down on a free spool and hoping it stayed one. My luck held and soon two more February carp were sat in my landing net. February had started just how January had with a glut of carp. 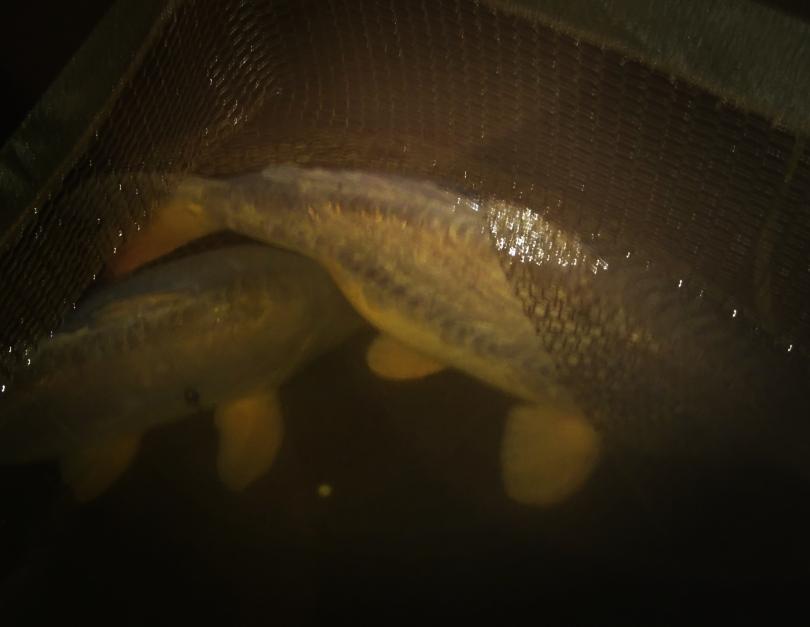 Two in the net - definitely worth making the effort after work on a winter evening.

The show went very well and the week following interrupted with my own angling a little. The Tuesday I had to interview someone for B.C.S.G. acceptance and was delighted that he made the grade.  Thursday I had a client booked in for one of my one to one winter guiding/tutorial days so that took up the previous evening. The guiding went well in very difficult conditions and the message that came through the following week proved it had been very worthwhile.

"Bait arrived thanks. Knocked a little mix up and popped up my lake which doesn't do many bites over winter and I've just put back a lovely 22.4 scaly mirror. Not even been here 2 hours.
Very pleased. Think you may have a new customer Shaun.
Trimmed Fruity Trifle just how you showed me on the guiding day, over 2 handfuls of the Magnum and Trifle mix. Right result in February on here especially when the lake is half frozen".

Unfortunately I felt my health deteriorating during the day. Now it is very rare I’m ill and must be 20 odd years ago the last time I was ill, but a bug swept over me that totally wiped me off my feet in the next few days. I was going through  the red hot to freezing cold, really aching and tired as well as being thick with cold, a cough, mouth ulcers, cold sores, the lot. I was proper run down and to make matters worse this new website which we were launching had run into various obstacles which meant our old site was off line and this new one wasn’t properly running and we were unable to take payment for orders received. If you were one of the ones inconvenienced by this, I again apologise. 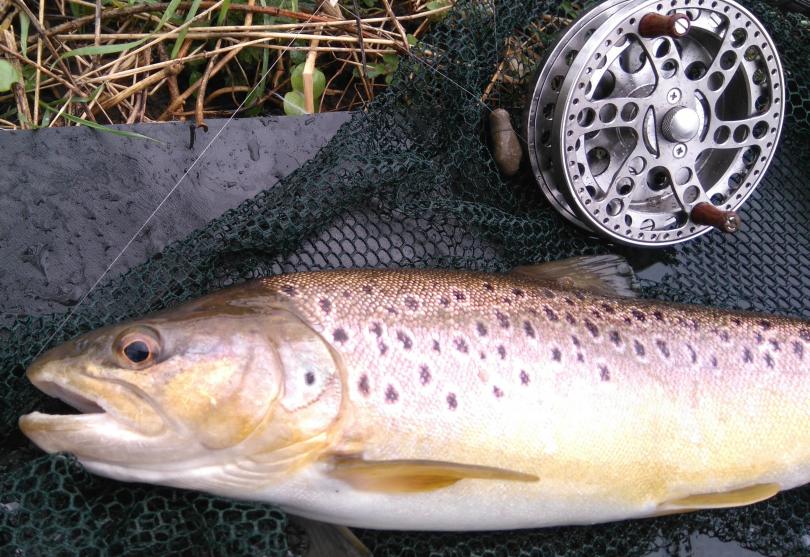 A bit of a nuisance, but still good fun on the Rahja Spice Paste.

I was properly ill for getting on 10 days and still not totally right now. When I eventually forced myself back out on the bank, I felt weak and could only muster up the enthusiasm to carry a light chub rod and absolute minimum of kit whilst dropping a bait here and there on the river. Rahja Spice kept me in action though as my first Chub and a few nuisance Brown Trout (although good fun) of the year started to rattle the rod tip. 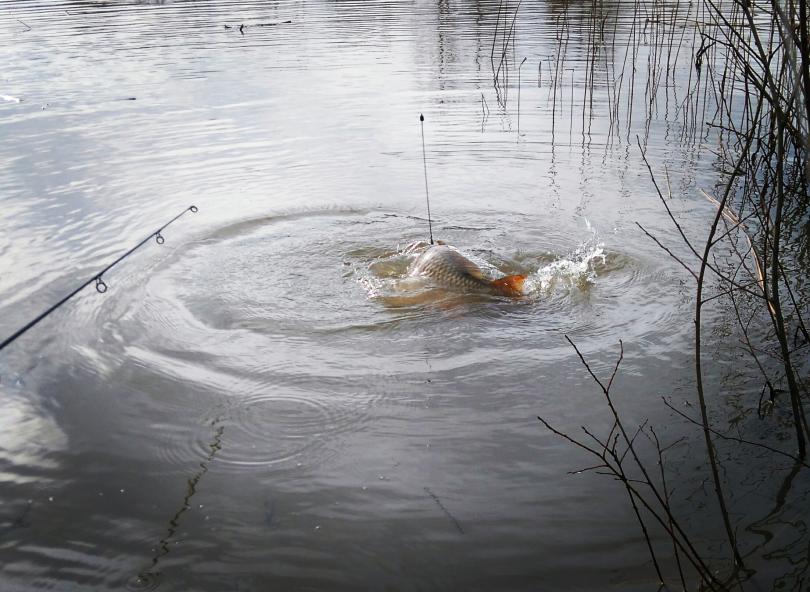 It was as though they had been waiting for my bait.

So, that brings us to the end of February and finally I got my carp rods back out and caught as soon as I cast out into Perch Pool. It was as though the fish had been waiting for me. 2 little Pimple Pops over some 10 mm Magnums was what they wanted this time and an hour after the first mirror a common fell to the same rod.

I hope March carries on being as kind to me as January and February were.