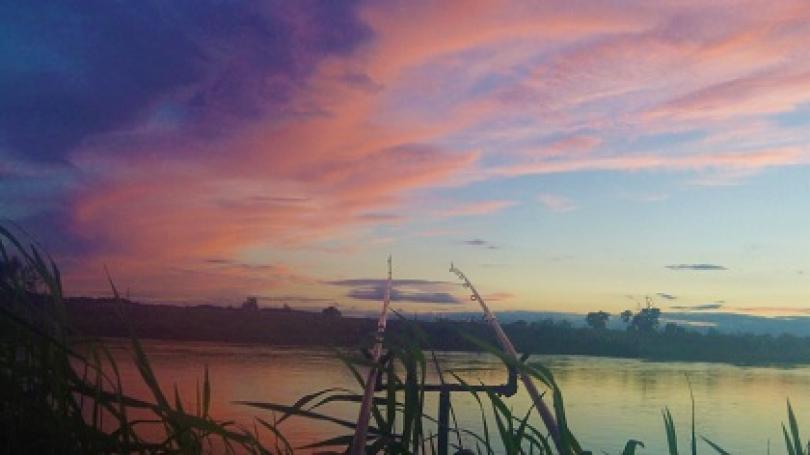 I will be concentrating on the Upper Trent, Derwent and possibly the Lower Severn. I have not fished the Lower Severn for a good few years (had a lot of enjoyment and a lot of doubles when I did), but with the continuing decline of the smaller rivers, I feel the bigger rivers will give a much better option of a chance of year round sport. 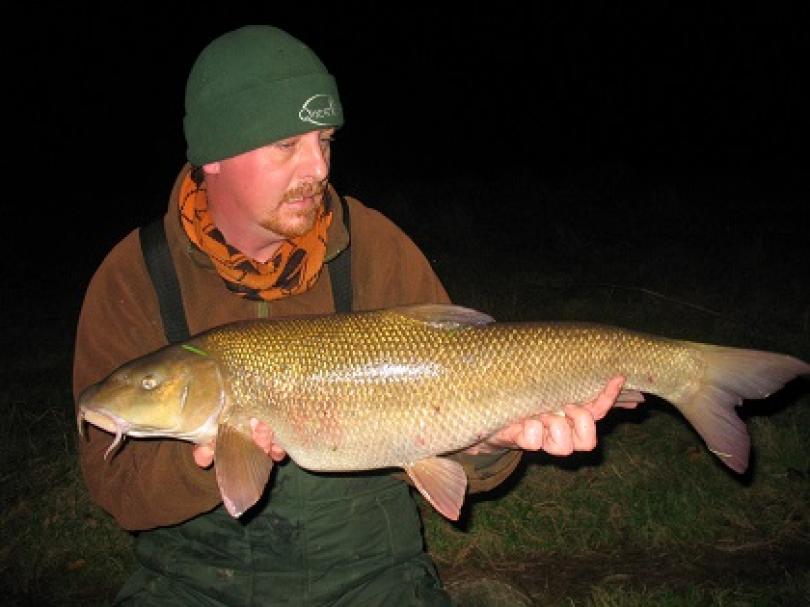 Lovely Lower Severn 13+ from a few years a go.

I am not to sure how much longer the fishing on the Upper Trent will last either, as there has also been a steady decline in barbel numbers, thus leading to a much heavier average weight, (around 80% of my fish being doubles last season), but with very few small barbel, this can't be good for the future! 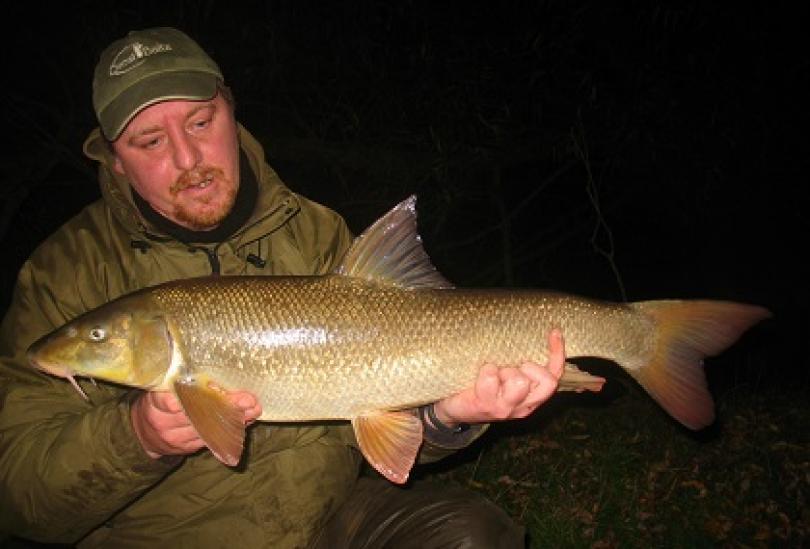 An Upper Trent stunner – but for how much longer? Make the most of it while you can!

I don't want to sound like the 'merchant of doom', but I believe we have really seen the best of the barbel fishing and it will be in a steady decline unless some major steps are taken. So make the most of it now, whilst you can!

I have fished the Dove on and off for a number of years, but I can't see me doing much on there this season. It seems the fishing on the Dove was particularly poor last season (there seems to have been a declining trend in catches for a couple of seasons at least). Personally I put this down to a generation of fish coming to the end of their life cycle at more or less the same time. It is estimated that most barbel only live for around 15 to 20 years (with a possible maximum of 30 years). Well a lot of the bigger fish on the river were certainly older than 20 years old. Looking at the number of recaptures of the bigger fish I personally don't believe there were the number of barbel present that a lot of angler's believed anyway. An angler quite naturally takes a lot of notice over a big fish and so will soon see if it is a recapture, if this amount of time was taken over every barbel capture, then I reckon it would show a lot more recaptures on small rivers like the Dove.

It really is a delicate balance on the smaller rivers and doesn't take much to upset it. So when you add such things as Otter predation, illegal poaching and the poor recruitment of smaller barbel and I personally think the immediate future for the Dove looks pretty bleak. I really hope I am wrong, because it is a lovely river, but when you look at other small rivers like the Teme, Cherwell and Bristol Avon (to name but a few), then I fear the worst. 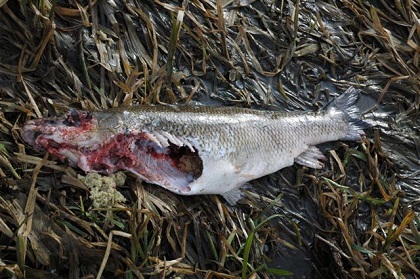 How much of this has gone on, in the 3 months, with no angler's present?

You often hear people say, nature will find it's own balance, but this is not being allowed to happen because of human interference. For example in the terrible flooding last winter, there was a news story of a number of abandoned otter pups (it was around 16 if I remember correctly) being rescued. These will no doubt be hand reared and probably released. Now if nature had been allowed to find it's own balance, by 'survival of the fittest', these pups would have perished. That may sound harsh, but it is true. That is not an isolated case either, there are many similar stories, but in smaller numbers.

Then you very often hear the argument of barbel not being an indigenous species to the UK. Well how long do you have to be here to classed as indigenous? There is evidence of barbel being present in the Trent and Thames (and therefore their tributaries), from around 8000 years ago when Britain as a land mass, was split from the rest of mainland Europe. Surely that is long enough to be classed as an indigenous species!

As I say, unless something is done, I can see a future for angling where there is very little left, apart from 'fenced off' lakes. Surely we want future generations of anglers to have more than this!

So if the start of the new season is anything like the last few, then it will be a case of trying a number of different venues, to just try and locate a few fish to start with, frustrating at times, but all part of the bigger picture of river fishing. You still have that, 'air of mystery' remaining, that to me is what fishing is all about. Not for everyone I know, it seems more and more anglers' want to know exactly what is in a venue, what numbers, heaviest weight, what names etc, before they even contemplate fishing. I suppose it comes from having fished for over forty years now, but more and more I want to get that 'sense of the unknown' back, and the bigger rivers to me, are still the place to do it. 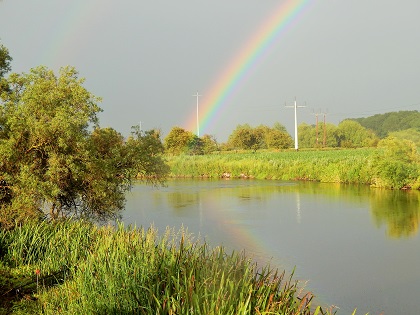 Totally unspoiled! - I will be trying a number of different stretches!

I have had a fair few correspondence with various anglers over the last few months, with guys asking for advice regarding baits and method's for barbel fishing (the question of which bait to use, is hardly surprising, when there seems to be new bait companies 'springing up on a weekly basis!), and it is always interesting to share my thoughts with them.

Within the Quest Baits range I have personally used the Special Crab (I first used over 12 years a go, if my memory is correct!), Rahja Spice, Absolute Seafood and most recently the Questrami with plenty of success regarding the catching of barbel. I have had 13lb+ fish on all these baits and from a range of rivers.

I have recently ordered my bait for the coming season. I shall be starting with an old faithful, in the Rahja Spice and the newer (for me), but very successful Questrami. I picked the Rahja, because it is also an excellent chub bait, so if I can't find any barbel whilst doing my searching I may pick up a bonus big chub! I have gone with Questrami, because although I only used it for a limited amount of time last season, I was impressed with the results and really like the baits texture and nice subtle colour. The paste also seems perfect to me. 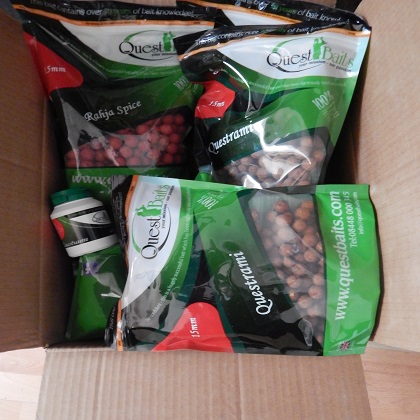 Bait ready for the new season!

Well that's enough of my ramblings, so here's to wishing everybody a great start to the season and I look forward to seeing the catch reports come in!