Anyway, enough of that, it isn’t the reason of this blog. I thought I would simply pen a few words as to how I have been catching a few fish. Three of my last 4 blogs have covered some of those trips and my success has continued since. 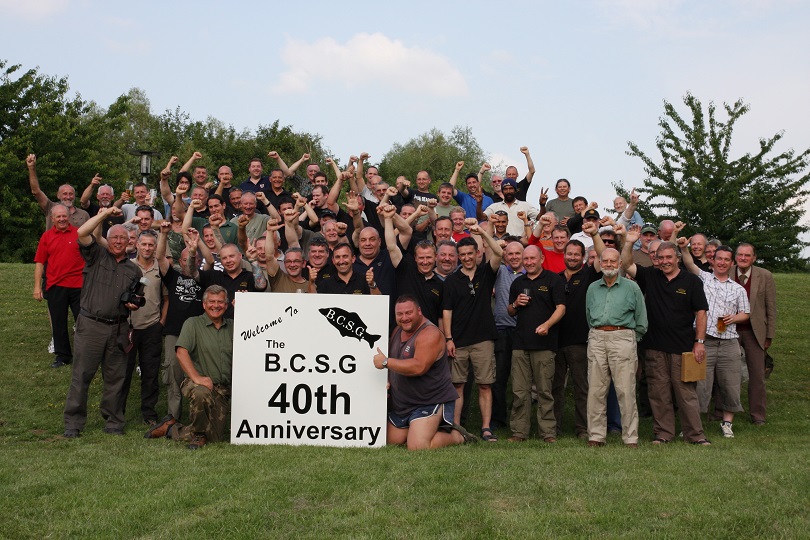 A shot from our 40th year celebrations. Next year sees our 50th!

This last trip saw me down in the Colne Valley, the fifth different venue in as many trips. I was down there for the British Carp Study Group A.G.M. and rather than fish over the week-end which stretches out with a barbecue and great social, I decided to wait for everyone to drift off on the Sunday and then set about trying to find myself some fish to fish for.

The weather was far from ideal with the hottest days of the year burning away, but with the 3 ½ hour drive down in horrendous traffic which reminded me as usual, never to live anywhere near the M25 I didn’t fancy the drive back home straight away and to be fair due to certain health issues, I couldn’t really have driven back Sunday anyway as more sleep would be needed before I could attempt that. 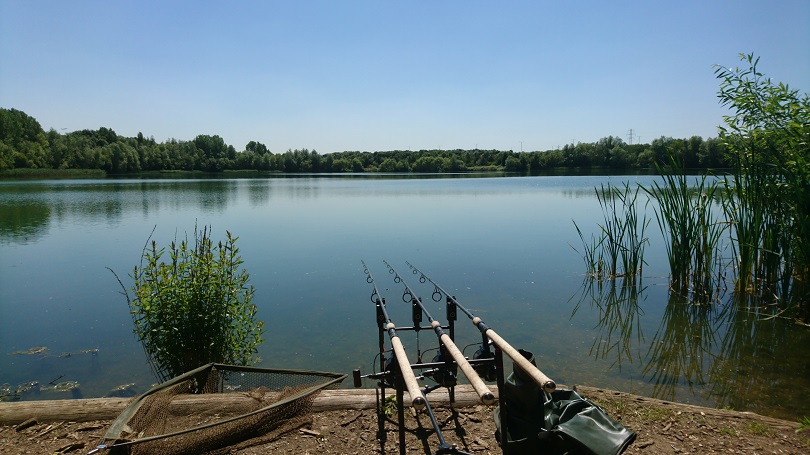 It still has the mystery of the un-known with fish repeatedly being seen but not caught.

So, lap number one was done on a gorgeous deep gravel pit with water clear enough to spot carp in a few areas. Most were simply basking in the sun. I did a second lap and then a third which saw me looking even harder by getting up a few trees looking for areas that may produce me a chance. Foolishly I had taken my floater gear out of my car before the journey down. It hadn’t even occurred to me that I could end up floater fishing here, but sure enough, it was an ideal opportunity with seeing the odd carp slurp things down off the top. I still live and learn.

After my fourth lap of the pit it was pretty obvious where I needed to be and a regular on the water also confirmed this would be a good shout, so after a torturous barrow trip during the full heat of the day I was eventually there in my swim with my gear and sweat dripping from my nose and running profusely down my face. I guess that would be the previous night’s cider escaping wherever it could. It had been a grand old night though, with great banter in excellent company as the B.C.S.G. get together events always are.

I had just got myself settled and the gear tidied and felt really content knowing I was the only one on the pit, just me against the carp when I received the first message. Rod Hutchinson had died. I went numb. 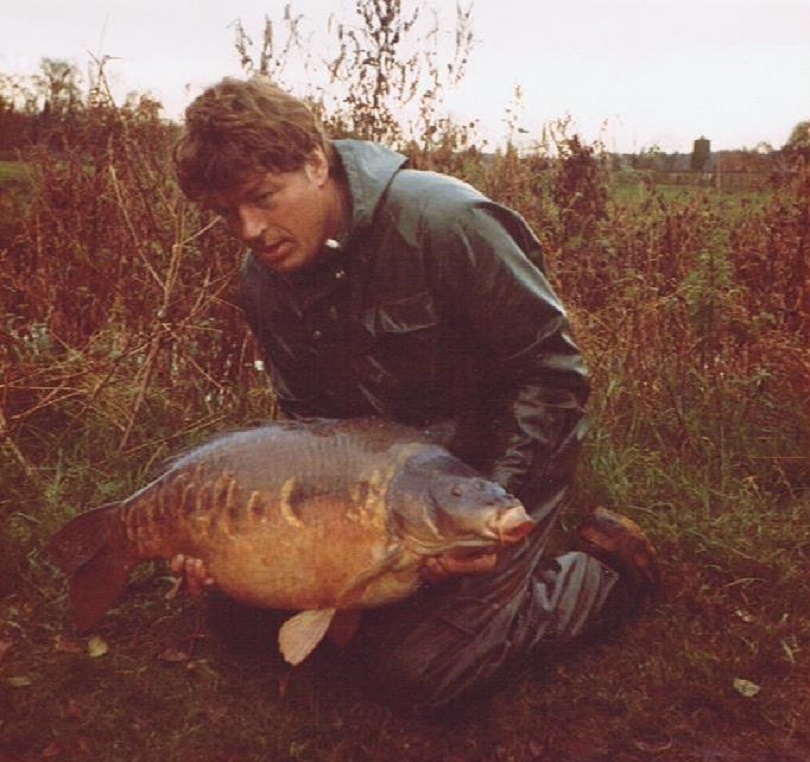 A picture my ex brother in law took of Rod with his then PB from Savay just down the road from where I sat.

I just looked at the screen; it felt like I had just been told a real close family member had died. Then the next message and the next, I really was devastated which got me thinking just how much of an influence and the power of Rod’s early written work had been. I had only met him a couple of times in person but felt like I knew him oh so well. I have a lot of mutual friends so have listened to many stories not in the books as well as reading the books and many magazine articles of course.

I was alone in the Colne Valley, a valley Rod had loved and my thought remained with him all evening. It couldn’t be helped, social media was alive and I can honestly say that by Monday I had never seen so many mentions and tributes to anyone else ever before. Such is the way Rod touched our lives, particularly my generation as well as before and after. 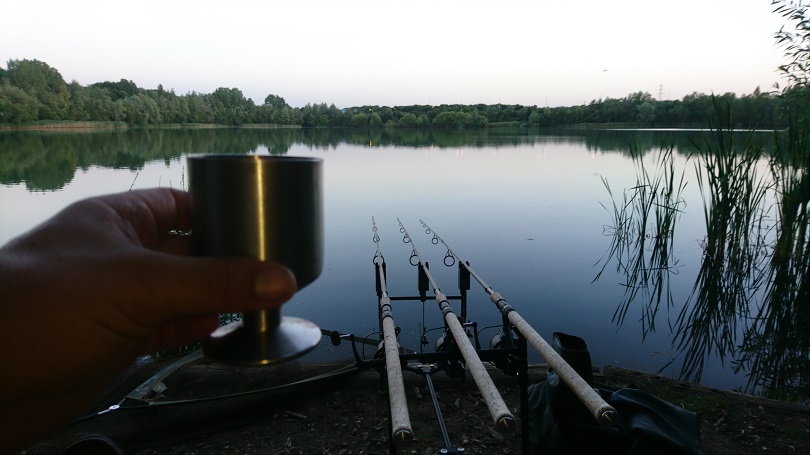 I raised my drinking vessel in honour of the great man

I raised my stainless wine goblet and toasted the legend that was Rod Hutchinson several times before the lack of sleep of the last few days caught up with me.
I woke in the early hours still sat at floor level with my back against my bed chair next to my rods.  It is quite dangerous for me to doze off as I have suffered with quite a serious case of sleep apnoea for over 30 years. Fortunately I had woken this time and was soon in bed connected to the life support machine.

5.15 am and I was out on the rods. A liner had aroused me and I’d been on it in an instant. Fortunately the indicator was dropping back down before I hit it and just then a huge head and the most impressive set of shoulders lifted out the water, a fluke sighting but a very vivid sighting that I can still see so clear in my mind’s eye now.
This was followed by a profusion of bubbles hitting the surface right on the bait. My balls of freshwater shrimp, daphnia, spices and spirulina (Spicy Spirulina) were once again working their warm water magic, just as they had done on my previous few trips. The last 3 sessions I had baited only with those in an attempt to cut out the water bird issues I’d been suffering with my normal mixed bait approach. I was fishing relatively shallow water here so only put in my little camouflaged boilies in 10 and 15 mm. They blend into the weed perfect and look as natural as a boilie can. After all, most of nature is camouflaged.

I watched the area through my binoculars for a clearer view and there were more than one fish grubbing around on the baits. Ten minutes later and I was away, the 12’ 6” rod wrapped around in a healthy curve as I started the planned walk to the left to bully it away from a potential snag. I had to give a bit though and a bit more and suddenly there was the horrible seesawing rubbing sensation coming back up the line indicating I was still connected but not in direct control. Then it was gone!

I sat on my bed feeling sorry for myself. Proud to have tricked one on my first night in awful conditions and pleased as punch the bait and rig was working on yet another water, but so frustrating when they get away. 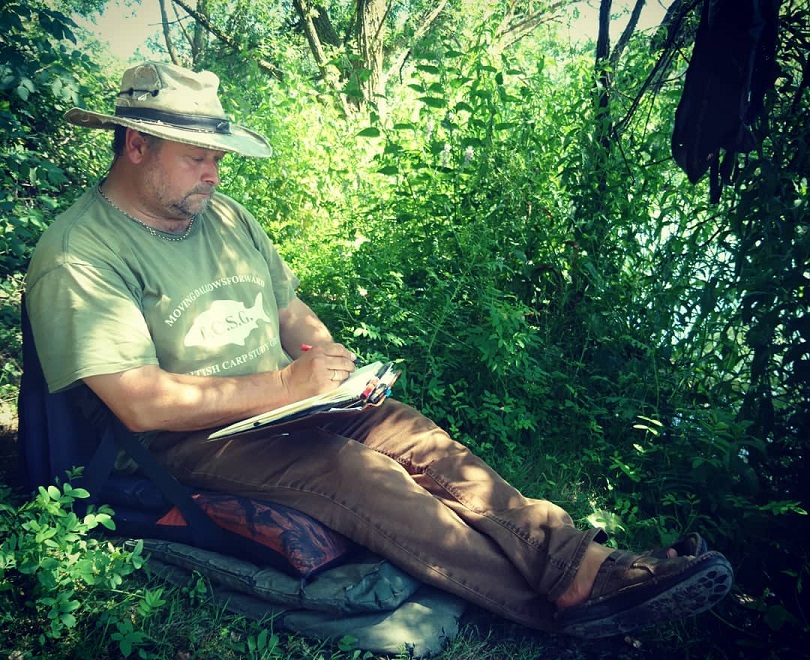 "trying to keep in the shade whilst making the usual notes".

Hey ho, I re-cast and waited a few hours before topping the bait back up then moving around the swim trying to keep in the shade whilst making the usual notes.

I still hadn’t managed to get enough sleep so had to stay another night. 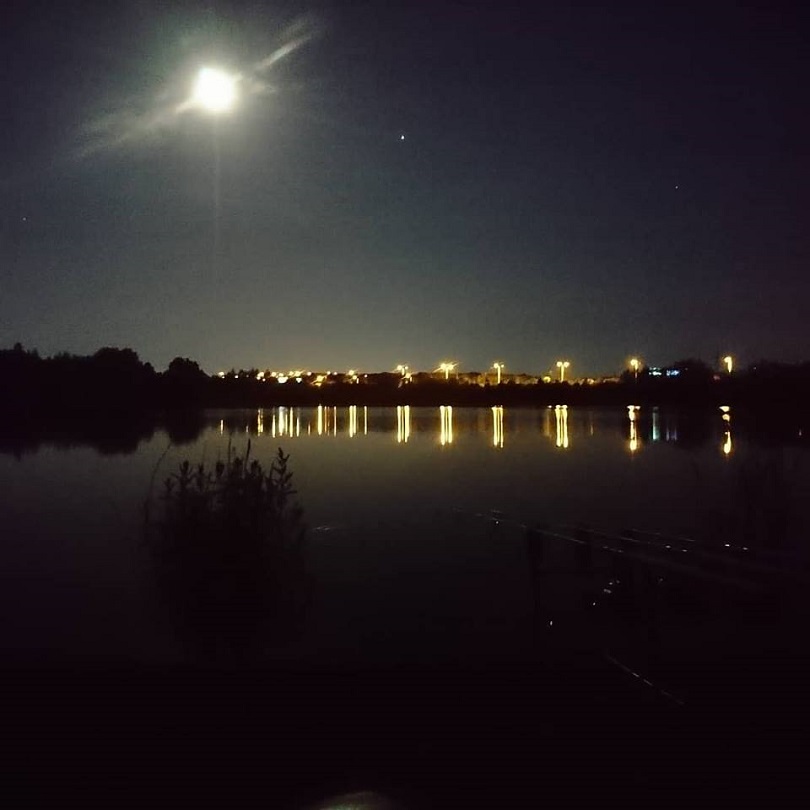 A big moon shone down on me

Tuesday morning was an almost repeat performance, a couple of bleeps at 4.40 am as fish were enjoying another breakfast of Spicy Spirulina. 4.45 And I was playing one of them. I did the same as the previous morning and this time managed to prevent it taking more line. I so wanted to land a carp from here. It had been two years since I had last wet a line here. Fortunately everything held and a Colne Valley common was scuttled into the net. Less than half the size of my last Colne valley common but it mattered not. I’d come and I ‘d succeeded and for what it is worth, the baits I had used were straight out of the bag with no tweaking or adding liquids like I generally do. 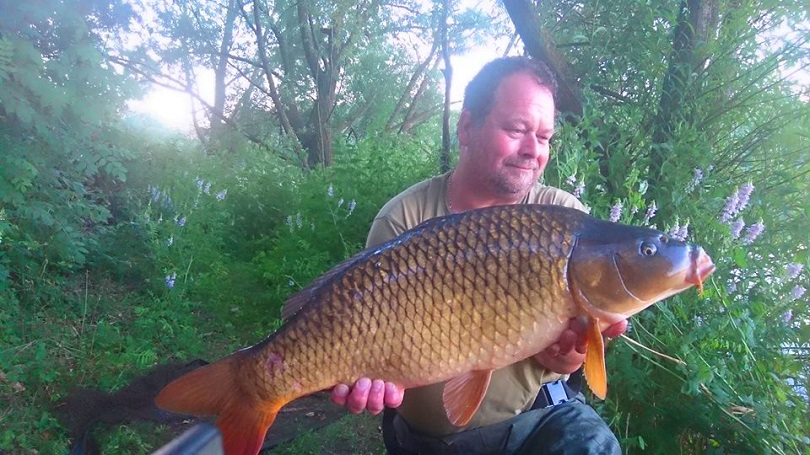 It seems to me from observations over many years that when it is scratching time such as now, when the fish aren’t really wanting to stuff themselves with food, then a bait straight out the bag and fished on the bottom is the most productive way, rather than an in your face pop up which resembles nothing safe at all. Just take the time to think for a moment, all the free bait we give them is sat on the bottom and all the safe bait they have ever eaten has been sat straight on the bottom. It does surprise me so many want their dangerous hook bait to be behaving a lot different to their other baits.

Ah well, I know what has been working for me and I will always remember where I was and what I was doing when Rod Hutchinson died. Rest in peace and paradise Sir.