I was later getting here than I had anticipated but at 8.15am after driving with two feet on the accelerator for the previous hour and a half I arrived at the gates all wound up and white knuckled from the drive, but passing through the gates the pressure was off, totally off. I was finally where I really wanted to be.

The sight that greeted me was a very rare one indeed a flat calm Grenville and already it was scorching hot. Phil Calloway was packing away in ‘3’ after losing a fish and it looked a good bet for idling a couple of days away – I must admit the big tree over it offering shade was a particularly inviting prospect with Brook my ever faithful carp dog being with me.

Paul was going out to bait a few swims for anglers with his boat so I took advantage and gave him 3kg of Ghurkka Spice split in equal amounts between 10mm, 15mm and 20mm.

The weather turned real warm and soon the carp were congregating on the surface – again a rare sighting at Grenville. A few were quite close so I tried feeding them some of Brook’s dinner much to her horror but they simply didn’t seem to realise that the floating biscuits were food.

Most of the fish were a less than a metre below the surface but due to the depths they were sat over there was no way I could use a zig – I would never land a fish and I had nothing with me to rig an adjustable zig up with.
I watched these fish for a while then suddenly thought about suspending a bait under a float. They had absolutely no reason to be scared of that. I rummaged about to find something suitable for a float and soon a Heath Robinson looking set up was sat amongst a group of carp. Amazingly they seemed oblivious to my 15lb P Line Extrusion (actual breaking strain around 20lb) over their heads and hanging amongst them. 3 times the float went but I could see it was simply carp brushing against the bait rather than taking it. Well it did look pretty silly but they weren’t spooked by it.

All too soon the scorching day came to an end and I sat there watching the sky set in the west hoping the fish wouldn’t start spawning just yet.

I awoke in the early hours to find the wind pushing in and the air much cooler – this was more like it.

I was up early and had to wait until 6am for my week-end angling ritual of listening to Fisherman’s Blues on Talk Sport radio whilst watching for signs of carp.

8am and liners have started over the baited area. At last there are fish on the bait.

11am the liners carried on for about an hour but nothing happened take wise. I have just wound in and both rods which were on the bed of bait and both are in a mess! The double Pimple Pop on one has come back with the hook in the bait.

Looks like I have been done by the fish on that one as it can’t happen on the cast.

The other rod on double 10mm bottom baits was tangled and by the way it was tangled it had happened on the cast. What a sickener swims 2, 6, 8 and 37 all produced during the period I was having the liners. In fact Max Cottis up in 6 is putting a decent catch together.

1pm and the sky is starting to cloud up. After yesterdays 28 degree centigrade which was the hottest recorded April day since 1947 things are finally looking good.

4pm – I don’t believe it. Finally hooked a fish on a 15mm Fruity Trifle Fluro pop-up fished over where the baiting of Ghurkka Spice had been or possibly still is only to lose it to a hook pull. It had felt a fair fish too simply carrying on taking line until it was off.

6pm – another chance. This time everything held and soon a very welcome mirror was sliding into the net – it was a solid looking fish of 26lb 15oz. 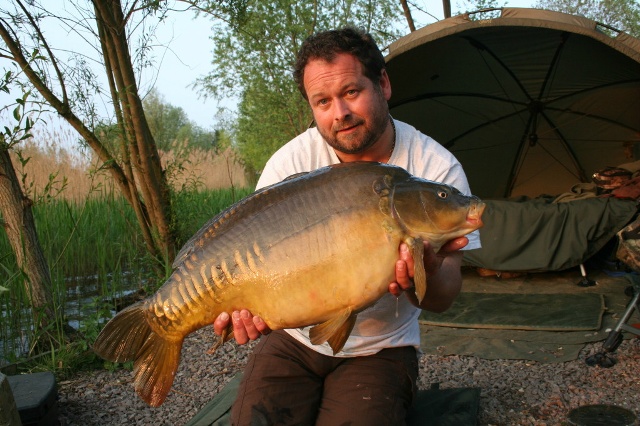 The carp that came after the loss to save a blank.

Well, a frustrating session as I should have caught more. The carp definitely moved onto my baited area and hovered for over an hour this morning. If only I had wound a rod in earlier….Then the loss in the afternoon I guess I should be satisfied with what was after all a cracking fish of 26.15 which looked lovely in the falling sunlight. The cloud hadn’t stayed long but at least the fish passed me by a second time giving me another chance.

Highlight of the day apart from the obvious capture was watching Viney play what was obviously a big fish in ‘37’ and after what seemed an age he was rewarded with hid first Grenville 40. I’m really pleased for him, it has taken a while coming, in fact young Jamie his lad beat him to it last year. I’m sure there will be plenty more to come in the future.