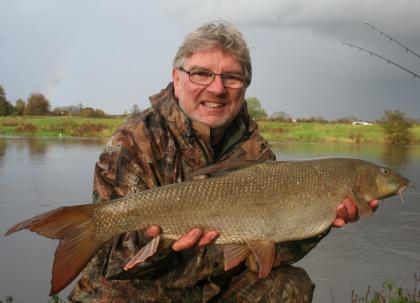 Spurred on by watching Ron Key catching doubles on the Questrami...

Wanting the Questrami to ‘speak for itself’ so to speak I put a very simply feeder mix together comprising of nothing more than Questrami, a bit of Glug and some Mixed Pellet.

First off I broke up 2 parts of boilie and added 1 part of Mixed Pellet which had been soaking up a Questrami Glug for a couple of hours. I then added the boilies to the pellet, gave them a good mix around, laid them in a sieve and then poured a kettle full of boiling water over the whole lot.

Once the water had finished dripping I transferred the scalded boilie bits and pellet into my feeder tub and was using the mix within a few hours. 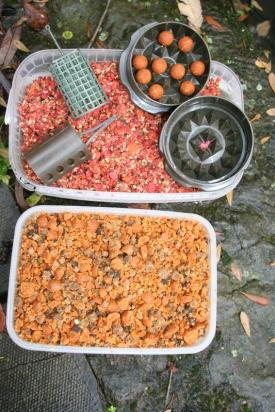 I must admit I did a mix of my usual spicy seafood as well.

I must admit I did my usual mix as well in case of emergencies (not getting a bite) but ended up not even touching my ‘dead cert’ well proven mix of Rahja Spice,Special Crab and Absolute Seafood blended together with other bits. 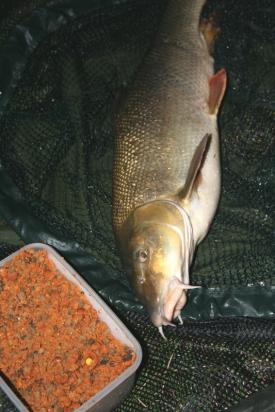 You can see how quickly the first one came by how little bait was used.

Off I trundled down the river and didn’t have to wait long for the first barbel to take a liking to the Questrami mix.

It was a lovely late afternoon autumn scene that entertained me. I was treated to the evening dance of the starlings like one huge cloak performing in the air making many spectacular and elaborate moves, before finally coming to roost in the trees, over the river. How blessed was I? For there was no-one else around to view this spectacle that had been performed in front of me.

The crows turned up next as the sky turned from orange to red before fading to grey. All I could hear were the geese in the field I crossed who spooked and took off for the field on the far side of the river. As darkness envelopes all, the odd crow caw and some late singing songbirds were saying goodbye to another Autumn sun.

Far in the distance was the faint hum of tyres on tarmac in that other world I so love to escape. They were far away from where I sat, contentedly watching my rod tip. 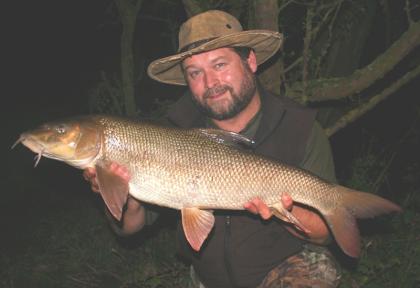 Then it happened, suddenly the rod was in its full curve and line was stripped from my reel as I held onto a fish pulling hard deep down in the swollen river. The fight was nothing short of biblical but I won’t go into every last move. I really was starting to feel a tad nervous, nervous of the new hooks I had decided to try and nervous that I really thought I was playing an absolute monster. Eventually though the fish was in the upper layers and after 3 big last minute surges which moved an impressive amount of water the barbel was finally beat.

At 12.12 it was a pleasing start on the Questrami a bait I had developed for carp.The water had been rising whilst I had been fishing and the following day was rather difficult to say the least with all manner of rubbish constantly hitting the lines. I did manage to catch chub though. Fortunately the levels peaked overnight and I had the Sunday afternoon free to grab another few hours. This time I chose a stretch I had not visited for over 12 months and looked as though it hadn’t been fished at all. This time I had the confidence to only use the simple Questrami Mix I had put together the day before and once again the first fish wasn’t long in coming at all. 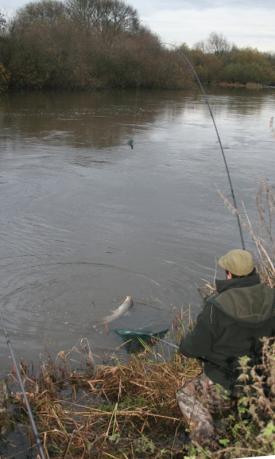 So nice to be getting daylight action

So, it looks as though I could have a rather special new barbel bait as well as an outstanding carp bait. The tests will continue, but first time trials in mid November look more than promising.