Home Blogs Sorting the Bait as we Approach Winter

Now this really isn't an issue to me as I have several baits which all have an incredibly long track record in their attractiveness to cold water carp, which due the carps cold blooded make up giving them a much reduced metabolism brought upon by the cooling water.

It really does bemuse me why some anglers make life difficult for themselves by stubbornly continuing to use the same bait with little thought as to whether that bait is actually as attractive to a carp in the winter as it perhaps was in the summer.

More importantly this selfish behaviour can also stop so many other anglers enjoying sport, for a lot of the highly effective summer baits, can become almost impossible to digest winter baits.

Put in simple terms, the carp will eat them if they stumble across them (some baits give out little in the way of food signals in the cold months) but once they have eaten them their bodies struggle to cope with and to digest them so the carp remain full with less need to feed again for what can be a considerable period of time. This actually moves a stage further and can become very harmful to the fish, eventually making them ill and again less likely to want to feed with bait that they struggle to digest in the colder months being stuck inside them.

So, for my own angling, the mixed pellet that has been diluted with Maximum Action Pellets will now become just Maximum Action Pellet mixed 50/50 with Micro Feed, a touch of Naked Hemp and a bit of broken (not crushed) boilie. This will form my small stick mixes and a tub of glug will be added to the bait bag to ring the changes and give the stick mix a quick dunk before casting. 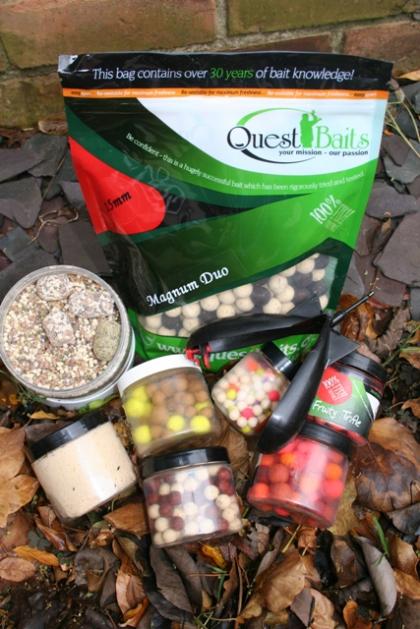 The containers are scuffed because I have used the same tried and tested for years.

Boilie wise I will be carrying just Magnum White/Magnum Duo as my main bait with a selection of alternative hook baits. These will be the baits that have also caught me so many cold water fish over the years and will be Fruity Trifle (I have caught more winter carp on this over the years than any other bait), Rahja Spice and Ghurkka Spice (several sizes and a mix of colour in each tub). I have found so many times in the past that a re-cast with something totally different on the hair will often lead to a much quicker take.

Baiting wise, I will be keeping it in small amounts definitely preferring the little and often approach rather than the commonly seen, dump it in and sit on it. Most of this will be done with a Mini Spomb to beat the gulls.

So, there you have it. No secrets that is exactly what I will be carrying. Then again I might just blend a few Chilli Chocolate boilies in with the Magnum’s and of course I almost forgot to mention the essential tub of paste. I use this in mesh bags as well as giving baits a paste wrap at times.

If in doubt with your bait, take it out of your bag. Feeding wrong at this time of the year can affect your angling as well as that of others for weeks to come. You don’t need much bait so now could be the time to try something with a proven cold water track record. All bait is cheap when you aren't needing to pile it in.