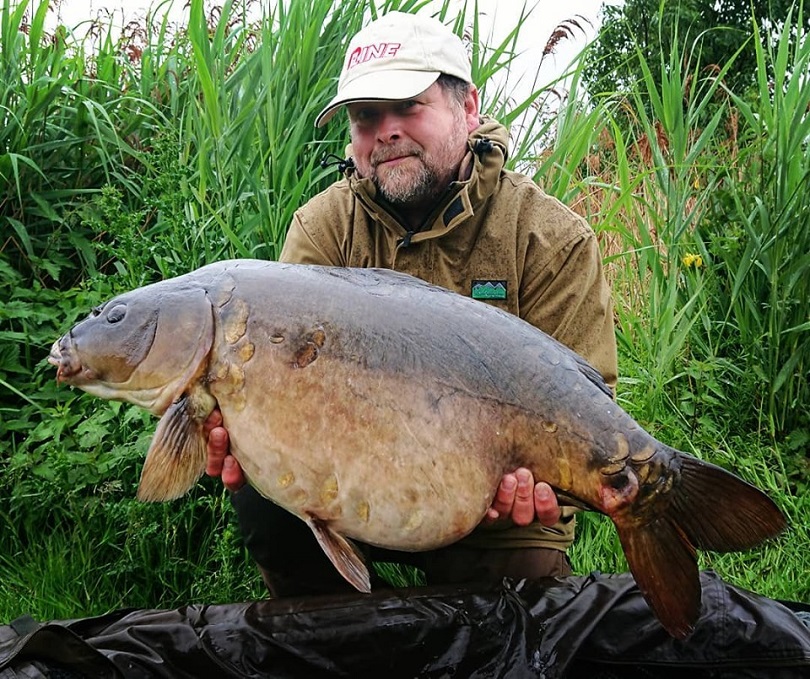 Saturday I had landed a nice mirror during the morning whilst conditions appeared absolutely spot on with a big low which had moved in dropping the air pressure fast, whilst the wind blew strongly and boy did it rain. These were the conditions I had hoped for to get the fish down in the 19 feet of water I was fishing. 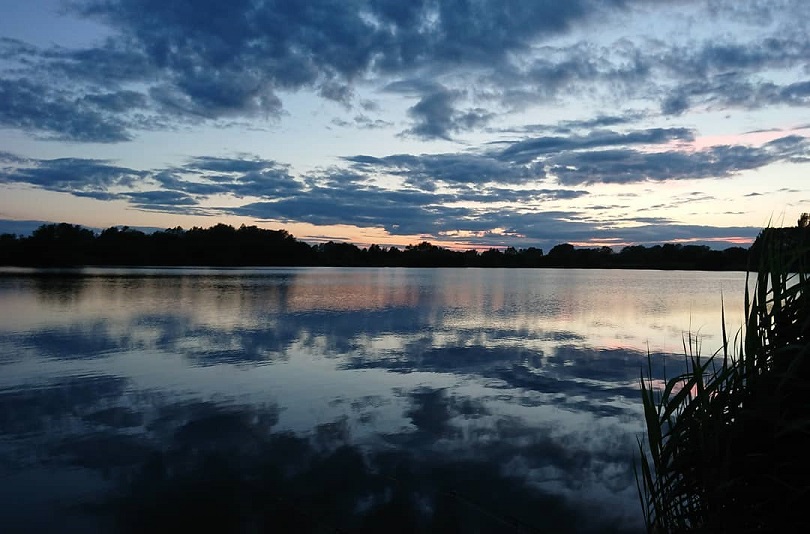 It turned dark and I struggled to believe I had not tempted another fish to my area where I had been feeding the natural critters, the snails and the caddis etcetera with the baits I had put together to do just this and maximise attraction on the lake bed putting movement into the equation as well as the other benefits of encouraging natural food to feed. 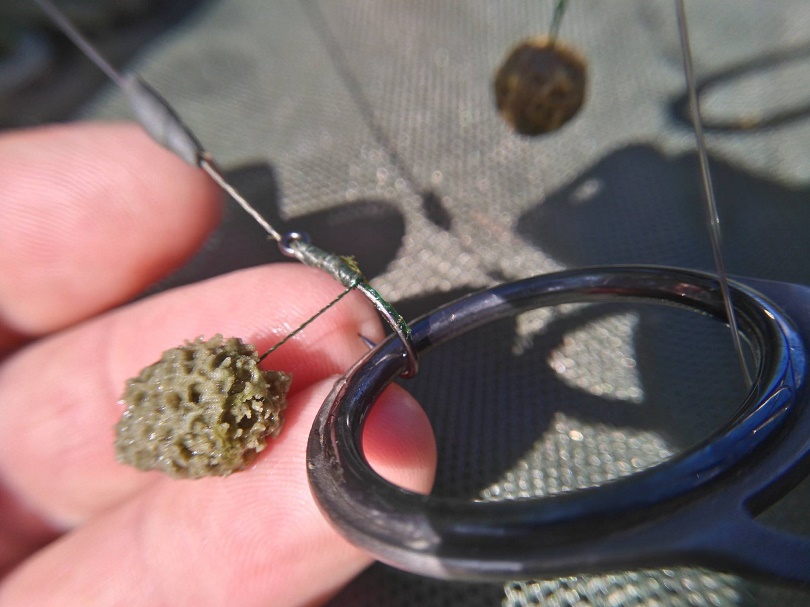 However, my swim had remained un-disturbed since my capture in the morning and with various other anglers packing up and others turning up, there had been plenty of leads crashing in around the lake, which was all good for me pushing the fish to the quieter areas (my swim) around the lake.

Had the critters cleared what I had put out?

Only the previous week I had been amazed after dropping 3 x 15 mm  Spirulina, daphnia and freshwater shrimp based baits (Spicy Spirulina) in the edge, only to see two snails of a similar size to the bait both firmly attached and feeding on each of two baits and the third actually had 3 three snails jostling for an easy feast gorging on it and that was all within probably twenty  minutes of dropping them in the edge where I could observe and show someone else who I had been chatting to about what I had been doing. 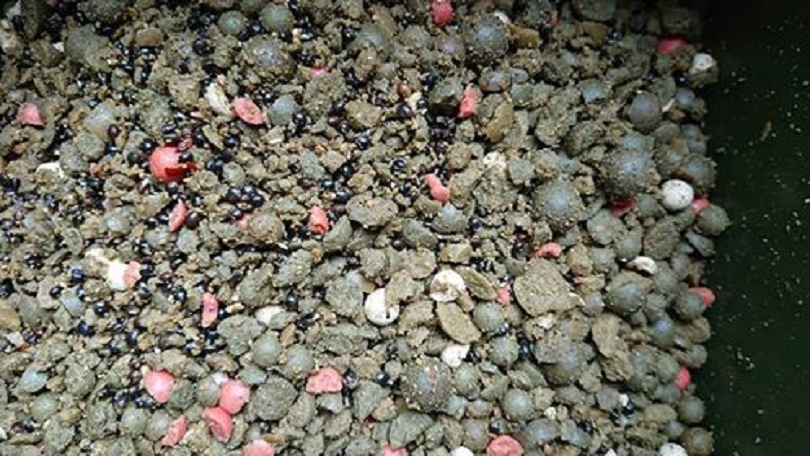 I guess it was around 11.30 pm and I was unsettled in my mind, I should have had more action. I was in little doubt that I’d probably had pick-ups like we all do, so much more often than we like to admit, the fish had probably ‘done me’ as anglers like to say.

I reached for the Spomb rod and started an after dark topping up. If the critters had been feeding and the carp had fed and got away with it, then they should really be happy to remain there. So, when I should have been turning in for the night in order to be back up at first light, I was back out in the dark, re-preparing the swim.

Just five casts with the Midi Spomb and just about to sail the sixth out into the dark my middle rod was away. The fish had obviously remained there then after all and the fresh cloud of bait dropping through the water column, breathing in the dust particles falling, had triggered them into another feed.

The fish put up a real good account for itself and after a while a lovely common was steered into the net. That would do me to send me off for a decent satisfied night’s sleep. 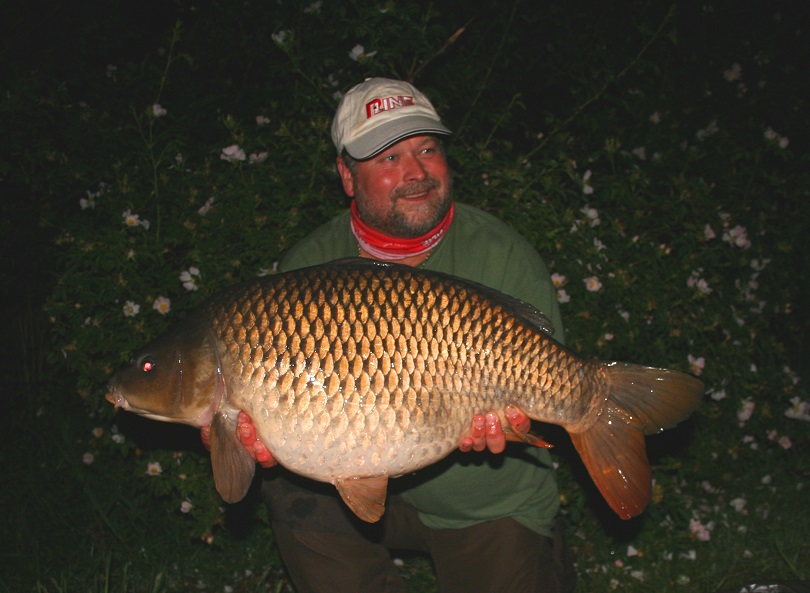 I was just watching the needle on the scales spinning past 25 lb when the other rod on the spot suddenly needed my attention too. I quickly zipped the carp into the weigh sling, lowered it into the edge where thankfully there was a good depth of water and went into battle with the second fish, whilst keeping an eye on the first in the sling. Another powerful fish was tearing around out in the dark depths and I’d only made five casts with the Spomb after hours of inactivity. Okay, it is at a time they don’t always get fed fresh bait, but it had obviously triggered them into another feed. They had obviously enjoyed what they had tasted. 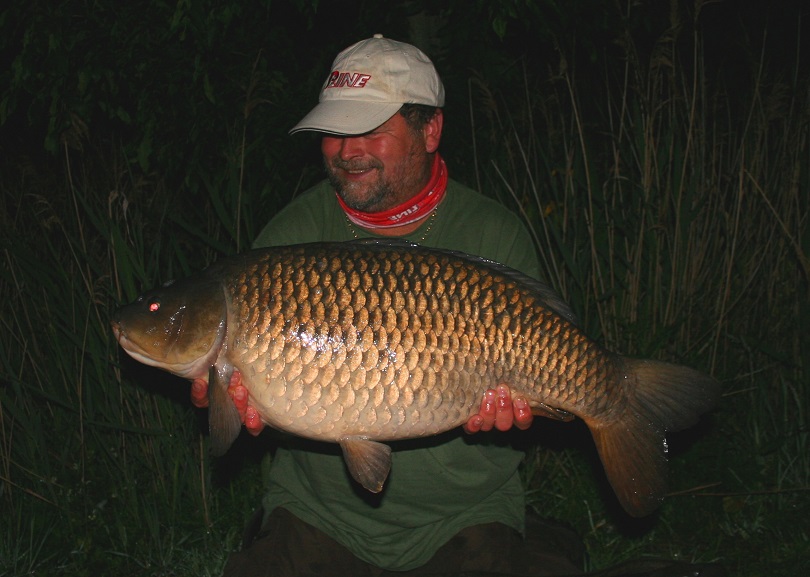 In the net it looked identical in size to the previous common I had just landed and just as I was breaking the arms of the landing net down to slip the mat under it, the remaining rod chirped into life. Total bedlam, one carp in the sling, one in the net and the third rod needing attention as well, I must try the mid night topping up of bait more often. Fortunately I usually fish with two landing nets and glad I did on this occasion, for yet another nice common of a very similar size but deeper in body, slipped into the final un-used net. 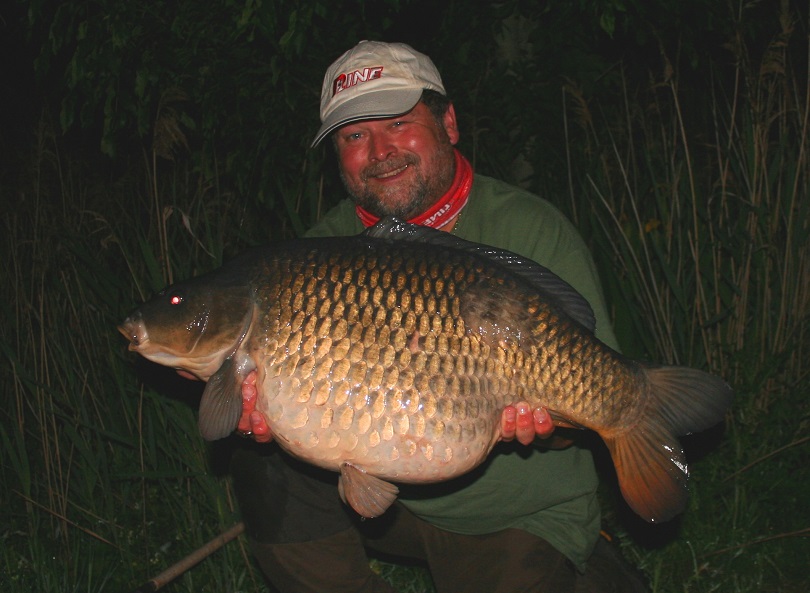 Self takes done individually and I was left to sort out the carnage in my swim then once again topped the area up with food for both the critters and the carp.

I love this carp fishing lark, where hours of inactivity can be turned around with just that little bit more effort. I slept well, a deep contented sleep.