Spicy Spirulina is a green’ish brown, totally natural bait that the carp’s natural food likes to eat, as much as the carp do. There are only natural food sources in this bait. The three main smells and tastes that you will notice are spirulina, daphnia, and freshwater shrimp, plus carefully selected human grade spices. You will find no artificial chemical type flavours in this bait at all. The smells and tastes are the real deal.

For the past three years I have been spending quite a lot of time fishing a pit that is incredibly rich, absolutely teeming with natural food. In fact I did one of the Carpology ‘Below the Surface’ features there and Rob Hughes, the diver, commented on just how rich it was in all sorts of snails, caddis, daphnia and a whole host of other things that didn’t sink into my brain at the time. In fact the masses of daphnia were actually larger than he had seen anywhere else and he went back in to picture them for his own use.

Fortunately I have managed to hold my head up high with the fish I have caught there although it is fair to say a few appear to have struggled. Now Rob commented upon how many underwater critters I had attracted to my baits and each time I would in I found little holes where the various caddis and other beasties had been feasting on my hook baits.

Two years ago I caught really well but things weren’t quite right. I had caught more than others but a particular strain of carp which actually represented around 50 % of the stock hardly turned up to me or anyone else for that matter, just odd ones were slipping up. Now this water has at least four totally different strains of carp within its depths. So to have had a really good season on a boilie that 50% of the carp didn’t appear to be too bothered about, made it a exceptional boilie for the 50% that did, I guess.

Last season though this was playing on my mind, I wanted to catch all the strains so changed my bait. It seemed obvious to me that with such an abundance of natural food the carp that weren’t getting caught were simply hunting out the naturals in preference to our man made offerings. I decided the way forward would be to use a bait that the snails and other critters would be attracted to which in turn should attract a few carp. After years of messing around with natural spices I knew a couple that the bugs seemed to like and these being in Rahja Spice I went with that.

I caught from the off and after 20 fish I found I was catching as many of the strain that I hadn’t been catching as I was of the ones I’d been catching anyway, so happy days. The attracting the natural life was working so I moved forward with this and started to add other things to my baiting situations trying to find other ingredients that would attract the naturals. Things moved forward with a lot of help from the naturals in my pool at home. I’m really fortunate that I have a totally natural spring fed pool in my garden that has all the usual little critters found in any other natural pool so daily tests can be done to see what the carp are enjoying as well as what the natural invertebrates are attracted to.

Bringing it all together

It seemed like the obvious thing to do to make a different boilie from scratch, rather than try and add the extras to the Rahja Spice. For although this was working, it was a lot of messing around and the way I was doing things I was limited to only really being able to introduce my bait via a Spomb and the actual ingredients attracting the natural food was in the area of the boilie rather than in the boilie. I caught well enough but knew I could probably move things a stage further so the critters were totally on the bait rather than just around it with the odd ones feasting on their favourite bits of the Rahja Spice.

So, Spicy Spirulina was born. 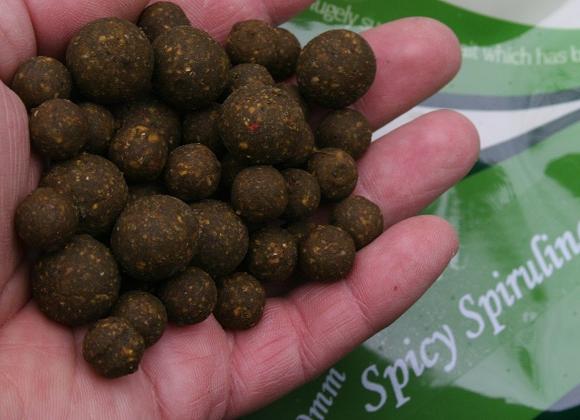