Originally I used it as a method mix presenting my own little spawn bed in the lake. It came about after a couple of frustrating years where the carp on the pit I was fishing at the time would get preoccupied on bream spawn for a few weeks each year. This was my copy of spawn but with added colour and extra attraction.

To allow you to use it as a method mix or indeed to form catapult friendly balls you will first need to damp the Micro Feed down with water. I do nothing more than dip an empty bucket in the lake then pour the Micro Feed into the bucket of water so that the Micro Feed isn’t quite covered. Leave it to soak for a few seconds then take a handful and squeeze off the excess water. Work the ball between your hands a few times squeezing every last bit of liquid out and you will find it holds together in a ball which can then be catapulted or used as a method mix. Although it looks like it has turned to a ball of paste, once on the bottom it will break apart and return to it's spawn like appearance. Drop a bit in the edge and see for yourself. Even after a couple of days in the water you will still have tiny separate spawn type pieces on the lake bed – that is if the fish haven’t visited your swim of course!

These are my two preferred ways of using the Micro Feed but already we are getting lots of different feedback from anglers doing different things with it such as soaking other liquid foods into it etc. So, although I originally made this to help my catches at spawning times it has proven to be a much more versatile bait, catching carp during every month of the year.

Come on, be honest with yourself, does your bait and baiting method consistently hold its own in the winter against others you could be using?
If you want a very well proven winter edge on the guy in the next swim try crumbing a Magnum White boilie leaving some larger bits, add a pinch of Micro Feed into a PVA mesh stick with a trimmed down Magnum White bottom bait on the hair and you are away.
The crushed bits of boilie gives a big instant flavour and moving visual attraction, the broken bits of boilie follows on with a longer flavour leak out rate and the Micro Feed carries this on a stage further. A massive visual stimulation along with a prolonged flavour release without over feeding them. 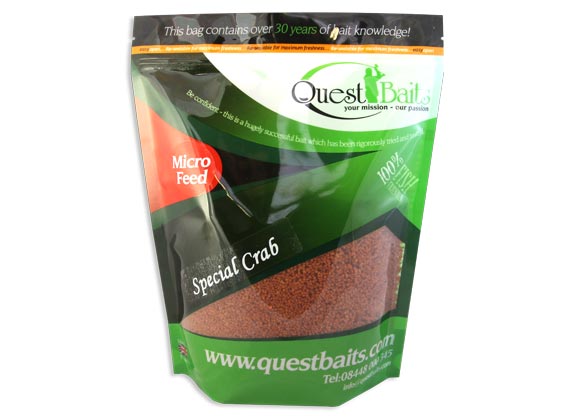