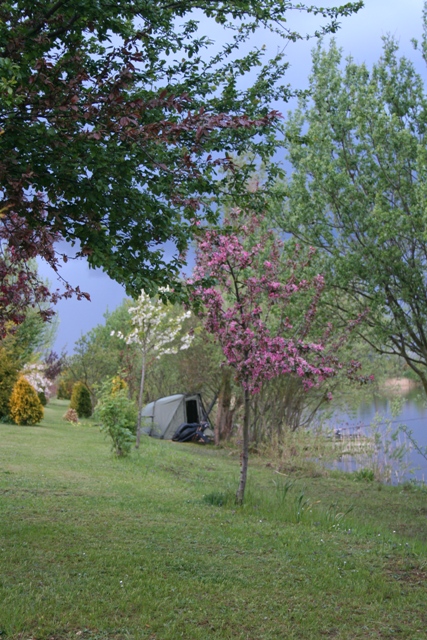 I chose the deepest water

Friday I started work particularly early to hopefully clear my desk and allow myself an early escape. The journey went without hitch and a hour and a half after leaving home I was driving along the track to the car park. My heart sank, I had arrived early but it looked as though everyone else had the same idea as me having arrived earlier still. There were over 15 anglers already pitched up.

I looked where each person was set up and the two swims I fancied from what was left were either 25 as there was plenty of space either side still, or 31 simply because I’d had the suspicion the fish were holding up in the deeper water and with a drop in air pressure more would do too.

I cast the marker into 25 and two of the spots that had been kind to me in the past appeared to be weeded over so they weren’t being fed on or visited much. With other anglers arriving by the minute I dropped into 31 which put me on the end of a line of fellow B.C.S.G. members Phil Calloway and Paul Miller. Phil had received action earlier in the day and although his swim was only 2 away from the one I chose the swims are well spread so as to not interfere with anyone else’s water. At least I knew there were or had been fish in the vague area. In fact both Paul and Phil had seen a decent show of fish at first light.

I lit the chip pan and left scampi and chips to get on with cooking themselves whilst I finished preparing the traps. 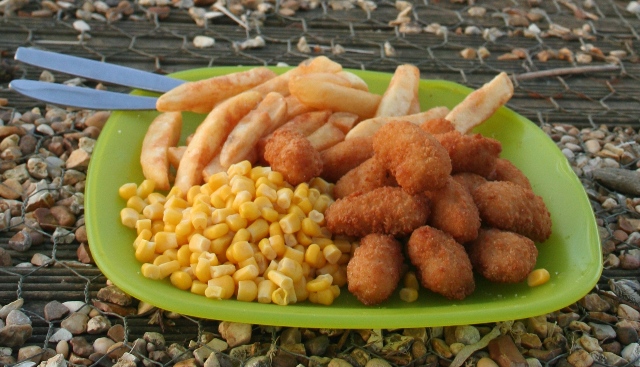 I left the Scampi and chips to cook themselves

I decided to fish hook baits only the first night on my middle and right hand rods as the spots I had caught from before were a little too far out with the awkward wind for any half accurate baiting. My left hand rod I kept within catapult distance and that had a scattering of 10, 15 and 20mm Magnum White’s over it. The more I am using the white baits the more I am spreading the baiting working on there being more chance of more fish noticing a few in the clear water and then hunting more out. It is working well anyway. Rather than the relatively bright baits spooking fish it seems to be having the opposite affect. The Grenville fish spend so much time under the birds that I am sure the colour white which will resemble bird droppings from both ends that carp eat anyway are probably acting as a natural attractor/food signal. 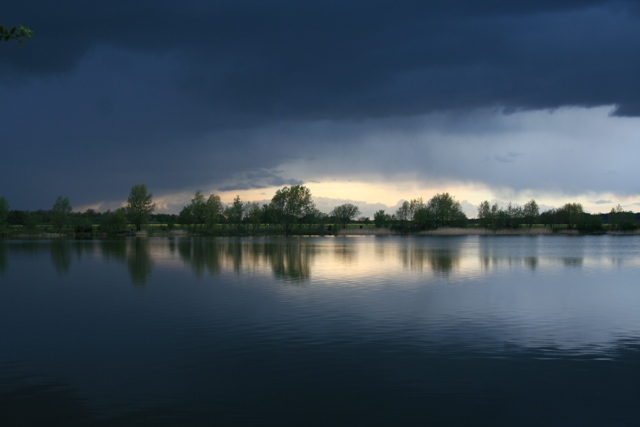 I took advantage of a slight change in the wind between storms.

Saturday dawned with me fish less although both Paul and Phil had caught again and both were over bait at range. So, I took advantage of a slight change in the wind direction and Spombed a loose carpet of bait at range and dropped one hook bait right amongst it and another as far as I could put it past the bait. I had also let fly with the soon to be released Midi Spomb a few times so there would be a scattering of bait out there too. With baiting in over 30ft of water you know you are going to be getting a decent spread anyway.

Rigs were my usual combi rigs with 2 on pop-ups being fished reverse combi style (stiff part at the hook end) and the bottom bait on a conventional combi rig. 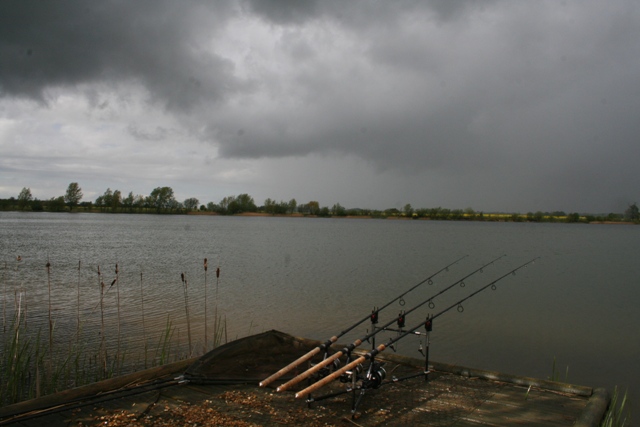 Saturday threw all types of weather at us.

Saturday threw all sorts of weather at us with the wind swinging and storms coming and going, we even had a short burst of hail at one stage! It really was a moody type of day.

I turned in early Saturday after quite a tasty Paella I had cooked and looked forward to a hopeful first light feeding spree by the carp. At least I was feeding well. 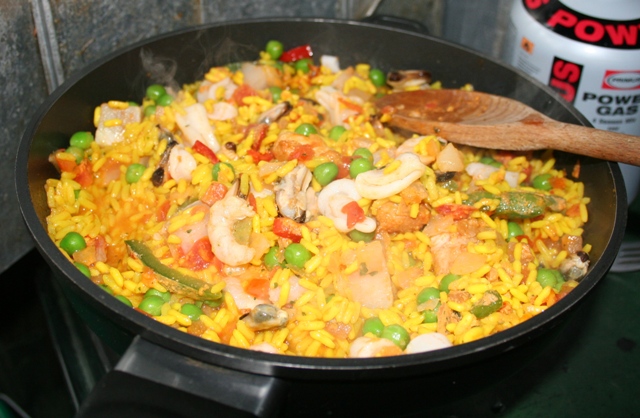 At least I was feeding well.

I remained in bed until 6am then leant over to turn the radio on to listen to Fisherman’s Blues on Talksport. I was thinking about getting my legs out of the cosy bag and putting the kettle on when suddenly the rod tip on the baited spot at range whipped around, the line pulled out of the clip and I was into what was so obviously a good fish from the moment I hooked it. 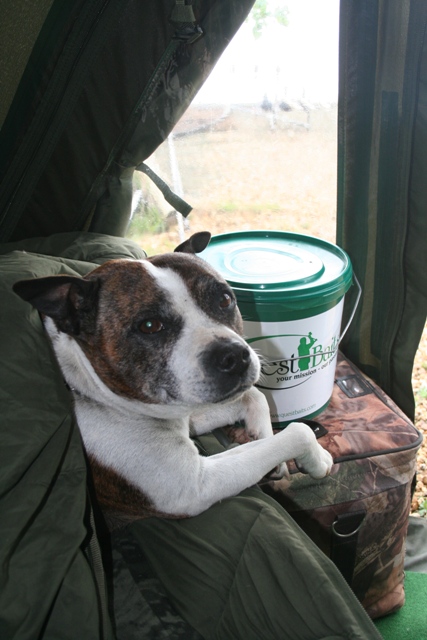 Brook didn't want to get up!

Out there in 30 plus foot of water whatever I had hooked seemed intent on putting as much distance between itself and where the pull was coming from as it could. Lots of line left the spool but in that steady speed and very little in the way of head shaking I always associate with the larger fish.

We have all read countless accounts of epic battles so I will skip all of that now and simply say ‘eventually’ my opponent was coming ever so slowly, agonisingly slowly towards the net cord. I could see in the gin clear water it was a good fish and that tiny hook I prayed would stay in.

Paul Miller had joined me and wielded the net and did a superb clean netting job for me. We had a little debate on our estimations of the size of it in the net. I’m pleased to say I was a little closer on my guestimation but when I lifted the fish from the water and onto the mat Paul was quickly agreeing that the fish had grown from his initial guess. The scales as usual reduced this carp to simple numbers but at 37.06 they were numbers I could live with despite it being down in weight since its previous capture. I didn’t care it was a good fish on a week-end that had only seen 3 of the 20 other anglers catch. 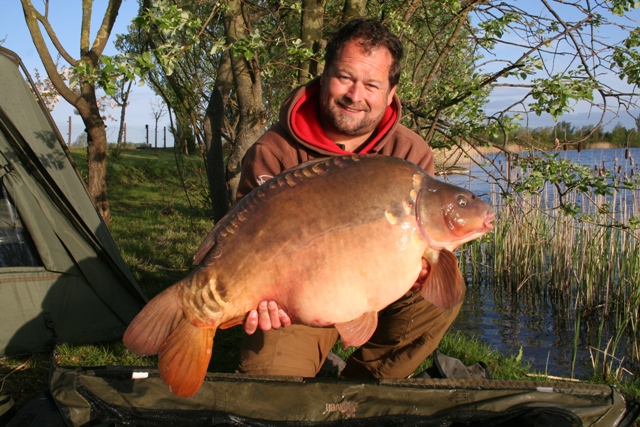 My reward, deep water success on the Magnum White.

My next move surprised a few. I didn’t re-cast but instead moved up 2 swims as I had a feeling the fish would be moving that way. I had just got my third rod cast when a double Magnum White Pimple Pop (6-8mm pop-ups) was picked up by another good fish. I played the fish back  from range but unfortunately it started to kite and ended up in the margin to my right and managed to get the line stuck on a stock pond pipe being suspended out of the silt. For a further 10 minutes I was able to gain line and the fish was able to take line but I couldn’t get the line free. Eventually with the fish tired and swirling on the surface the hook pulled free. I felt so frustrated by this. The fish was beat but the only obvious snag in the swim and the fish had got the line stuck on it without it actually wanting to head for it itself.

Hey ho, you win some you lose some and I could hardly bee too upset having landed a 37lb fish only an hour or so earlier. At least I know my baits and my rigs don’t need tweaking.