Home Blogs Extracts from my May 2016 Diary 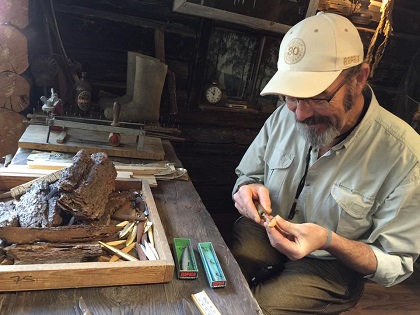 Friday 29th April 2016
Still feeling very numb over Jan’s passing I needed to escape to gather my thoughts. Any sort of work had been so difficult and by 1 pm Friday I simply had to lock my office and turn my back on the world, to escape, out of the way and gather my thoughts.

I arrived at the gate to my chosen escape only to find the lock missing. We share the gate with others, their lock was there but ours was gone. I couldn’t get in. Back in the Land Rover I drove to another entrance and fortunately this gate was already open so I was able to enter from the far side to where I’d intended to fish after close weather watching all week. Unfortunately this was going to mean a mammoth wheel barrowing job. I got out and started to load the barrow as a huge storm started to brew and the wind gathered momentum. Suddenly I was being pelted by ice balls from the sky. Jan was having a laugh.

I sat back in the Land Rover and let the storm pass. Finally back out I started the long trudge around the lake and what a hike it was. Probably the longest barrow job I have ever made and laden down with full ‘not quite out of winter gear’ I really knew I was pushing it through waterlogged scrub land.

¾ to my swim and horror of horrors – a puncture! I looked to the sky, hands on hips and actually found myself saying…

Writing those words a day later and it seems odd, totally out of character for me, but I truly felt Jan was with me. This was my private farewell session, totally out of the way of civilisation in a place I never brought him but a place he would have loved, with or without the rods.

I stopped using rucksacks and carryalls several years ago, preferring solid waterproof boxes for barrow work, so by the time I was in my chosen swim I was a physical wreck, totally exhausted after carrying heavy boxes with no straps. 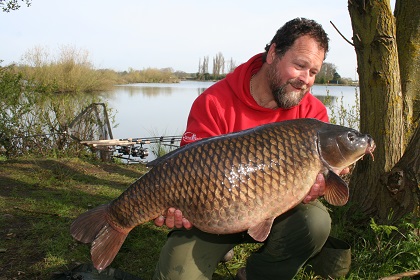 My largest common so far from the water with Jan smiling down.

I won’t go through a blow by blow account of the fishing, but 8 carp including my largest common from the venue found my beds of Rahja Spice and my Rahja Spice pop-ups that week-end. Never have I or anyone else landed that amount of fish there in a couple of days angling. Jan may have been having a laugh at the start of the trip but he sure was there helping me during it. 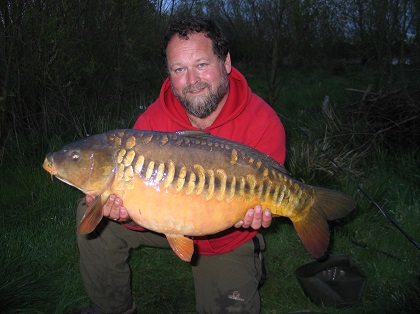 Thanks for the memories Mucker

Thanks ‘Mucker’, if you see Brook on your travels, please give her a hug for me and tell her I’ll be back with you both one day.

Why the red clothing? Well, it was Jan’s weekend.

Friday May 6th 2016
Land Rover loaded, bonnet pointed south and off to  Belgium for the week via ‘Castle Spomb’, the home of Mr and Mrs Spomb, Bryan and Judith for a bit of a Free Spirit Fishing social. Originally I was travelling with Free Spirit boss Simeon, but on the Wednesday, he had to pull out due to a work overload. Several other members of the team had dropped out as well and feeling really guilty towards Peter and John who had organised the trip, I felt terrible saying I would probably have to drop out, but then Judith stepped in and saved the day and said they could squeeze me in the Spomb mobile. 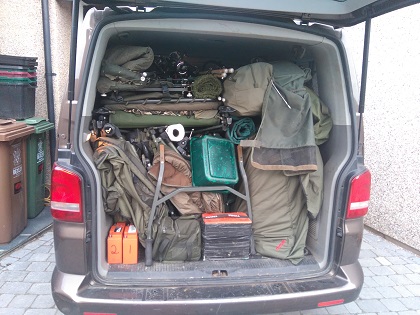 The Spomb mobile was rather full

Another session I have written about elsewhere so will have to keep it brief here. It was a session that started off with me not particularly revved up for it, but one that I loved once there. 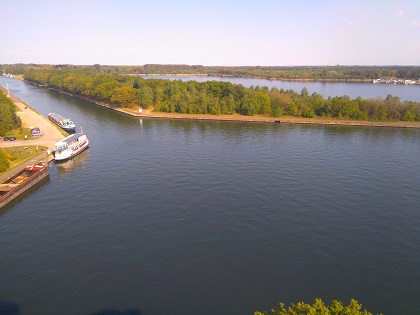 Water, water everywhere and all of it connected gave a big fish finding challenge.

There were 9 of us scattered up and down the V Channel and the Kempisch Canal a few miles apart. The fishing was tough, talking to some of the locals and they were awaiting their first fish of the year.

I settled upon the Kempisch Canal which gave me a lot of new challenges.

Out of the 9 of us (all very accomplished anglers) only 4 of us caught, so naturally I was delighted and proud that 2 of the wild Kempisch commons took a liking to my Rahja Spice in the first 24 hours. 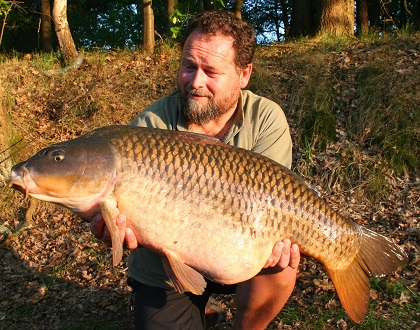 The way it had fought I was expecting a fish twice the size! 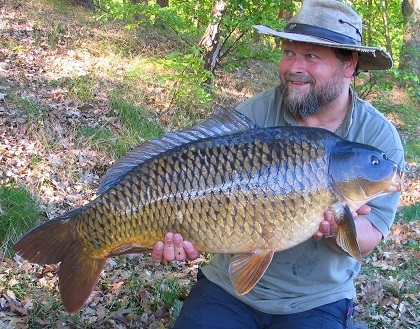 Wild? It was livid when I stuck my hook in it - what a scrap!

I then took advice and moved, which turned out to be not the best decision I could have made, but we all live and learn.

Thursday 19th May 2016
I have been a PB products user since 2012 after John Caeyers first showed me the incredible ‘Hit and Run System’ and their hooks whilst I was angling in France.

PB Products have been a problem to get hold of here in the U.K. for the last couple of years so naturally I have not mentioned them a lot as most wouldn’t want to mess around ordering from the Netherlands as I had been doing, but now with there being proper stocks over here and an official stockist at last, I agreed to get behind them and promote what I have used for a few years now.

I had been asked if I could spare them a couple of days for filming purposes over on ‘The Sitch’. Now what a venue that is – truly stunning! I had fished Weston Park close by and this was very similar, surrounded by everything I like. 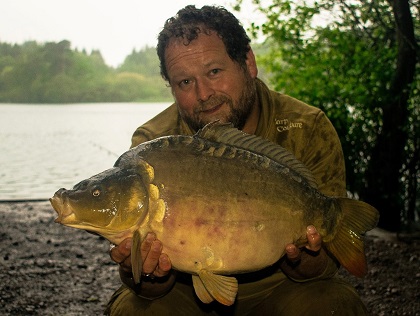 Regardless of the size I love catching my first fish from a new venue.

We got the filming out of the way and then I managed to bank myself a fish there on double Fruity Trifle Pimple. Pops, which have always been my last resort, get out of jail bait.

Saturday 21st May 2016
From the Sitch I drove over to one of my Syndicate waters which was only 20 miles or so away. Just one other angler on 20 odd acres of water and he hooked a stupendous looking black common as I arrived in his swim. 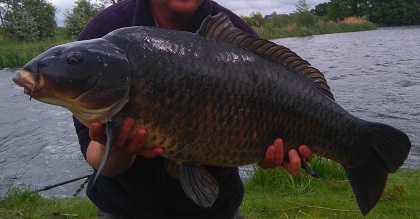 One day I'd love to be sat behind that one.

He was chuffed to bits with this and a couple of others he’d had but also mourning the loss a what had felt a good fish prior to the common. Well, you can’t win them all and it’s the losses that keep the fights exciting, never knowing if the hook will stay in place.

I eventually set myself up as far away from Dave as I could – after all, what’s the point in crowding someone out who is catching? I do wish a few others would adopt a similar policy and let those enjoying success; continue to enjoy success without trying to knuckle in on it themselves. 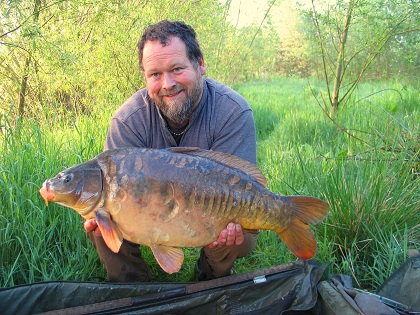 A lovely and wild pit, with gorgeous looking carp

I managed to keep my 100% success rate going with a lovely looking scaly mirror which had again fallen to a small bed of Rahja Spice, so I was able to leave after a quick overnighter more than pleased with myself.

Tuesday May 24th 2016
After yet another email asking me what I mean by giving my baits a drink, I grabbed the video camera and did a quick bit of self-filming of my bait being prepared for this coming week-end. http://www.questbaits.com/videos/baiting-tips/giving-your-boilies-a-drink-before-use/

Friday May 27th 2016 – Bank Holiday week-end
Over to Dallow’s to hopefully avoid the bank holiday crowds. It is good of the government to give us these angling holidays on the bank when a lot of the nation doesn’t even fish.

I arrived to find just one other angler set up so did a lap of water, found a few fish in an area I’d not fished for a couple of years and so settled myself in. Unfortunately these fish were on the end of a wind so all a little bit obvious really and before I knew it I had anglers either side. Not really a problem as I still had my own bit of water, but I’m sure the extra presence and extra leads splashing in put those fish on edge. They never spooked away and stayed for a couple of days but I’m sure they knew they were being angled for. 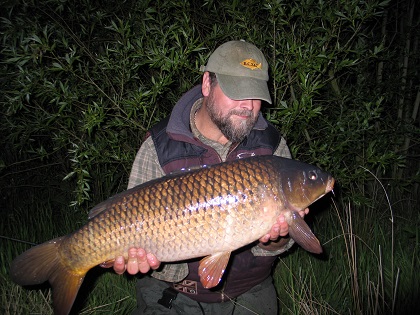 A long lean fighting machine was to be my last fish of the month.

I did manage to catch a long lean fighting machine of a common, but with the amount of fish I’d seen, I should have caught more. I know they love the bait and the rigs are right but those fish just didn’t seem to want to get onto bait. There was one other caught and that had been on a single hook bait so backed up my theory that they very much aware that they were being fished for.

I moved away from them in the end and set up on the opposite side of the pit, far away from where the fish were being stubborn but never saw another fish.

Until next time, I hope your lines are stretched to the limit. The river season starts in a couple of weeks and I for one can’t wait.