Home Blogs What bait are you using this year Shaun? 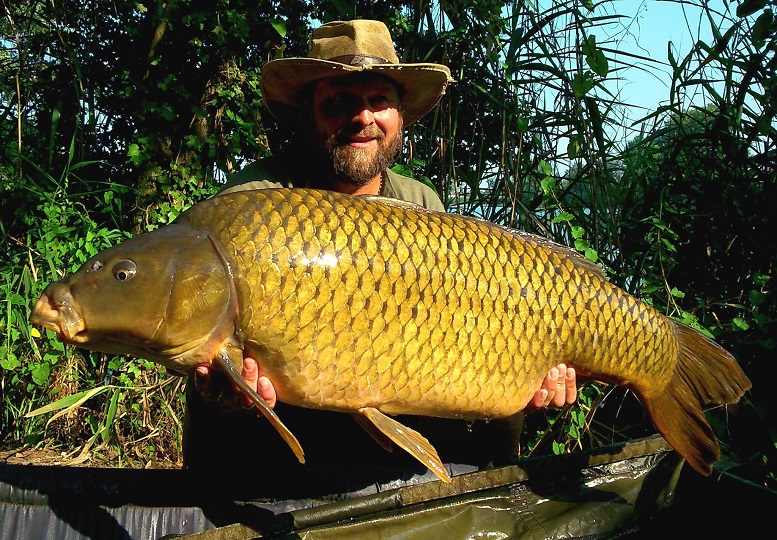 The Magnum even worked in the scorching heat of an Italian summer.

For several years I used nothing but Magnum White as my main bait, the bait I used as the main background feed and the bait I used to compare my latest experiments against. Right through from the coldest depths of winter, to the ridiculously hot conditions I encountered during an Italian summer trip which saw night time temperatures in the 40’s. I was catching so many fish everywhere with it that I saw little point in changing. But then I started to become concerned that I was only pushing one bait all of the time.

I often joke with people that the worst thing I was born with is a conscience; I can only ever say it how it is. I must admit, it does wind me up when I see fish reported on baits that I know they definitely weren’t caught on, blatant lies to help extract money from the trusting public is so wrong. Ah well, me and that conscience means that I will never be particularly rich in the money sense, but I do sleep very well at night with a totally clear conscience. 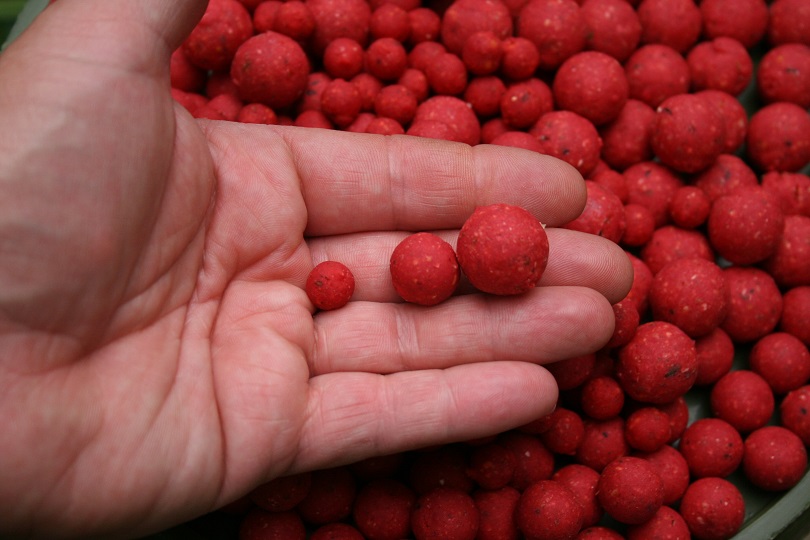 I went back to the Rahja Spice

So, this was the reason I pulled myself away from using the Magnum everywhere, I felt I should be singing the virtues of a few of the other baits in the range and went back to using the Rahja Spice which was a bait that had become like the Magnum for me, a take anywhere at any time of the year bait. To be honest it was only really customer pressure keeping on asking for new baits that steered me away from that one although it always remained the bait I used to compare any new boilie against before the Magnum. If they came close to holding their own at the side of the Rahja then they were worth all the effort of the final fine tuning of the most important bits within the bait.

2015 on the 10th anniversary of Quest Baits going public I decided to treat me to a season angling with baits that were already well proven and not mess around for most of the season with prototype baits that weren’t quite right yet. This is a side of things that most never see or possibly realise. All this nonsense with anglers claiming to be ‘field testers’ for this company and that is usually just that – nonsense.

Most are using baits where all the work has already been done and all they are doing is using a finished, completed bait to gather publicity pictures of captures on that bait. There is very little actual testing being done. I learned a very important lesson very quickly in the life of Quest Baits. I’d decided to use consultants/testers as you perhaps think they are used. So, once I was totally happy with a new bait after tests starting in the tank, moving onto my natural spring fed pool in the garden and then onto the wild fish in the lake I used to have, as well as two other waters where I was able to observe them feeding, I would finally let the ‘consultants’ have a batch and see what came back. I only ever did it once. The opinions were totally opposites. One felt a particular ingredient that could be smelt with our senses should be increased, whilst the next felt this same ingredient should be reduced in quantity. I had spent hours watching fish feeding on probably a dozen different variants of the bait before I was happy that I’d got it as good as I could get it and now two totally differing views. Then I sat back and thought…

“Hang on a minute I have been making my own bait since 1977, longer than those telling me have been angling. Do I need consultants”?

So I have continued to do all the tweaking of new baits myself. The downside of this is that for most of the season I am using experimental baits that aren’t quite right yet rather than just grabbing a bag I know will work. This brings us back to what I was saying and the 10th anniversary treating myself to a year of just using the ready proven baits, and what a season I had!

The following year I didn’t do the usual of launching a new boilie in the spring whilst dropping off another from the list, we just carried on with the same range. Yes, it costs extra inquisitive sales, but the range is now very well established and good baits are always good baits (so long as the company doesn’t start changing ingredients). 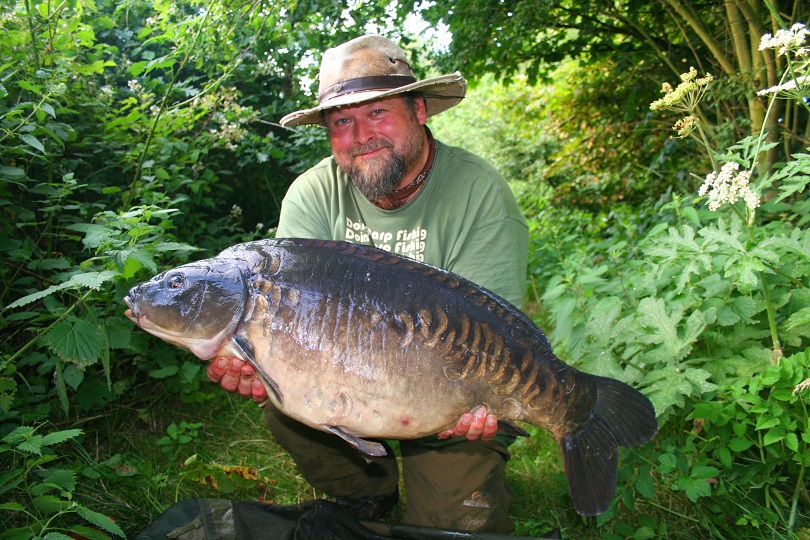 Whilst I was back on my beloved Rahja Spice and the first thing I noticed was that I was suddenly catching a strain of fish on them that I had not been catching many of on the Magnum’s (and people often ask me why I like to mix my baits up and feed different baits into the swim).  The main water I was concentrating on had a huge amount of natural food in it and I found it interesting winding back different hook baits with differing amounts of critter pot holes. To me, the more pot holes where the natural food had been eating the bait the better, as surely encouraging movement around the baits has to help attract carp. The natural progression continued and I found myself once again experimenting with different ingredients added to the already proven baits. Some of these were liquids and some were powders. The powders were simply added to damp boilies to give them a ‘Bon Bon’ type powder coating and this was where the Spicy Spirulina started to be born and there was me thinking I was treating myself to a year off of experimenting.

Last year I was using some barbel bait up that I’d prepared for a barbel trip that never happened and Spombed my Rahja Spice and Questrami feeder mix into my swim that already had the Rahja and Spicy Spirulina in it. The carp told me they loved what I’d given them and the Questrami was added to my then standard Rahja and Spicy Spirulina blend. The smell and look of the three baits together just seem so right to me and the carp certainly seem to agree. 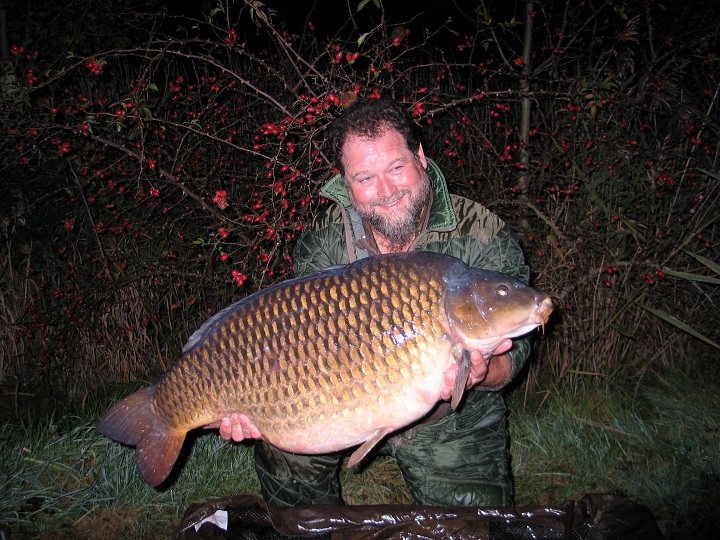 The start of the winter and they were still enjoying the three bait blend.

These three baits were mixed together in the same bucket so any being catapulted or Spombed would be around about the same ratio. I never had cause to alter my bait again and this is the blend I will be back on for this year. I only ever offered Rahja Spice hook baits or something totally different amongst this blend. I purposely never used the Spicy Spirulina or the Questrami as this way the carp should be getting more and more confident on these two baits that they have now eaten a fair bit of and never had the ‘bad encounter’ with, they aren’t expecting that ‘sting in the tail’ from one. I did similar on the Mangrove many years ago feeding one bait all summer and never fishing on it. When I eventually did, it was like feeding pigs cherries. Not that I have ever fed pigs cherries, but they tell me they love them.

So, that’s my carp bait for this coming spring, summer and autumn with the advantage now that if bites start to dry up and they start to get cagey with the Rahja hook baits, I have two other baits that have been fed for a while to switch to, using the carps limited intelligence against itself thinking that these sandy coloured and olive coloured baits are always safe.

At the moment whilst we are still in the grips of the cold water winter conditions I will still be plugging away with the Magnum White for I have honestly never used such a productive winter bait. One of my rods will still have the Rahja Spice on it for those other strains of fish as it is still a more than proven cold water catcher. 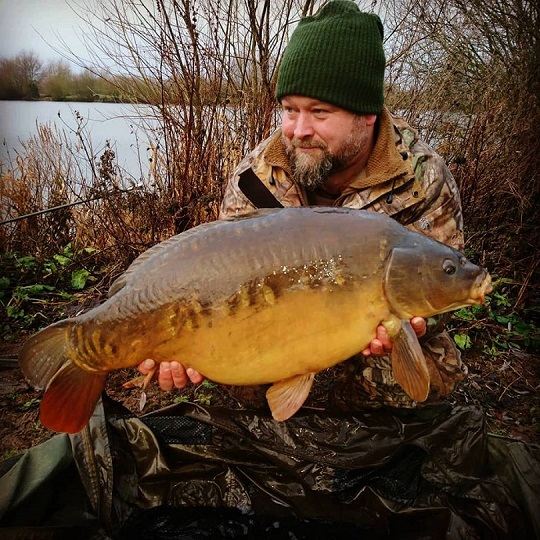 January 2018 and the Magnum White still producing so many winter carp.

So, we are well and truly into 2018 now and many will only just be starting to think about bait, as so many hang their rods up for the winter. This is why I have put off writing this piece until now. The sun is shining through my office window as I tap these words out and the frogs have started to reappear in my pool. The frogs reappearing in numbers always coincides with a few more carp being caught.

This year for the second time, I’m not releasing any new boilies, in fact we have dropped a lot from the range so as to be able to concentrate more on those that sell the best. The ones that sell the best are the ones that work the best for the customers, or they wouldn’t keep buying them. 2018 sees the following continuing as our main boilie range…

Special Crab – Our number one selling overseas bait, barbel love it too, this one comes into its own during the warmest parts of the year.
Rahja Spice – Summer or winter and particularly effective on silty lakes. I developed it for The Mangrove and that has literally thousands of years of silt built up. Barbel love it and chub too. This is the best winter barbel bait I have used.
Magnum White – What can I say? Carp wise I’d be happy going anywhere at any time of the year with this. Carp love the smell and taste of cream and it is without a doubt the best winter carp bait I have ever used and is the main food my fish at home get fed.
Spicy Spirulina – The naturals love this as well as the fish. I did have a customer complain last year that he stopped using it because everything else was eating it. An interesting thing on a water that I have fished for 18 year now, I had never caught a tench there, I’d never seen a tench caught there, yet my first cast with Spicy Spirulina, I caught a tench. The next trip I caught another! One of the biggest stimulants to kick carp off feeding is other fish feeding.
Questrami – Although I made this meat, fish and spice blend for the carp, it turned out to be the best barbel bait I have ever used (Rahja seems to only just top it in the coldest conditions).

So, there you have it, a long drawn out answer from what was a simple short question.
Best fishes
Shaun Harrison