Another month passes by and glancing back through the notes in my angling journal, it was once again a kind, if not rather mixed up angling month for me. I’d enjoyed a terrific run of winter carp, but with just 2 weeks of the river season still remaining I had forced myself away from the still waters to indulge in my other passion that is winter rivers. I was well aware that I had very much neglected the rivers so far this year and with lots of heavy rain lifting the levels so high, I just couldn't ignore the barbel any longer. 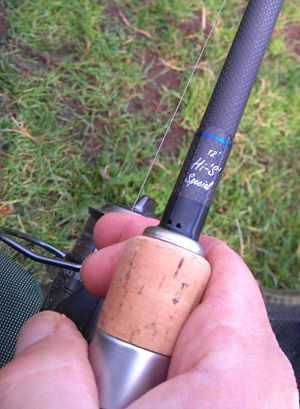 I had prototype rods needing to be tested.

This rise in water was also something I had been eagerly awaiting as I’d had a couple of prototype flood water barbel rods needed putting through their paces in my role as long terms Free Spirit Fishing Consultant. The rivers just hadn't been high enough to put them properly through their paces to try and find if they would be up to the job they had been designed for or not.

With the mighty river Trent spilling into the fields I couldn't think of a better test. My 5 oz feeders just wouldn't grip and hold bottom for more than a few seconds so the ‘big feeders’ had to come out to play. I found 7.7 oz would hold for a reasonable length of time on a crease and with those big feeders holding around 2 oz of bait I was really testing the rods casting ability with over 9 ½ oz being hurled out each cast and the two different rods I had with me coped with that abuse admirably.

After this first trip I soon made my mind up that one of the rods was just too stiff, whilst the other performed really nice and felt just the job although I hadn't had the chance to feel what it was like with a ‘proper sized fish’ on the end surging around in a big flow. 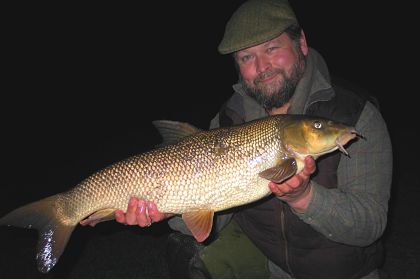 A great test for a new rod a barbel of 11.06 from a very flooded River Trent

Second trip and that was all put right when a barbel of 11.06 snaffled my 15 mm Questrami boilie and paste wrap. The rod handled magnificently, bending properly to absorb the violent lunges but being stiff enough in the butt to keep that 7.7 oz feeder up and out the way of the snags which were now increased with the water over the top of the banks and what is more important, I caught the fish in conditions that my other rods would not have coped with. I could have got a 7.7 oz feeder in place but I would have had issues playing a fish with 7.7oz hanging on the line in a huge flow and would very much have been a compromise rather than a tool perfect for the job. 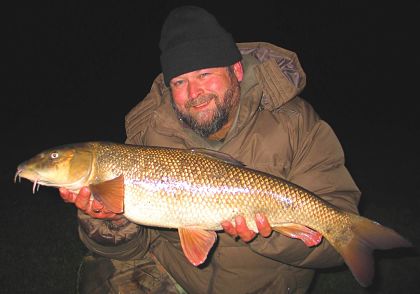 The barbel continued to come even in what were very cold bank side conditions.

My next couple of trips also produced barbel, chub and a bonus carp and I ended up finishing the season in love with one of the prototypes. My only criticism and something that is being put right now was that the very end of it just needed a little more ‘soft bite indication’ to clearly register a subtle winter drop back on an upstream cast. I don't usually mention much about putting prototype gear through its paces but having mentioned to a few barbel anglers at a show that I was currently testing some, they seemed quite surprised that so much actual testing and tweaking was done.

Well, with the river season over for another 3 months, my need to angle as much as possible saw me back after the carp. Last year I had made the decision to treat myself to a year of simply using the baits I have developed and proven for a number of years rather than sacrifice rod hours experimenting with new ingredients that may or may not prove to be as good as those already tested. This is part of my angling many don’t see. I am often fishing with baits (and tackle at testing time) that are very much inferior to those that I sell, whilst I develop different concepts and trying different ingredients.

Last year it was lovely to have a clean run from all of this, it was a birthday treat to myself, so, I basically ended up using the Magnum White and Magnum Duo for the whole year carp wise and I had my best year ever right through the summer and winter months. Now I should still be happy to simply keep catching plenty, but the fact of the matter, I get bored once I have something working really well. If I didn't I would still be using the Rahja Spice for all of my carp and barbel angling. So, my return to the carp this month saw me with the Questrami added to my  bait option with a few Rahja Spice boilies scattered in as I do like a splash of contrasting colour in any bait I use. I had developed the Questrami for carp but it also turned out to be a phenomenal barbel bait. now with not doing so much barbel angling this last winter I had some Questrami that needed using up.

A rather nice mirror took a shine to the doctored Questrami

Upon arrival at Stobbart’s N.N.E. winds were cutting through and had dropped the temperatures considerably, but it didn't stop a rather nice mirror getting its head down on my patch of Questrami. This had been a very welcome relief when I landed it as it had followed a fish that had got away with it a little earlier in the morning. I was using just 30g leads (as I do in cold conditions if I can reach them) and it had got off before I’d connected properly. The hook point was slightly burred on inspection so that bait had been played with prior to the brief encounter too. The tweaks I'd had I thought were fish in the area catching the line were obviously something moving the hook bait around. Larger leads I'd have had no indication. 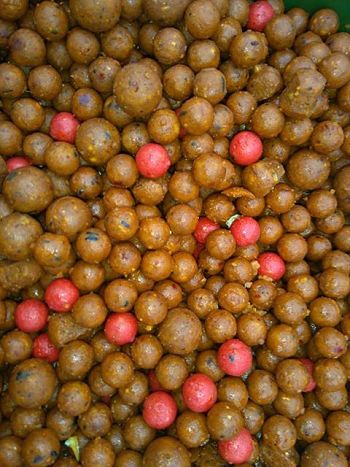 I had tweaked the Questrami a little as is the norm for me. Two days before angling I had added 50ml of Questrami Glug and 200ml of water to a kilo and a bit of boilies, the bit being one hand full of Rahja Spice boilies and one handful of larger baits with their sides trimmed off. By the time I was angling the baits had drunk their juice and were lovely and soft, almost paste like.

Well, another month has passed me by, a few more nice fish once again graced the net and now I look forward to whatever April has in store apart from another birthday. The second half century is being eaten into with more numbers being added after the 5, yet still I only feel like a teenager in mind, if not in body.