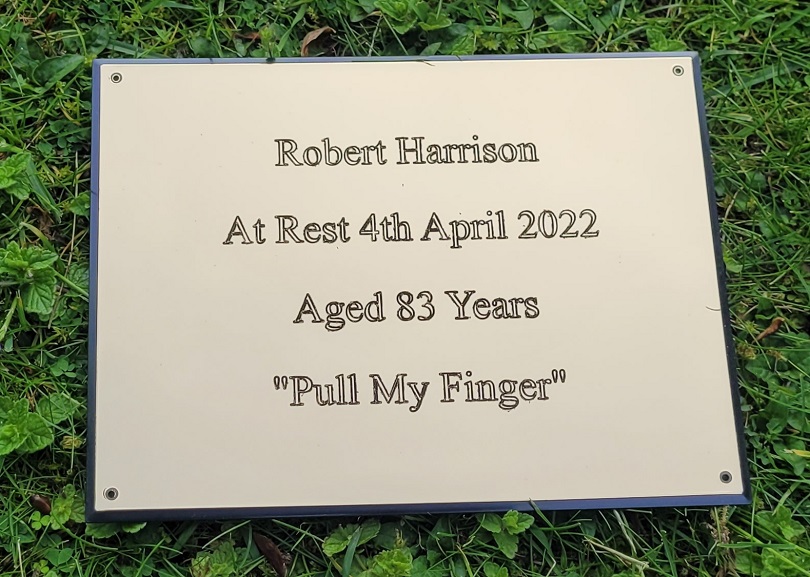 I went out for my usual two nights 3 days after the funeral, but my mind really wasn’t on it. I didn’t fish well at all and subsequently blanked. I hadn’t deserved to catch, my mind was all over the place, I was allowing myself to become distracted by the mobile etc, which meant minimal water watching. I did move for the last afternoon, but this token gesture did me no favours either.

The next session was similar. I went to a different venue and the daytime temperatures were high. I had plenty of fish in my swim high up in the 17-19ft of water. I flirted some floaters in, and they were having the odd one, but it seemed none of the larger residents. I refrained from making a cast for them as I didn’t want to risk spooking any larger fish that may have been slightly lower down in the water column. In hindsight I should probably have tried a zig but decided to let the fish continue to live their lives un-molested in front of me and hopefully benefit with the capture of a larger fish as the sun sank to the ones I could see. I didn’t – I blanked and when packing on the Sunday afternoon I knew only too well that I had missed out on a bit of fun on the surface.

From such a great April, May was appearing to shut its door on me. I guess I had been granted a lot of luck to help to keep my head high after dad’s death.

My third weekend wasn’t looking too conducive to catch a carp either. It was major work party time at one of the syndicates I’m a member of with a vehicle track being laid. It had needed doing since we took the place over as winter access had always been difficult. Yes, we could get to the lake, but barrowing was quite hard going in places with rutted ground and sticky clay clogging things up.

So, I volunteered 4 full days of my time and set about shovelling, raking, and flattening a large part of the 250 tonne of road stone we’d had delivered. I would have been better doing two days and then a few days rest before returning for another two days. But because we were short of bodies at the back end of the week, I offered myself. I cast the rods out whilst sleeping but it really was a token gesture after 10 plus hour of hard labour and then having to get cleaned up and cook dinner too. 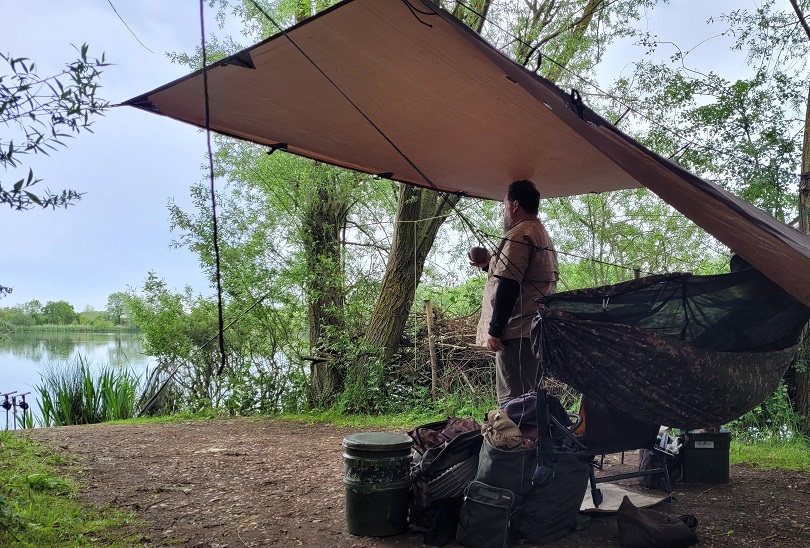 Not wanting to wind in for another day of heavy work

I kept feeding the swim though, so it had loads of rest from lines, even if the diggers, dumper trucks and whacker plates were vibrating the carp’s outside world all day long.

Sunday morning I was laying in my hammock not wanting to get up and face another hard days slog, when my close in rod burst to life and I found myself connected to a carp. I was aching all over from the previous day’s work, but my auto pilot set in and after quite a spirited fight I had a prize in my net. The 15 mm Rock Pool Rahja’s had been trickled in over the past three days, as well as a mixture of 10 mm’s (Rahja Spice, Magnum White and an experimental). The tufted ducks and indeed the coots, had been a pain and had both had me out of my hammock after picking up my hook baits on the previous nights. But, keeping faith in what I was doing, I had continued to feed via the catapult and eventually the carp had got a look in. 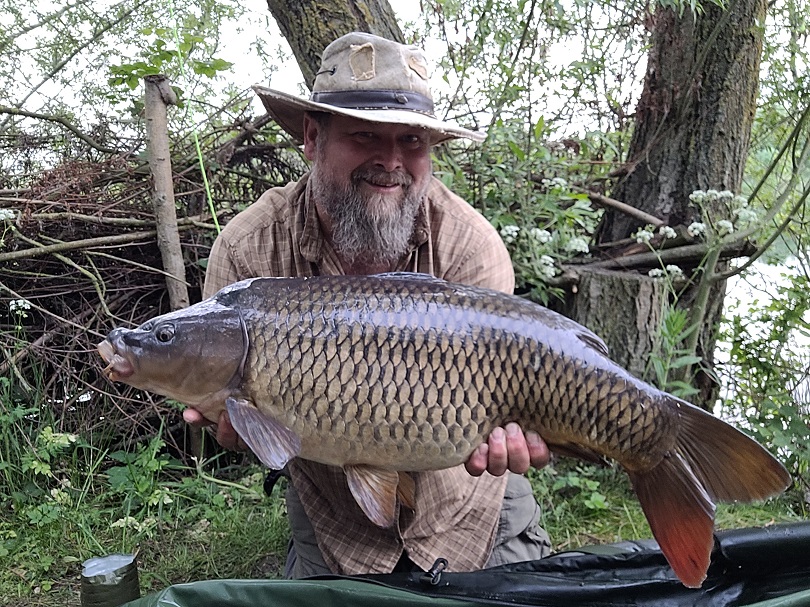 I still hadn’t recovered from the hard labour when I returned for the last weekend of the month. I had really felt like I had not properly fished all month, so had tried to make a little more effort to have a little more to write about in this blog. I always record the weather watching the areas of the country I fish every week. It is usually Thursday when I decide which venue, I would stand the best chance at. I have access to 5 different syndicate waters as well as a couple of club tickets with more carp waters. Each are very different, some deep, some shallow, some weedy, some clear. During high pressure, I prefer to avoid the deeper waters and as we were in the low 900’s on Monday and mid to high 1020’s due for the weekend, I chose a relatively shallow venue.

I was the 4th there when I arrived, although another had just left. I did a lap and typically the swims I fancied were taken, so my 4th choice it had to be. Because of the issues with the bird life, I decided not to introduce any freebies until after dark and simply relied upon three little clusters of bait. They have seen enough of my bait over the past couple of years to now know they like it anyway.

Friday night passed without incident, although I wound one of my rods in on Saturday with no hook bait, and another had been mullered by the aquatic life - the caddis larvae love the Rock Pool Rahja. The casting had been a little awkward too with a strong wind on Friday making pinpoint accuracy and the feeling down of the lead a bigger problem than usual. The features on this water are quite dramatic and less than a metre difference can mean a lot of difference to how you are presenting and what you are presenting on.

Saturday it looked like fish were starting to drift a little closer to me and with much lighter winds I was able to get the three rods perfect with a proper feel down. All three casts brought a smug smile to my face, I knew they were as good as I could get them. I now just needed the carp to travel the right path between the right bars.

First light Sunday and I found myself playing one. The water can be a little tough going at times, but I was fully expecting one. Eventually at the net and after lots of lunging around, it was beaten and gasping. On this venue, due to syndicate rules, we have to use the venues landing nets and weighing/unhooking gear. I have used 8ft plus handles on my landing nets for years now, so using the venues nets with 6ft handles seem short to me. I can’t prop them in place on my shoulder whilst playing a fish. Anyway, this fish was ready, so I reached for the net, positioned it and started to draw the gurgling carp toward it, then inches from the drawcord, the hook popped out!

Immediately I thought, had I been using my longer handles...

It was a kick in the teeth, it is very rare I pull out of carp. I re-cast and because I felt very tired still, I went back to bed and sulked, feeling very sorry for myself indeed.

It wasn’t long after though when another was away and after the usual tear around, I could see a stunning carp in the tap clear water ready for netting. Everything held tight this time though and a stunning fully scaled that I couldn’t recall seeing before was in the net. A perfect consolation prize from earlier. 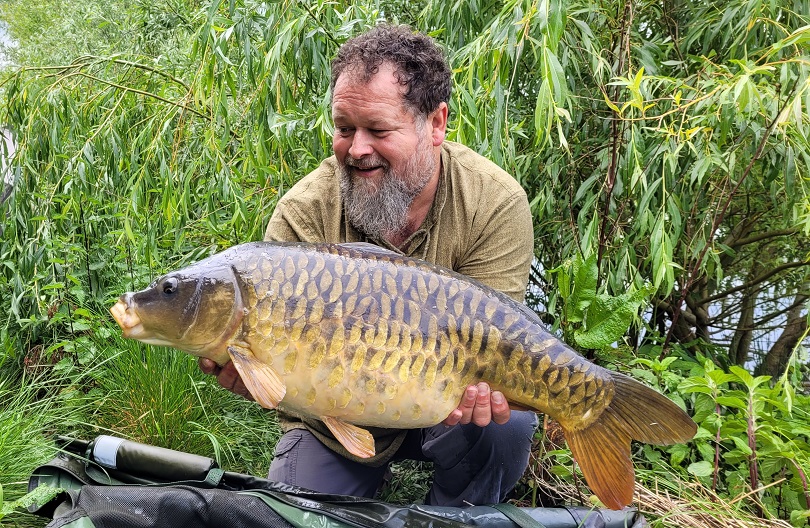 What a beautiful consolation prize after the fish I lost

I sat with a grin all day, if it didn’t show on my mouth, it was certainly there inside.
A slow pack down allowed me to get rid of the clutter of session gear. I much prefer to sit around with minimal kit. There was rain forecast so I had got the 45” brolly ready, just in case. At least the main kit could remain packed away dry until the next trip.

The afternoon was drawing on, but I was getting the odd tell tale sign not to leave just yet. Sometime after 5pm one of my Shaun the Sheep bobbins slammed up against the rod as the tip wrapped around and the line picked up fast through the water surface. I was on it immediately before the line had left the clip and straight away could tell it was a much larger fish. It took a bit of coaxing over two of the sharp bars which is always a good indication. Eventually in the edge I saw the flash of a long line of linear scales. Lots of head shaking and hugging the bottom just in front of me before I was able to get it to gasp air and painstakingly slowly it came over the drawcord, a little shake of the net saw it fold in. One look at it told me it was a very special fish and the second largest I have landed from that venue after 8 years of fishing it.

Scales confirmed what I knew and soon I was having my picture taken with it. 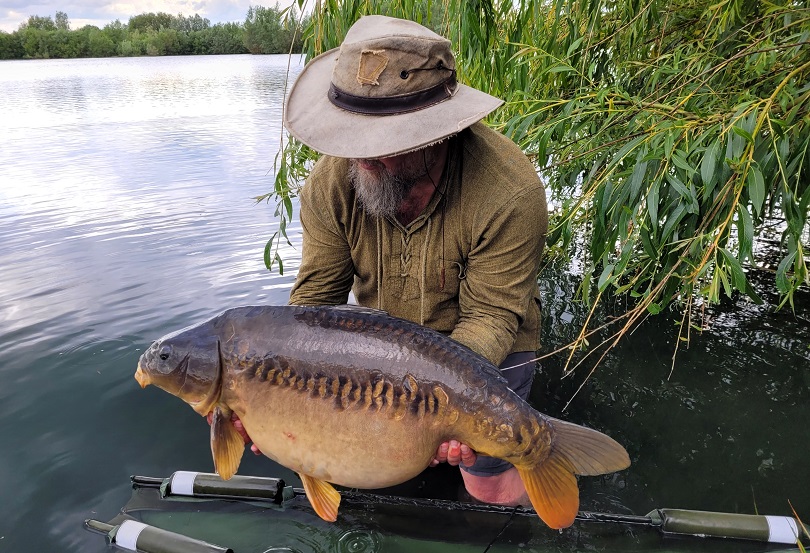 I never cast out again, I didn’t feel the need. I simply had a final slow pack up, loaded the Land Rover and pointed it homeward bound.